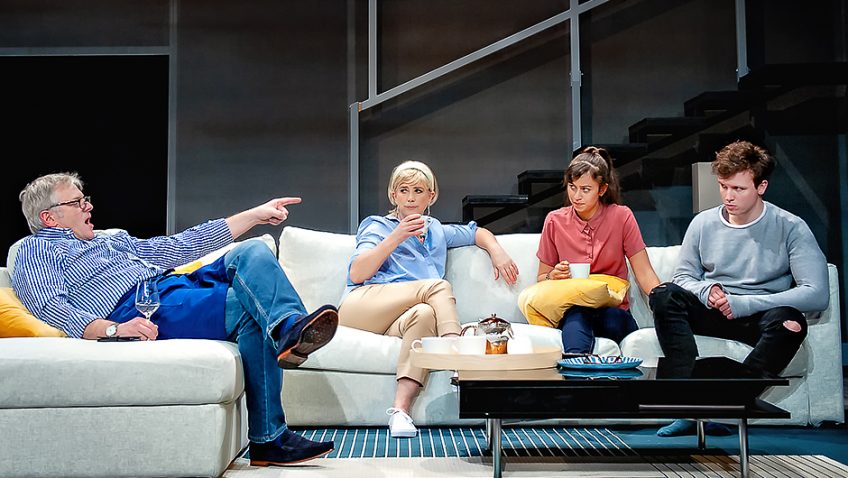 World Premiere of The Be All and End All

Emotions pummelled, brain scrambled, no one leaves whistling a happy tune. Playwright Jonathan Lewis hopes his pithy play will stimulate debate, but, like a boxer after a series of tough bouts, you’ll need time to recover first. You’ve just shared in the traumatic disintegration of an entire family, after all, their fraught, ambiguous relationships brought so vividly, so convincingly to life by superb acting that you still wonder what happens to them next as you spill, punch-drunk, from the glorious intimacy of the York Royal Theatre and onto the street. 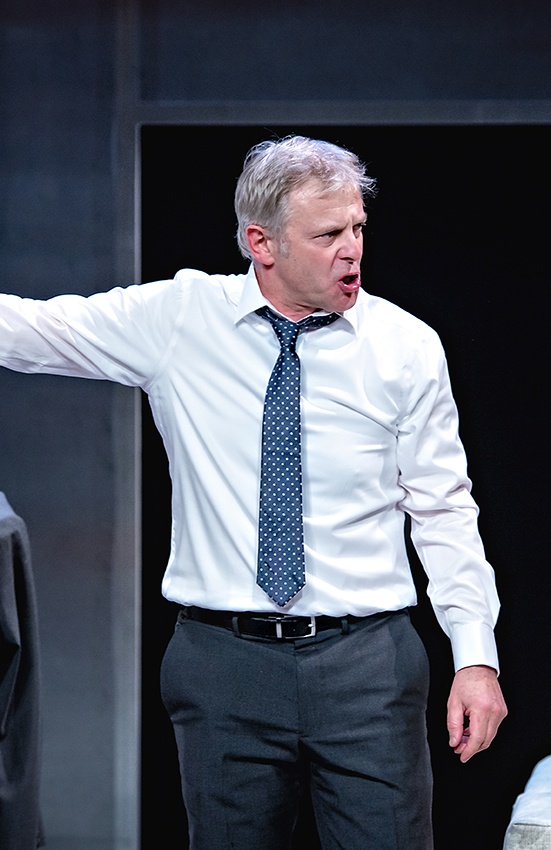 Jonathan Lewis in The Be All and End All

Natasha Bertram’s handsome set with its neat open-plan geometry, fashionably impersonal modernity and Waitrose-laden fridge sits us in a well-off, middle-class home. The space may be open-plan; the family relationships are anything but. With the freedoms, independence and abundant downtime enjoyed by former generations of children no longer on offer, the interactions of 18-year-old only son, Tom, with parents, politician Mark, and high-flying publisher Charlotte, are full-on, claustrophobic and suffocating. Largely, it’s the misguided aims and targets of our competitive exam and education system that are heaping overwhelming pressure and stress on them all. The eventual, violent implosion of this onstage family is extreme, yet bells will clang with families nationwide, up and down the social ladder, at both state and private schools.

In today’s one-size-(never)-fits-all education business, there’s no time to nurture creative passions or a love of learning in individuals like Tom. Everyone must aim for the stars – the A*s. Even a ‘B’ is a disgrace that will destroy forever any hope of success – or so the parents see it. By the time Tom sits ‘A’ levels, pressures from school and parents alike, built over years, have him at the severe melt-down end of his mental tether.

Matt Whitchurch is tremendous as vulnerable, secret self-harmer, occasional drug-taker Tom. He conveys the volcanic overspill of anxiety, unspeakable distress and internal torture so spot-on, it’s vividly real. No one listens to what Tom wants and he can’t take it much longer. Nothing but galaxies of A*s and an Oxbridge place will do for his parents. Convinced they act purely out of love and that all they want is what’s best for their son, they ignore his desperate pleas, while his father’s string-pullings and abuse-of-privilege manipulations escalate insanely into gross immorality, bribery and corruption. For him, the end justifies the means, and what you can get away with is all that matters. (Well, he is an MP).

Playing breezy, sleazy Mark MP, during the Brexit referendum, is the playwright himself, Jonathan Lewis. He has his light and witty side, his impressions of a certain wiff-waffing Mr Johnson going down well, but exudes a natural air of superior entitlement and self-importance, and an unbending determination that Tom will fulfil the ambitions he decrees, no matter what. Spot-on, too, as caring mother Charlotte, keeping her career going through cancer, is Lewis’ real-life wife, Imogen Stubbs. Her love and ambition for Tom and concern for his future have her, like Mark, constantly on the poor boy’s case, but, as events reach explosive, unexpected heights, will she, Tom, and girlfriend, Frida, also sink to Mark’s immoral depths? The dynamic interaction of the four fine actors is brilliant. 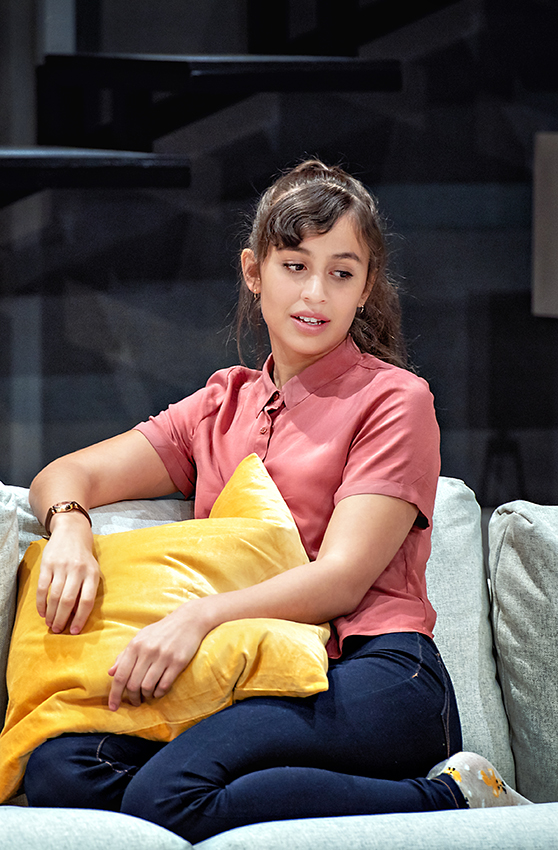 Robyn Cara in The Be All and End All

Scholarship girl Frida, academically brighter than Tom, unlike him, has been left in peace by her single Portuguese chauffeur father to enjoy her studies without pressure. She recognises more clearly than Tom’s parents the toll that never-ending stress is taking on him. Robyn Cara portrays Frida beautifully as a sweet, understanding, caring, pretty mature, well-balanced girl, but one still not entirely carefree, nor immune from being swayed to the dark side.

For the most part, Lewis’ dialogue is natural and punchy, though the risk of racing into rant and overlong, preachy protestation is only narrowly avoided in the opening scene. He might risk, too, overburdening the piece with a multiplicity of weighty issues – abortion, adultery, cancer, the generation gap, drugs, self-harm – but alas, these days, a complex cocktail of major problems is no longer the sole preserve of soap opera families.

With serious events and intense emotions riding furiously towards physical violence and tragedy, the audience needs breathing spaces. Voice and video clips (- from ‘Charlie Bit My finger’, Boris snippets and a war game video to childhood photos, cracker jokes, dance music and The Seal Chorus) add lighter variety, while witty banter and humour are strong throughout. Indeed, when Charlotte’s unforgivable ‘between Tom and I‘ is triumphantly corrected to ‘between Tom and me‘ ,hearts lift sky-high!

Though the dance routine in Act I seems somewhat contrived, Tom’s trumpet solo finale is painfully poignant. In sad, defeated triumph he stands, Christmas cracker crown on his head, playing his heart out in a magnificent, soulful rendition of I Get Along Without You Very Well. (If only they’d let him!) Everyone has a song to sing, Tom tells us, but not everyone gets the chance, and with our senseless obsession with misguided measurements, tables and statistics, songs are being stifled left, right and centre. But just as Chet Baker was determined to play trumpet again even after his teeth were smashed, maybe there’s always a glimmer of hope.

The play travels next to Colchester and Windsor