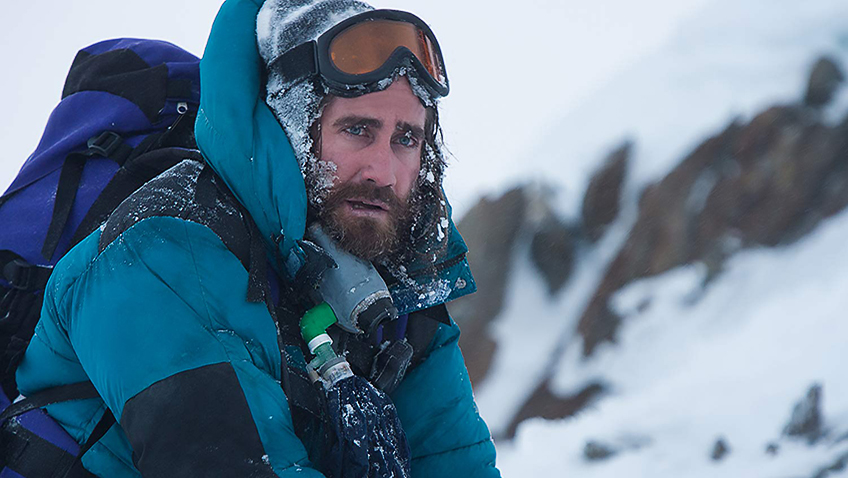 : not the mountain itself, but certainly this 3D disaster blockbuster movie, based on real life events that resulted in eight deaths on 10-11 May, 1996. Everest

is an engrossing entertainment extravaganza, but as a story, it’s a bit of a dog’s dinner. Someone forgot to provide the story with the same focus reserved for the Imax cameras while characters become unidentifiable under snowsuits and icy faces. Everest

wants to be a disaster movie, adventure thriller and a quasi-documentary about the modern-day Everest Experience, while at the same time, telling individual tales of true love, self-sacrifice and redemption.

First of all, it is helpful to put things in perspective. Ben Nevis, the UK’s highest peak, is 1,344m while the base camp on Everest

will put you at 5,335m (17,500 ft) where many might already be in need of oxygen tanks. Reaching the summit at 8,850m (29,035ft) is fraught with danger, but in Everest, it is the descent that proves fatal due to the knock-on effect of an overcrowded summit.

It is from base camp that at least two rival expeditions, Rob Hall’s (Jason Clarke) Adventure Consultants and Scott Fischer’s (Jake Gyllenhaal) Mountain Madness set out, each planning to ‘summit’ during a narrow window from 12:30AM to 2PM (the latest safe turnaround time) on May 10, 1996.

Only three of Rob Hall’s 8 clients, who paid large sums of money to summit with Hall and his two assistant guides, have high-altitude Himalayan experience. That said, 49-year-old Beck Weathers (Josh Brolin), a wealthy Texan doctor recovering from eye surgery is making a bid for the Seven Summits, along with 47-year-old Yasuko Namba (Naoko Mori).

In between base camp and the summit Hall’s team has to cross deep crevices on flimsy ladders suspended in mid-air; deal with degrees of altitude sickness that can impair judgement; queue-up at ‘The Balcony’ where sherpas and guides neglected to set fixed ropes; and get frost bite thanks to a bottleneck at the 40-foot wall of rock and ice known as the Hillary Step.

This man-made bottleneck, and giving in to a straggler who wants his money’s worth, causes Hall to miss the 2PM turnaround limit. These obstacles are topped off with high winds and an avalanche that set in just, as forecast, just after 2PM. We experience all of these horrors from the increasing discomfort of our cinema seat. 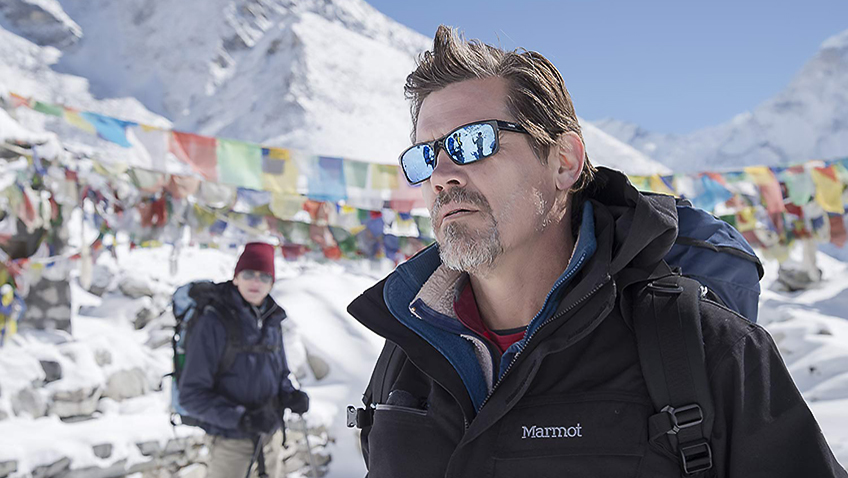 never answers client and journalist Jon Krakauer’s (Michael Kelly) question about why people risk their lives and bank accounts for a mountain, those who prefer getting their thrills from the top of Murray Mount, won’t be convinced by any answer. A doctor (Elizabeth Debicki, the evil billionaire in The Man from U.N.C.L.E.) briefs the group on the dangers, symptoms and cures of mountain sickness and pulmonary edema, although it is difficult to capture the feeling on film. What Kormákur does communicate in his usual visceral style are the dangers, the scale, the height and the cold. With dizzying aerial shots, and Salvatore Totino’s superb Imax location shooting in Kathmandu, the Italian Alps and Everest’s base camp, you’d be forgiven for imagining the air-conditioning was on in the cinema.

The real problem is not the lack of an extra jumper, but, with the knowledge that 1 in 4 climbers succumb, the lack of a story. This is not for want of the filmmakers trying. There are ardent attempts to carve a couple of stories and heroes out of the general drama and a large ensemble cast. We figure out that Scott Fischer used to work with Rob Hall, but Fischer started a rival company with no love lost between the two. When we meet Fischer, he is sunning himself at Base Camp, drinking heavily and injecting himself with some drug (either for altitude sickness or pain). He nonetheless proves to be a responsible guide when he agrees to cooperate with Hall in synchronising their climb schedules. He also risks his life going to the aide of one of his clients. Despite Jake Gyllenhaal being the most famous actor in the film, Fischer’s story is sketchy and underdeveloped.

From the first scene to the last, the film returns periodically to the love story between Rob Hall and his wife pregnant Jan (Keira Knightley), worrying about Rob from their home in New Zealand. Heart strings are targeted, but we are somewhat numb by the final tear-jerking moments. Similarly, Weathers (Brolin), while not a very sympathetic character, emerges with a storyline, probably because his no-nonsense wife (Robin Wright) has the contacts and money to mount a helicopter rescue operation for her frequently absent husband. John Hawkes’ Doug Hansen might be the only postman climber, but he’s too weak a character to merit a story. Sam Worthington is given little to do as Guy Cotter while Emily Watson spends the film with a phone on her ear as Hall’s administrator and organiser at base camp. The drama of these stories, and even the realisation of which of the climbers are dead, is obscured by our inability to identify bodies covered in hats and ice.

is at its most interesting when it casts a critical eye on the very heroes of the film by suggesting how the proliferation of commercially-motivated guides is doing more than just polluting the mountain. These companies not only cater to, and attract amateur climbers ill-prepared for this ultimate challenge, but are also responsible for the overcrowded conditions on the mountain that led to the May 1996 deaths.