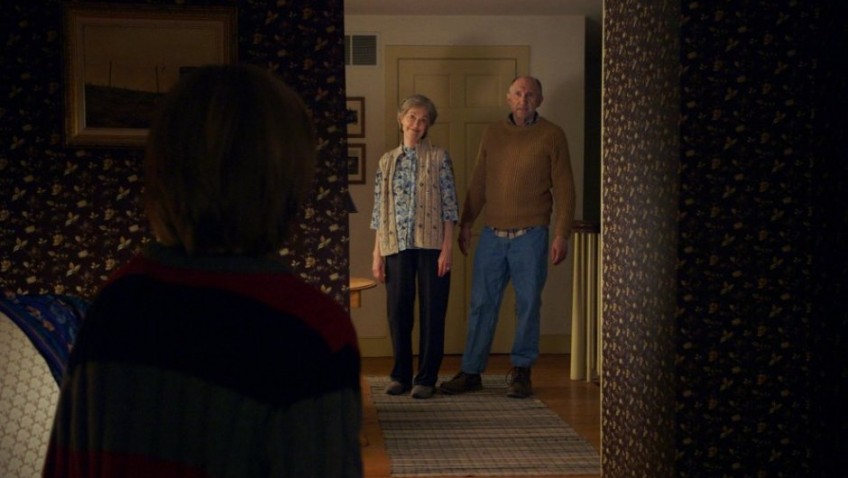 The Visit is the latest film from the Indian-American auteur M. Night Shyamalan (The Sixth Sense, Unbreakable, Signs), the man who all but invented the metaphysical spooky blockbuster genre and was not shy about asking A-list stars like Bruce Willis, Samuel L. Jackson and Mel Gibson to add to his films’ box-office appeal.

There was a time when the last three words you would apply to a film by Shyamalan was ‘a squandered opportunity’; but despite a few scary scenes, The Visit, with its promising premise, is just that.

The Visit is a low-budget, straight horror film with comic touches, a trade-mark Shyamalan ‘twist’ towards the end, but no big stars. It is as though Shyamalan did some soul searching after reading the reviews of his commercially successful, but critically panned The Last Airbender (2010) and After Earth (2013) and wanted a fresh start. When Paula (Kathryn Hahn), a hard-working single mother, is invited on a cruise with her boyfriend, it seems the perfect opportunity for her mature daughter Rebecca (Olivia DeJonge) and Rapper younger brother Tyler (Ed Oxenbould) to meet their grandparents and spend quality time with them.

In a series of narrated scenes, Paula, a somewhat unreliable narrator, tells us how she became estranged from her non-conventional parents 15 years earlier when she eloped with her high-school teacher, who subsequently deserted her.

The enterprising Rebecca plans to document the visit with her video camera and enlists a reluctant Tyler’s help with a B-camera. The visit starts off perfectly, with grandparents, John Jamison (Peter McRobbie) and his wife Doris (Deanna Dunagan) meeting the kids at the station and then showing them around their comfortable, rambling farm house.

Doris is a divine cook, the grandparents organise sight-seeing trips and there’s plenty to explore around the house. But there are a few rules. The basement is off-limits due to toxic mold and, as Doris has some health problems, it’s best that the children not leave their rooms past 9:30, the grandparents’ bedtime.   This curfew was imposed after Rebecca left her room for a midnight snack and was horrified to see Doris projectile vomiting.

Grandpa explains to the children that ‘it’s just a stomach bug. She’s an old lady. She gets sick sometimes.’ Throughout most of the film, the odd occurrences (Tyler finds piles of large, soiled nappies in John’s woodshed and bizarre behaviour (John assaults a man he claims is following him; Doris walks around naked and spills cookie batter on the children’s computer, etc.) are repeatedly attributed to the age of the grandparents.

On a Skype call to their mother, Paula reassures the children, remembering that they were always odd, and now they are old, John tells the children that ‘People are afraid of old people for no reason,’ unleashing the film’s dramatic irony. Meanwhile, volunteers and even a former patient from the health centre where The Jamison’s are supposed to be volunteers, come by (always when the grandparents are absent) and mention to the children that they are concerned as the couple has not shown up at the centre recently.

There are, to be sure, some truly scary moments in the film and the premise is a corker. It’s a simple, but ingenious way to get two fun-loving, normal young children into an isolated farmhouse and Shyamalan has not lost his touch when it comes to spooking us out, while creating doubt.

But in order for a premise like this to work, the audience needs to believe that a mother would entrust her two children to two older relatives whom she hadn’t seen in 15 years and from whom she is estranged.

We expect she would want to know that they could see well enough to drive, were sufficiently mobile to care for two energetic children, had adequate heating, etc. We have no evidence that Paula had even spoken directly with her parents prior to the visit and there is some evidence that she had not.

We also have to believe the documentary film premise that is as tedious as it is convenient to the point of being contrived. The filming is a variation on the hackneyed ‘found footage’. When it isn’t obvious that neither Rebecca nor Tyler is filming the proceedings, it is obvious that they would be too frightened to think about picking up their cameras.

The ending feels rushed and, in ignoring the basic questions the family and police would be asking, proves unsatisfactory. While it is perfectly acceptable for a filmmaker to leave the audience to piece together certain aspects of the film, he has to provide the clues to enable us to do so.

The tone of the film is another problem. Shyamalan reported waited until the editing process to work out the tone of the film, which is probably not wise. It is still difficult to know whether we are supposed to laugh as in an art house parody or scream as in a Cineplex slasher/horror film.

None of the laughs, but a lot of irony and parody, derive from the attribution of all manner of unpleasant occurrences to old age.