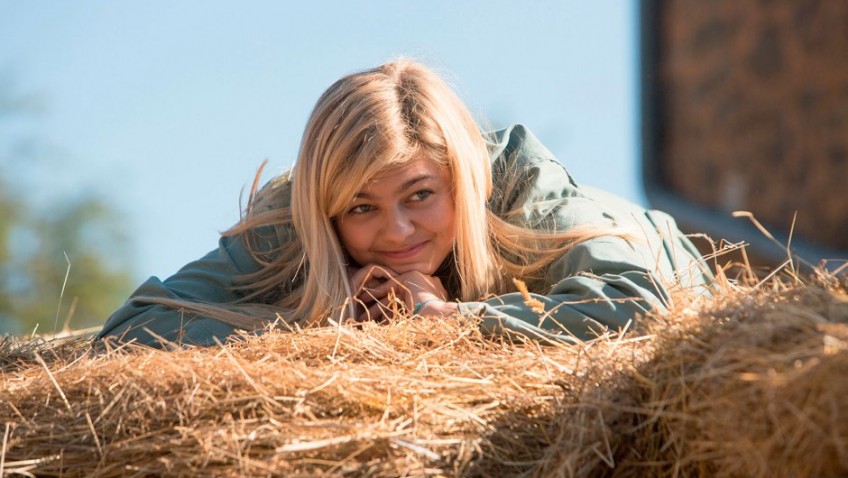 Director Eric Lartigau, who directed the excellent morality tale and thriller The Big Picture, does a pretty good job of disguising what is a formulaic and familiar story (by co-writer Victoria Bedos and two others) about a teenager’s struggle to pursue her dreams in the face of obstacles – chief amongst them her family.

If you can stomach another movie where the tension derives from the build-up to a climactic audition or competition, go see La Famille Bélier for Louane Emera’s moving rendition of Michel Sardou’s Je Vole (I Fly or I Am Flying). This is a beautifully directed, tear-inducing scene that is worth the price of admission.

One of the ways in which Lartigau disguises the clichés is by putting the heroine, Paula (Emera) on a farm in rural France (Lassay-les-Chateaux in Mayenne) and by giving her two parents, Rodolphe (François Damiens) and Gigi (Karin Viard), and a younger brother (Luca Gelberg), who cannot hear or speak.  Paula not only helps her father on the farm but has to deal with the bank on behalf of her father, translate for the doctor and help out in the family business on a regular basis. When her father, fed up with the patronising mayoral candidate, decides to run for mayor despite his disability, Paula’s cumulative duties begin to conflict with her decision to sing in the school choir.

The filmmakers want to show us a hardworking, loving, fun loving family who contribute to society and are normal, but for their disability, and their over reliance on Paula. The characterisations are not, however, successful, for the parents, Rodolphe (François Damiens) and Gigi (Karin Viard), are turned into into oversexed buffoons.

It is the three deaf characters, in fact, who provide what is supposed to be the humour in the film through their hyper-active antics and explicit sexual language and references. This is awkward, if not offensive, as it seems like we are supposed to laugh at them, as it’s hard to laugh with them.

Mothers, for instance, do embarrass their children, but, when Paula gets her first period when her handsome Parisian school mate Gabriel (Ilian Bergala) is over for choir practice, Gigi parades the blood-stained underwear around the kitchen.  What mother would do that? The deaf community all over the world has been up in arms, not only about the portrayal of the family, but about the fact that only Luca Gelberg (the brother) is actually deaf. Damiens and Cesar-winning actress Viard, have learned to use sign language very well, but are known in France for their speaking roles.

Elsewhere, there is no hiding the cliches, which include a saintly choir director, Fabien (a parodied performance from Eric Elmosnino); a handsome boyfriend, who disappears from the film after he has served his purpose; and what is not real opposition so much as a misunderstanding when it comes to the family’s conflict in giving way to their daughter’s dream.

The film also feels contrived in that Paula is not only the sole member of the family who can speak (none of the outsiders ever ask about this), but she has a beautiful voice that the family cannot appreciate. Is the spectre of Beethoven supposed to be hovering over us? The story rightly focuses on Paula’s guilt and feeling of responsibility for escaping the family’s affliction, but the family’s reliance on her as interpreter is a form of child abuse that we are supposed to excuse.

You might also wonder why, given Gigi’s extensive wardrobe, the luxurious interiors to the farmhouse and the family’s ability to fund a mayoral campaign, Rodolphe does not simply hire a farm hand to help out and allow his daughter to focus on her studies. The reason to see the film is the musical set pieces, even if what promises to be an exquisite duet of Je vais t’aimer (I’m Going to Love You) between Gabriel and Paula becomes artfully and poignantly muted during the school recital. This helps us imagine what the family experience when they “hear” her singing for the first time.

We have previously heard enough of the song to know it’s a beauty, and the unexpected, muted performance asks the question: can Paula’s parents understand her passion or appreciate her talent when they cannot hear her as others do?

The climactic Je Vole is played out in full. It comes as a surprise to the viewer as Paula has substituted the light-hearted song, En Chantant, which we hear her rehearsing with Fabien, for a love song to her parents, announcing her decision about her future.

In fact, Sardou’s 1978 song is actually about an adolescent who is about to commit suicide, but here, it is given a more upbeat and affirmative, but touching, interpretation prompting one of the judges to say “good choice”.  Louane Emera might not be a natural-born actress, but the 2013 semi-finalist in France’s reality TV-show The Voice pulls off this finale in a surprising fashion.