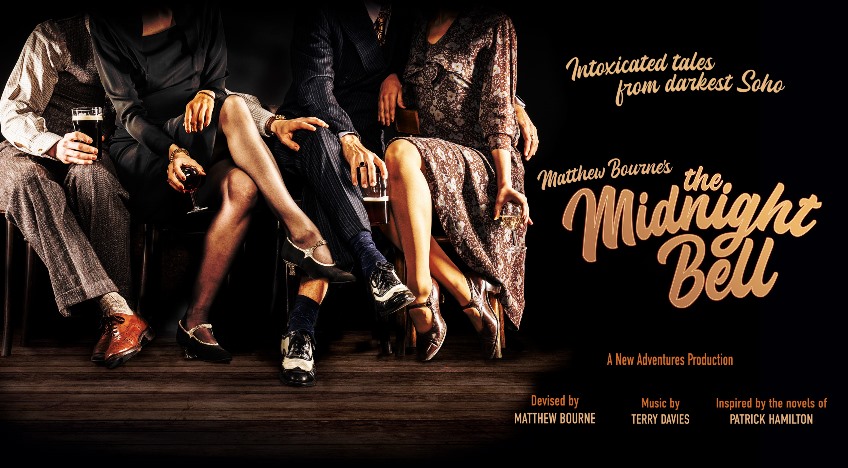 Little by little, a growing intensity of drama, music and movement draws us in until we are thoroughly engulfed in the emotional turmoil of an intriguing onstage world, conjured up by the combined, mighty forces of dance storyteller, Matthew Bourne, composer Terry Davies and set designer Lez Brotherston. Amidst a stage filled with the constant, restless comings and goings of lonely, isolated people, desperately yearning, relentlessly searching to find love and warm human connections, distinct characters emerge and develop, whom we believe in and care about, especially when their hopes and dreams turn, all too often, into dark nightmares with painful, poignant twists in their tails/tales as Brief Encounters turn into The Scream.

This is London in the late 1920s/30s, but we’re not in the privileged world of glittering wit and flighty flippancy of a Noel Coward creation; here, we share the lives of poorer, everyday people whose existence revolves around seedy bars and pubs like The Midnight Bell and in the dance halls, shabby, rented rooms, and the dark, brooding streets of Soho and Fitzrovia. Recreated by Bourne, this is, in fact, the world of novelist and playwright Patrick Hamilton. The famous, classic films Rope and Gaslight are Hamilton’s creations, but he’s revered, too, for his novels set in this 1930s downmarket world that he knew so well himself. Drawing upon The Midnight Bell, Hangover Street, 20,000 Streets under The Sky and Slaves of Solitude, Bourne mixes, matches, and adds to Hamilton’s stories and characters to recreate this vibrant, agitated slice of life.

Winning special appreciation is the poignant story of two gay men who cannot dare be themselves in an era when homosexuality is a criminal offence, beautifully danced with tender enfoldings that must be hidden and denied. There’s ample applause, too, for the drunken husband, his increasing torment almost palpable as he’s driven to the edge of madness by a wife he adores but who just won’t keep away from other men. Other characters made real are the reserved spinster, deceived by a conman, the foolish older man who falls for the young barmaid, and the young man who is infatuated by a prostitute rather than the barmaid who coyly fancies him. The strong acting skills of the entire cast extend into every detail of bodily and facial expression to accompany meticulous dance performances as we’re steered through the bumpy, emotional journeys of the characters with their intense interactions and complicated relationships.

A Lez Brotherston set always provides beautiful entertainment in its own right, of course, whilst evoking precisely the era and atmosphere of the drama. Expertly lit by Paule Constable, dark brooding clouds sit above silhouetted chimneys and rooftops, streaked with varying sunset hues. In the gloom, lampposts, lit windows, street names, signs for rooms, dance hall, pub and cinema set us down in this seedy, claustrophobic Soho world. Suspended about the stage to represent buildings beneath are elegantly shaped windows and a cut-off red phone-box canopy for innovative phone-call dance solos. With imperceptible magic, the street disappears in a smooth instant to set us inside the boozy, smoky Midnight Bell, in a dance-hall with gigantic, dazzling glitter-ball, or in Lyons tea-rooms or seedy rented room with shabby bed.

That so many props are so smoothly and elegantly choreographed into the dancing is another admirable achievement – coats, hats, trays, glasses of drink, tables, chairs, an indispensable park bench, and even an entire bar, all glide around with the same apparently effortless flow as the busy dancers as they spin, weave, writhe, intertwist and intertwine. Solos, duets, love triangles and mix ‘n’ match ensemble partnerings run the gamut of emotions from naiveté, innocent joy and tender shyness, through infatuation, obsession, lust and raw passion to frustration, despair, intense mental torture, anger and violence – but with a measure of welcome humour, too. And all is achieved without words – well, apart from in the songs – yes, the songs.

Terry Davies’s music enfolds this drama of emotions magnificently with an impressively broad and varied score full of endlessly interesting instrumentation, climaxes at key moments and some thrilling use of percussion. Incorporating restless, foreboding pulsings, unnerving vocal siren-call wailings, intense tinnitus screechings and warmer, tender-toned, lyrical moments, the score also integrates authentic 30’s songs, mimed by the characters (as in The Singing Detective). These work fabulously well as light relief whilst conveying real meaning: The Man I Love, The Nearness of You, In My Solitude, and the sentiment echoed perplexedly by all, What Is This Thing Called Love? Paul Groothuis’ soundscapes and sound-effect Soho dogs, rain, pigeons and footsteps and the like contribute further to creating the feel of a real world, full of doom, gloom, isolation, emptiness and pain but also beauty, hope and spellbinding moments.