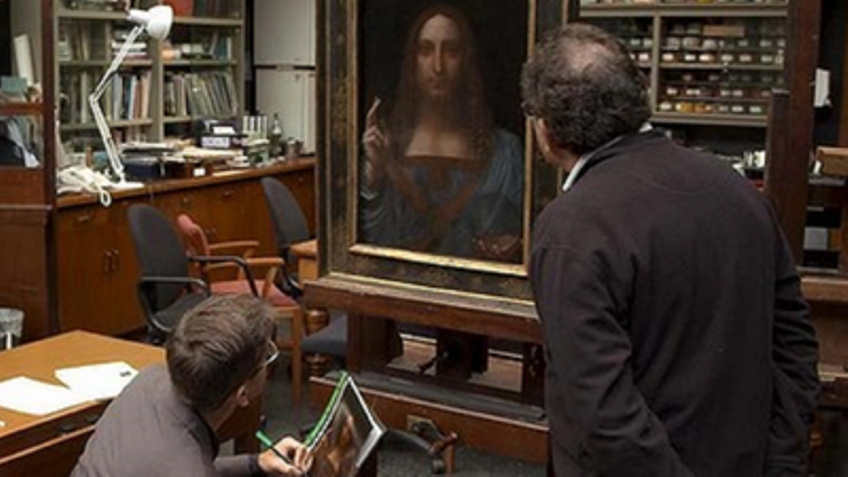 A riveting, if alarming journey through the murky international high end art market.

Andreas Koefoed’s engrossing documentary, The Lost Leonardo, starts where Nathanial Kahn’s terrific 2019 documentary, The Price of Everything, left off. Kahn concludes his film with the announcement that the Salvator Mundi, attributed to Leonardo da Vinci, had just sold at auction at Christie’s for $450 million – a record.

Kahn’s film was about the high-end contemporary art market in America, where the late Chicago art collector and philanthropic museum donor Stefan Edlis hints that online buying and selling tends to cheat the taxman. Koefoed focuses not on contemporary art, but on the international old masters arena, where art is such a cutthroat power game that tax avoidance is a given and philanthropy is not even mentioned.

Kahn’s film analysed the impact of market forces on various contemporary artists and collectors. Koefoed’s film is focused on only one artist, the Renaissance genius Leonardo da Vinci, whose paintings are all the more costly for being so rare. Only 15 verifiable Leonardo’s existed in the 20th century. In 2005, some hundred years after the last attribution, a painting, circa 1500, in bad shape, but of singular power, pops up in the catalogue of a New Orleans’ auction house. It is purchased for $1,175 by Sleeper Hunter Alexander Parish with his consultant partner, Robert Simon.

A Sleeper is a masterpiece that has slipped through the cracks and/or a work wrongly attributed to a lower artist, and the Hunter is the patient, meticulous person who looks for them. Early on, Koefoed shows the trajectory of Parish’s find from New Orleans to NYC to London in 2005 ($1,175); from London to Geneva in 2013 ($83,000,000); from Geneva to Paris in 2013 ($127,000). And finally, from Geneva to Saudi Arabia in 2017. This trajectory highlights two important points.

First, a hard-working Hunter needs only one Sleeper and a few lucky breaks to justify the years and expenditure in research, waiting and marketing (Parish added a third partner, art dealer Warren Adelson to his team). The second point is that if Hans Christian Anderson were writing today, he might have had the Salvator Mundi in mind when he wrote The Emperor’s New Clothes. Koefoed juxtaposes the duped experts with the cynical art critics and the sycophants with the principled sceptics.

Parish and Simon’s first task is to get the painting authenticated, and here they luck out. A chain of events collides with an illustrious array of experts, who, nagging doubts notwithstanding, express the collective will to see a new Leonardo.

Koefoed spends more time following around Diane Dwyer Modestini than any other single contributor, as though awaiting a confession. With her stellar CV, and status as the other half of the famous Italian art restorer Mario Modestini, Modestini worked on the restoration of the Sleeper from 2005 to 2012, and perhaps after. Before his death just after the Sleeper arrives in New York, Mario apparently tells Diane: ‘It’s by a very great artist. I don’t know who it is but it’s the generation after Leonardo.’

The price would have been high with “by the workshop of” Leonardo, but Diane bases her positive attribution on two main factors. One, cleaning reveals the artist had changed the position of the fingers, something that is seldom found in a copy. The second is the absence of a line between the lip and the nose, exactly as in the Mona Lisa, also circa 1500. Later, the catchy title the Male Mona Lisa is adopted to promote the painting, particular at the 2017 auction in New York.

There is still the sticky issue of provenance. Other than a mention that Leonardo had made a Salvator Mundi (two chalk drawings of parts of it are in Windsor), the best Hunter trio can provide are two possible entries in the inventory of art collector Charles I and a less descriptive one in the collection of Charles II, 1649.

When the 2011 Leonardo exhibition at the National Gallery is being put together, Parish/Simon and Adelson seize their chance to nudge the Sleeper into the Leonardo canon. The National Gallery Curator Luke Syson (2003 to 2012) invites four experts to view and comment candidly on the painting. University of Oxford Leonardo expert Martin Kemp utters the prophetic words: ‘Expectations are dangerous as you end up seeing what you want to see.’

Just what the consensus was remains vague. However, Syson calls Simon to report that everyone in the room agreed it was a Leonardo. Syson is aware that the painting’s inclusion as an autograph Leonardo would boost visitor numbers, add to the Gallery’s prestige and, of course, increase the painting’s value significantly.

In this version of The Emperor’s New Clothes, there are dodgy dealers, deferential experts, greedy auction houses, desperate arts institutions, cynical critics, FBI agents and then there is Yves Bouvier. Bouvier, a businessman with an encyclopaedic knowledge of the art market, extended his father’s shipping empire into the armoured warehouse business to meet the demand for artwork held in the tax haven that is the Geneva Freeport.

There are two Emperors in this 21st century fable. The first is Russian Oligarch Dmitry Rybolovlev whose billions are safer invested in art than in the bank. The second turns out to be Saudi Prince Mohammed bin Salman (MBS) intent on diversifying out of oil dependence with cultural tourism.

It just so happens that Bouvier is Rybolovlev’s art dealer and when Rybolovlev hears about the National Gallery’s attribution and then falls for the painting, he asks Bouvier to buy it. Bouvier cautions against the purchase, and not only on the grounds of a weak provenance. He writes to Rybolovlev: ‘It has been restored for five years – that’s a long time’; ‘Ms Modestini has a financial interest in the sale’; the [damaged and restored] face was quasi non-existent, and the original is just a tiny part of the painting;’ and the price is way too high.’

If possible, the plot thickens when Rybolovlev discovers that Bouvier has helped himself to a huge commission that has increased that price. This, and a disaster at Rybolovlev’s Russian mine prompt him to put the painting on the market just ahead of the Louvre’s big 500 Years of Leonardo blockbuster in 2019. Now, with even President Macron shown fraternizing with the new owner, will the Louvre bow to MBS to place the Salvator Mundi next to the Mona Lisa?