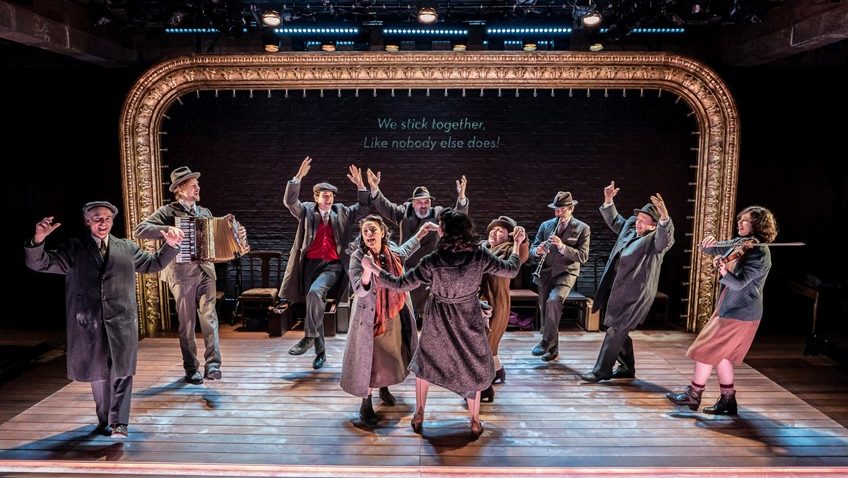 Paula Vogel’s Indecent tells the backstage story of a highly controversial Yiddish play, Sholem Asch’s God of Vengeance, from its first reading by a Yiddish troupe in Warsaw in 1907 to its American premiere on Broadway in 1923.

Asch’s play is about a respectable Jewish family who run a brothel. Their daughter falls in love with a prostitute. The first New York audience was deeply shocked by the lesbian relationship. It was the first time two women had kissed on the American stage. American Jews also found the play offensive and feared it would fuel anti-Semitic views.

The Broadway run was cut short when the cast, the producer and one of the theatre owners were all indicted and later convicted on a charge of obscenity. They were found guilty. The verdict, however, was overturned on appeal.

Vogel’s Indecent was performed off-Broadway in 2016 and on-Broadway in 2017. Rebecca Taichman won a Tony Award for best director and Taichman is directing the London cast. The Menier is the perfect venue for the play.

Finbar Lynch, who plays the stage manager, and Joseph Timms, who plays Sholem Asch, head a fine ensemble, which includes Peter Polycarpou. The performance, very Yiddish, is accompanied by a small live Klezmer band (accordion, violin, clarinet) and there are cabaret songs and stylized dancing.

Two key excerpts from God of Vengeance are performed. There’s melodrama when a father learns his daughter is having an affair with a woman and hurls a Torah scroll to the ground. There’s lyricism when the lesbians make love in the rain.

There is too little of Asch’s play to know whether it is any good and still viable. Some people may feel that the whole performance should have been acted in Yiddish by Yiddish actors; but that would only be possible, artistically, not commercially, if the play were part of an international season, like the World Theatre Seasons Peter Daubeny used to run at the Aldwych Theatre in the 1960s and 1970s.

Vogel’s final scene has the whole troupe back in World War II Warsaw in the 1940s, ghettoed and all wearing yellow stars. They are still acting God of Vengeance secretly and at great risk in an attic

Taichman’s production ends with a list of famous Broadway shows by Jewish writers being projected on to the back wall. It is a very long list and a reminder how much Broadway audiences have relied on Jewish writers for their entertainment.