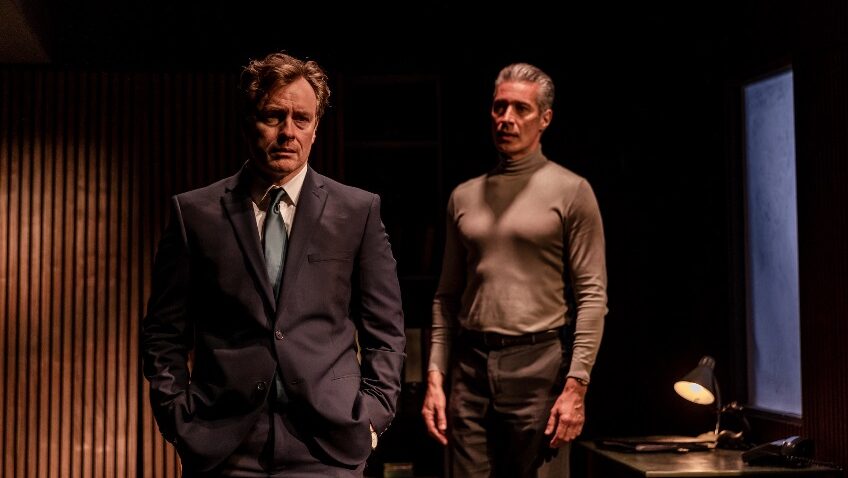 French playwright Florian Zeller’s latest play, translated by Christopher Hampton and directed by Jonathan Kent, has its premiere in London rather than in Paris. Zeller is the author of the multi-awarding winning The Father.

The Forest is wonderfully difficult to follow; more like a labyrinth, a maze than a forest; a sort of jigsaw, a fragmentary puzzle, a distorted murder thriller.

What is truth? Impossible to tell. It changes all the time. The kaleidoscope is constantly being shaken to produce new images and ideas. The story is told in a dizzying, circular, non-linear manner.

Perceptions constantly shift. The same actions are repeated several times with minute variations with different actors. It’s difficult to know whether somebody is dead or in Paris. There are enough bouquets of flowers on stage for a funeral.

The forest is a place where a man gets lost because he has followed his desires.

A middle-aged married surgeon has a mistress who threatens to tell his wife of their affair. His dealings with pharmaceutical companies may be criminal. The play is his nightmare, his guilty conscience. Living a life of fundamental duality, he disintegrates into dementia and becomes murderous.

The surgeon is played by two actors, Toby Stephens and Paul McGann. The women’s roles are not so detailed. Angel Coulby plays the persistent mistress, who is totally out of a control. Given that Gina McKee is cast as his wife, it is surprising how little she has to do or say.

There is a scene-stealing performance by Finbar Lynch, who plays a man in black, a deathly figure with white face and red lips, who can wipe a smile right off his face in an unnerving way.

The Forest has Florian Zeller’s unmistakable stamp. Theatregoers will be intrigued and mystified in equal measure and many will be unsatisfied.