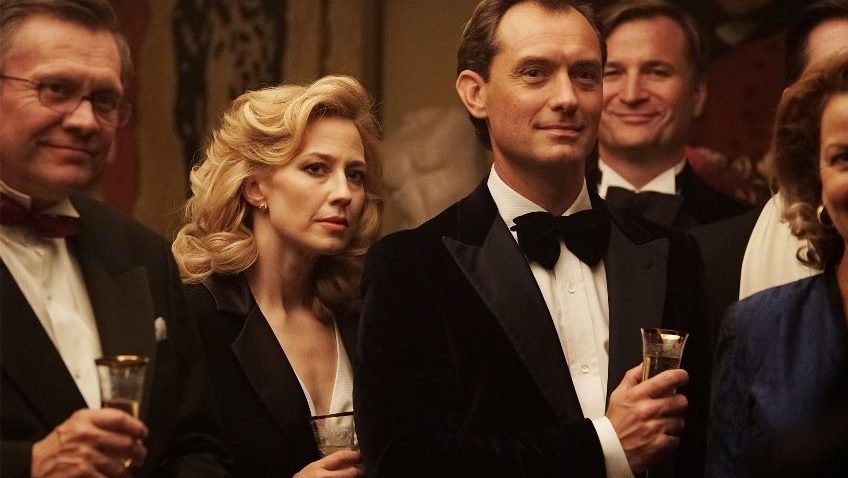 Jude Law and Carrie Coon deliver searing performances in a film that fails to match them.

Canadian writer-director-producer Sean Durkin’s second feature (Martha Marcy May Marlene) is a psychological thriller starring Jude Law in top form as 1980s’ former wunderkind City stockbroker Rory O’Hara. When we meet Rory, he is about to break the news to his wife, Allison (Carrie Coon) that their decade long sojourn in the States is coming to an end. He had relocated his family to America to follow the American dream, which the family appear to be living. But now, Rory announces with a hint of desperation in his tone, that “an opportunity” has arisen with his old boss, Arthur Davis (Michael Culkin, excellent) in London.

This review contains spoilers, although Durkin himself drops plenty of clues that much of Rory’s energy, confidence and imagination is funnelled into building a shaky façade. Right off the bat, for instance, after letting us know that it was Rory who called Arthur, Durkin slyly shoots their phone conversation through the glass window of the O’Hara’s expensive suburban home so that we do not hear it.

Rory, a charming, ambitious, middle-aged risk-taker is happily married to his lovely equestrian wife, whom he met (we learn halfway through the film) when she was a struggling single mother to Samantha “Sam” (Oona Roche), now a compassionate, capable and savvy, if typical teenager. The couple have an adorable son, Benjamin (Charlie Shotwell).

Allison does not share Rory’s enthusiasm about the move, complaining (another of Durkin’s alerts) that it’s their fourth move in ten years. The kids are finally settled in school, while Allison is happy caring for horses and giving lessons. Rory promises Allison that she will have her own stable in England and she can bring over her beloved thoroughbred Richmond. If doubts linger, Rory’s assurances and a night of sex later, seems to have settled the matter.

Allison confides in her mother who tells her, ‘It’s not your job to worry. Leave that to your husband.’ But it’s clear that Allison is already worrying and stashing away her private earnings. This seems old fashioned even for the 1980s, but Rory does come across as the type of guy who lands on his feet and has things under control.

Their cavernous, stately home in the commuter belt of Surrey, England is not only too big for the family and impossible to furnish, but spooky. Durkin plays with this discomfort but staging some supernatural interventions, such as the door Allison is sure she had locked swinging open and shut. She blames the children, and everyone feels badly. The kids have their own concerns. Sam is in a state school trying to fit in with the fast crowd and Ben is in an expensive private school where he is bullied, and one day retaliates by punching another pupil.

Predictably, things go downhill rapidly when Rory is frustrated at the lack of high stakes-high bonus opportunities. Allison’s beloved horse starts acting strangely and the failure of one of Rory’s ill thought-out business ventures leaves him isolated from his only friend and asking Allison – who has taken a job at a local farm – to loan him some cash. Allison, it seems, has retained her doubts and has been stashing her money for the sake of the children.

Whether to bolster his wounded ego or in search of redemption, Rory goes back to visit his estranged mother in the working-class neighbourhood he always resented. Rory brags about his trophy wife, his son and his wealth but his mother is not impressed, and the meeting is strained.

While it’s always great to see Anne Reid, the hackneyed psychology behind her scene with Rory feels like a cliché you could have written yourself. Whether it is really necessary to complete the portrait of Rory (isn’t it obvious that insecurity from childhood is partly responsible for his insatiable ladder climbing?), is doubtful. Nor does the scene work to expose his vulnerability: that happens in the denouement.

Equally problematic are the supernatural scenes that appear as after-thoughts as though from an earlier draft of the script. It’s as if Durkin had intended to use these to express his characters’ anxieties, and then opted for a climactic quartet of dramatic scenes that reunite the four members of the broken family.

As with Durkin’s chilling study of a disturbed mind, Martha Marcy May Marlene, The Nest suffers from a remote, one-dimensional central character, particularly when the film seems undecided about who the central character is. Is it really Rory or is it his long-suffering wife whose journey from trust to annoyance, to doubt, to suspicion, to anger and then to independence seems to dominate the film? With Carrie Coon’s spirited performance, you might start wondering how the marriage had lasted ten years.

If shown in a triple-bill between Wall Street and Falling Down (both starring Michael Douglas) The Nest would capture the missing stage in the high stakes, highly leveraged world of the 1980s and 1990s when it all came falling down. Here, in the post Trumpian era of Black Lives Matter, the #Me Too movement, and Covid-19 it is a film that, despite excellent performances from the entire cast, struggles to register as social commentary or suspense.