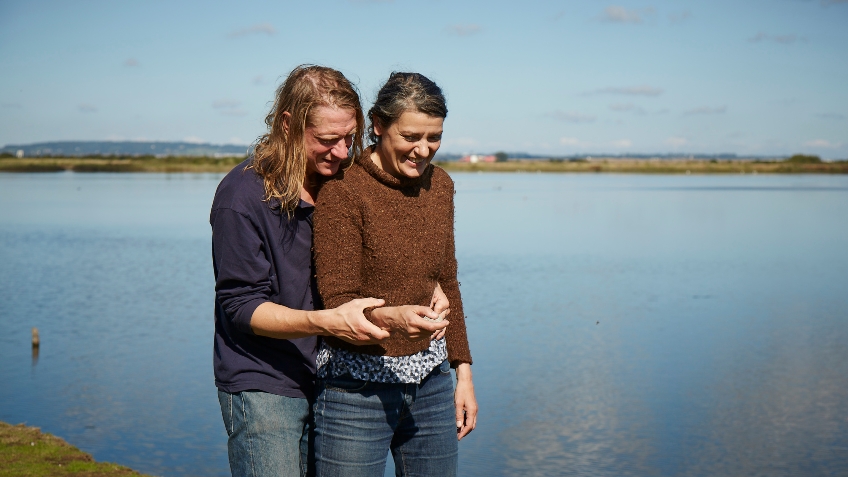 Andy Kelleher’s mesmerising directorial feature debut centres around a character we have never seen before in film, and whom it is not always easy to like, admire or forget. Everyone changes as they progress through life, but archaeologist Kathy’s (Cathy Naden) life is gradually altered by an incurable, degenerative form of dementia that leaves her cognitively aware of her transformation but helpless to do anything about it. And for almost the entire first half of the film, her erratic, uninhabited and alienating behaviour is thought to be just that.

Second Spring is fiction, but in Naden’s magnetic, debut performance, the unpredictable and disquieting archaeologist Kathy becomes frighteningly real. Naden has the capacity to express raw emotions and actions that are so fresh and feel so unscripted that you sometimes feel you are watching a documentary.

Frontotemporal Degeneration (FTD), which commonly hits people under 60, can, we learn, be diagnosed and managed, but is incurable. Once Kathy realises why she forgot the term Disc-Fibula in a lecture on Kent’s Anglo-Saxon Alton Brooch, she is instinctively drawn to a new life – with a new mission.

Kathy and her architect husband Tim (Matthew Jure) live in London like roommates in an uncomfortably open marriage. Their striking house suits Tim, but Kathy has already outgrown its stylish clean lines.

To those around her, Kathy is also crossing social norms, forgetting children’s birthdays, eating first when she has been invited to dinner, and – in a scene that might freeze you in your seat – striking up an intimate relationship with an unsavoury stranger on a suburban walk.

Tim has a steady girlfriend and Kathy now has her sights on Nick (Jerry Killick), who lives alone with his dog on an old houseboat, wears his long, fair hair in a ponytail and works as a gardener at Kathy’s faculty. He cannot believe his luck when this attractive, though unkempt, academic comes onto him, and the relationship rapidly progresses to passionate sex. Kathy beams that he is her boyfriend, and she is his girlfriend.

But before long Nick becomes more alarmed than amused at her lack of inhibition and her self-assertive possessiveness worries the peripatetic bachelor. He need not worry. Just as Kathy has left Tim and their home in London behind, she is already in the process of shedding Nick like a once useful skin, after he introduces her to his childhood home (and Nick’s father who still lives there) on the Hoo Peninsula but refuses to put down roots there.

Kathy’s new object of desire is the forlorn beauty of the Kent estuary surrounded, like in Antonioni’s Red Desert, or Seurat’s The Bathers at Asnières, by industrial towers, isolated in the eerie windswept marshes. With Jonas Mortensen’s atmospheric cinematography (apparently using the last 16mm Fuji film stock in the UK), the Hoo Peninsula becomes a character in the story, one in need of Kathy’s protection.

The film’s subtle turning point comes when Kathy finds a rare flower in the rugged landscape on a walk with Nick. ‘This flower means more to the landscape than we ever will,’ she tells Nick. ‘Yeah’, he jokes, ‘until someone chops it down’. The film’s title comes from Albert Camus ‘Autumn is a second spring when every leaf is a flower.’ Kathy, pushed into the autumn of life prematurely, is aware that she has limited time left to make a difference. As do we all.

Martin Heron’s script adroitly presents the symptoms of FTD – a heightened sex drive, lack of empathy, craving for carbohydrates, irrationality – through Kathy’s actions and interactions and lets them drive the storyline even before, at Tim’s insistence, she is diagnosed. This inspired approach creates a kind of suspense and involvement by ensuring that the viewer only knows what Kathy knows. We only learn about her illness as doctors explain it to Kathy, those closest to her – and to us.

Thanks to the script, direction, Peter Zummo’s fitting score, and Naden’s uncanny performance, while Kathy is difficult to warm to, you feel for her tragic vulnerability.