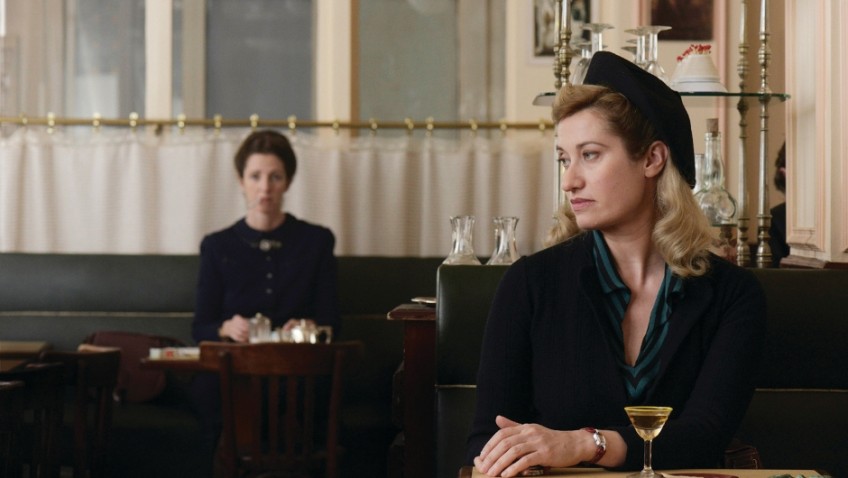 Like his celebrated film Séraphine, writer/director Martin Provost’s Violette  is another engrossing biopic of a little known French female artist of the 20th Century: the novelist Violette Leduc (1907-1972). Violette’s life – scandalous, lurid, touching and triumphant – was certainly more eventful than Séraphine’s; and her supporters, cited or portrayed in the film, read like a Who’s Who of post-war Paris’ Glitterati.

Ironically these factual riches present a problem for a filmmaker. It is difficult to dramatise hours spent writing books and there are a lot of biographical milestones to get through. Moreover, despite a astonishing performance from Emmanuelle Devos (in wig and false nose), who captures all the complexity of her character, it is hard to warm to Violette as a person.

Provost’s focuses Violette on her various key relationships by dividing the film into chapters, like a book.  Despite this structure, he focuses the film on Violette’s relationship with the famous writer Simone de Beauvoir, brilliantly portrayed by Sandrine Kiberlain.

Through Violette’s confessionary conversations and her books, we learn that she was born illegitimate. This status, and an unattractive face, haunted her throughout her life.  Through observation we might gather that her mother, Berthe (Catherine Hiegel), though well-meaning, was over-protective and mentally abusive, contributing to Violette’s low self-esteem.

The strength of Provost’s film is that he shows how this insecurity affects Violette’s relationships: her life becoming a painfully misguided search for love. She subconsciously alienates those who might befriend her and mistakes help for pity, which she rejects so vehemently that it becomes genuine pity. As a result, Violette spends most of her life in and out of stormy relationships and living alone.

Violette is needy, but often ungrateful or ungracious to those who help her. We see this in her relationships with Jacques Guerin (Olivier Gourmet), the wealthy perfume entrepreneur, who offers financial support; author Albert Camus, who publishes her first novel (L’Asphyxie/In the Prison of her Skin); and the notorious criminal turned superstar author Jean Genet (Jacques Bonnaffé) who offers her contacts and what little money he has.

Violette has little to give back except for the goods she reliably delivers in the form of ground-breaking feminist books.  Although Simone de Beauvoir becomes a loyal mentor, editor and financial supporter throughout Violette’s professional life, De Beauvoir keeps her distance and continually rejects Violette’s physical overtures.

The film begins in 1942 when Violette is living in the country with fraudster Maurice Sachs (Olivier Py), who is either dodging the draft or the Parisian artistic community that he had stolen from.  Violette acts like a spurned lover when Sachs, a homosexual, rejects her physical advances. But before he walks out on her (he was soon to die in a German concentration camp), Sachs sends Violette out to the apple orchard to write about her feelings and her life. She finds this outlet for her emotions painful, but it was an addictive therapy that became the subject of her novels.

In Paris, Violette is living independently in a flat on the proceeds of her black market activity.  While delivering black market goods to a friend of Maurice, Violette picks up a copy of De Beauvoir’s novel She Came to Stay. Stunned that a woman could have such a thick book published, and that the subject is a ménage à trois with two women, she devours the book.  Violette then begins stalking its author, working up the courage to request the meeting that changed her life.

If Séraphine spent the last years of her life in a lunatic asylum alone and unable to paint, thanks in part to De Beauvoir, Violette’s mental breakdown and hospitalisation were comfortable and short lived.  Moreover, Violette begins to enjoy financial success in 1964, beginning with the publication of La Bâtarde (the Bastard), which was publicly endorsed by De Beauvoir.

The film Séraphine sent viewers on pilgrimages to the village of Senlis and to the Maillol Museum’s exhibit of her amazing art. Violette is unlikely to have people booking a trip to Faucon, the Vauclusien village where Violette purchased a secluded house, but it will certainly create or renew an interest in her books.