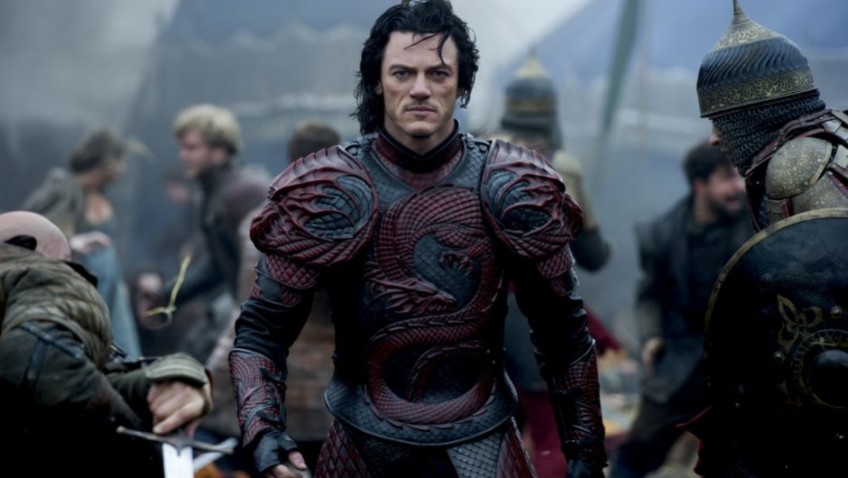 Dracula Untold aims to establish yet another vampire franchise with this feature-length pilot that explains the origin of the legendary Dracula the vampire. Before dismissing Dracula Untold as the preposterous supernatural fantasy it is, it is worth reminding ourselves, that there is serious historical and academic support behind a film that nonetheless takes itself far too seriously.

Vlad III Tepes (which means the Impaler), as he was called, wrote his name as Wladislaus Dragwlya, or Vlad Dracula.  When Vlad was born in Transylvania in 1431, his father was inducted into the Order of the Dragon, hence the ‘son of the dragon’ connection that script writers Matt Sazama and Burk Sharpless play with.   First-time feature Irish Director Gary Shore, and cinematographer John Schwartzman, do a good job creating an authentic- looking 15th century Romanian kingdom, but it is not a world that we haven’t seen before. The real problem, though, is that, spectacular battle scenes notwithstanding, Shore cannot do much with the clunky dialogue or the story’s limitations.

The film begins with the voice of Vlad’s son Ingeras (Art Parkinson) informing us, over impressively brutal visuals, that the Turkish Sultan had imprisoned Romanian boys and trained them to be warriors, one of whom became known as Vlad the Impaler.  Vlad, learn Turkish and grew up with the Sultan’s own son, Sultan Mehmed II (Dominic Cooper), who was always more of a rival than a friend. Eventually, Vlad III was allowed to return to Transylvania where he ruled in peace for ten years, though paying taxes to the Sultan.

It is at the end of the ten year rule when we meet up with Vlad (Welsh actor Luke Evans), now a revered Prince in his thirties, happily married to pale lovely, Mirena (Sarah Gadon, Maps to the Stars, Cosmopolis). Vlad and his faithful warrior friends are out and about when they find a Turkish scout helmet and become alarmed.  ‘Turks never travel alone,’ Vlad warns (he isn’t wrong) and sets out to find the troops.  He and two of his soldiers enter a cave full of crushed bones and skulls.  Within minutes, the two soldiers are killed by a creature they cannot see, but Vlad manages to escape

.The ten year peace ends when Sultan Mehmed demands, in addition to the usual monetary tribute, 1,000 boys over 15 to fight the Hungarian invaders plus Vlad’s own son (who is under 15).  Instead of handing over his son, Vlad slaughters the Turkish contingent and orders his castle to prepare for the inevitable consequences.

Remembering what a priest had told him about the monster in the cave (Charles Dance), Vlad returns there to conclude a kind of Faustian bargain with the monster. He is given superhuman powers by drinking the creature’s blood.  Vlad must finish off the Turks in 3 days and if he tastes any more blood, he will be transformed into a vampire for eternity. Will he be able to resist the temptation during a bloody battle? Will he be able to resist the milky white neck of his beautiful wife?

The charismatic Luke Evans might have started out in the West End as a singer/actor, but he is best known as an action/fantasy superhero/antihero, having played Aramis in The Three Musketeers (2011), Zeus in Immortals, and Apollo in Clash of the Titans as well as the bad guy in Fast and Furious 6.  He is so convincing as Vlad that we find ourselves actually willing him to resist taking a bite out of Mirena so that his family can live happily ever after.