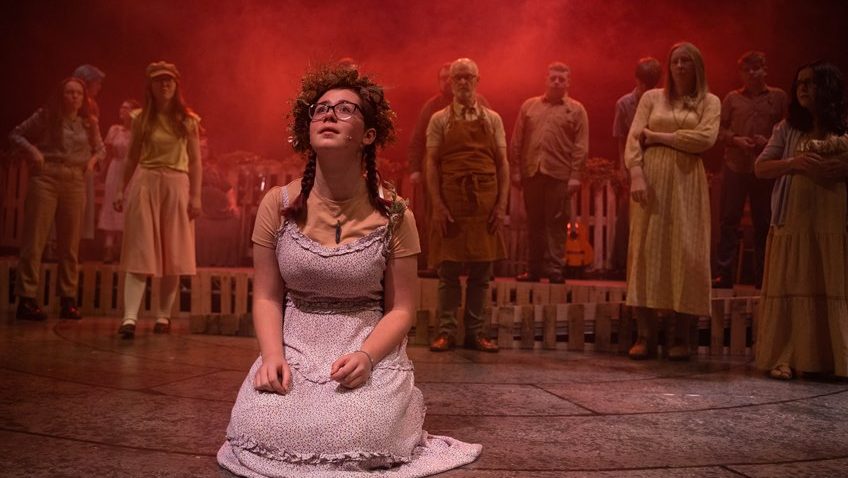 To create extraordinary acts of theatre and community is the National Theatre’s ambitious mission with its Public Arts project. In 2018, Public Arts brought Pericles to the Olivier Theatre; in 2019, it was As You Like It in Hornchurch; and in 2020 came … oh-oh, Covid-19 and hiccup, theatre closures. A planned, more northerly production of The Caucasian Chalk Circle, adapted by Chris Bush into The Doncastrian Chalk Circle went on hold, and there it remains, alas, until 2022. However… a show must go on! So, as Brecht waits intriguingly in the wings (stage left), the partnership’s online workshops and activities continued through lockdowns until live rehearsals arrived, finally culminating in a newly created live-on-stage production.

The Magic of Wild Heather takes a unique, highly enjoyable format, in which three acts of dramatised storytelling are interspersed with unrelated cabaret variety acts. The company’s members, all locally sourced, are international, intergenerational, inter-everything and into everything – acting, dancing, singing, narrating (and prompting) and generally getting the motley audience going. Throughout, the atmosphere is beautifully and subtly enhanced by the music and soundscapes of singer, composer, keyboard player Hayley Youell and guitarist Nick Lewis, by engaging strings of leafy vines that extend out over the intimate audience, by fiery lighting and smoke at the appropriate time, and by the wonderfully expressive signing that’s integrated into the entire show.

The different strands of the tale emerged from workshops and have been woven together by writer Jasmin Mandi-Ghomi into a story that shows the propensities of human nature for both good and bad, and the ability of the human spirit to find buds of hope even when all seems lost. Once a member of a community is labelled “different”, just like young Heather, silly rumours and unjust accusations can spread like wildfire and run out of control, courtesy of a baying mob. Hounded from her home, Heather experiences intense loneliness, and comes to realise that, even if eventually, unexpectedly, you’re accepted into a new community, you still always long for home. In the end, though, even if the home of the past no longer exists, hope for a flourishing future can still blossom if we work together to make the vibrant present count.

Acting as the show’s way-beyond-compare compere/commere and bringing narration and songs to boot, is local cabaret drag artist Bipolar Abdul, adorned with the lengthiest of lashes, a gorgeous, sparkly dress and a vast, widespread canopy of unruly red hair that puts even shock-haired Struwwelpeter in the shade. In between times, Alukazam (Luke) Robson, clad as a dark sorcerer, gets diffidently busy with trusty magic tricks: those metal rings that are impossible to interlock or free yet somehow do, those balls that appear, disappear or multiply beneath upended cups, then turn into fruit at the tap of a wand or the drop of a hat, that playing card that gets torn up only to find its way to the most impossible of places. Once the trick of polishing up panache is mastered there’ll be no stopping him! Ample applause for him, and also for rocky, funky, Afro-punky singer August Charles with Tom Woodhouse on guitar. His catchy Zambian chorus holds the Yorkshire audience in its happy, clapping sway, as does the Spanish
chorus of Comprare from singing guitarist Pablo de Jesus Rodriguez, who also treats ears to a burst of Rodrigo, and even gives onstage blacksmith Mike Baldwin a chance to show off his bongo.

A good time was, indeed, had by all with this uplifting amateur entertainment, sprinkled with professional sparkle.

Two shorter creative collaborations are: Stories To Get Us Through, available as a Podcast here and the musical film We Begin Again, created in partnership with The Guardian, available on YouTube.