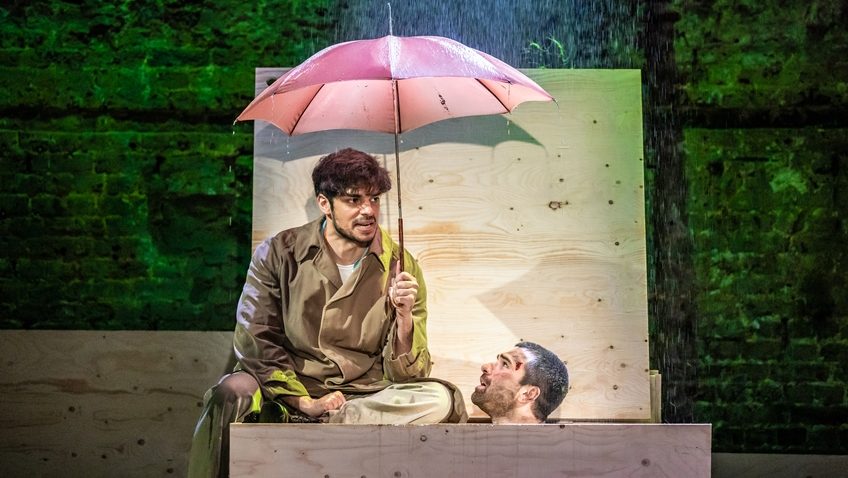 Robert Tanitch reviews Once Upon A Time In Nazi Occupied Tunisia at Almeida Theatre, London

Josh Azouz’s black comedy, Once Upon A Time In Nazi Occupied Tunisia, set during World War II, is not that funny. Jewish men between 17 and 50 were rounded up and forced to work in labour camps during the six-month occupation from November 1942 to May 1943.

Jews suffered in Tunisia in the same way Jews did in Occupied Europe. The play begins with one Jewish prisoner (Pierro Niel-Mee) being tortured. He is buried up to his neck in sand in the hot sun. He is so thirsty he asks his guard (Ethan Kai) to urinate in his mouth.

The guard, an Arab and his best friend, co-operates with the Nazis because he thinks in the long term the Nazis might give Tunisia, a French protectorate since 1881, its independence.

The Germans had hoped to create an army of Arab volunteer units fighting at the front in Tunisia but it failed to materialise.

Far and away the best scene, full of tension, is a confrontation between the Nazi commandant of the labour camp (Adrian Edmondson) and the Jewish prisoner’s wife (Yasmin Paige). It takes place over the dinner table in her home. The caricatured commandant, nicknamed Grandma, is at one at the same time a comic figure and not a comic figure.

He hopes to have sex with her. She intends to murder him and has prepared a delicious stew, which she peppers with some poisonous substance. She tells him she is not hungry. He says he won’t eat the stew unless she eats it, too. The scene is good old-fashioned melodrama. In fact, it is the only scene in Eleanor Rhode’s production which really holds the attention. Elsewhere there is too much that palls and bores.