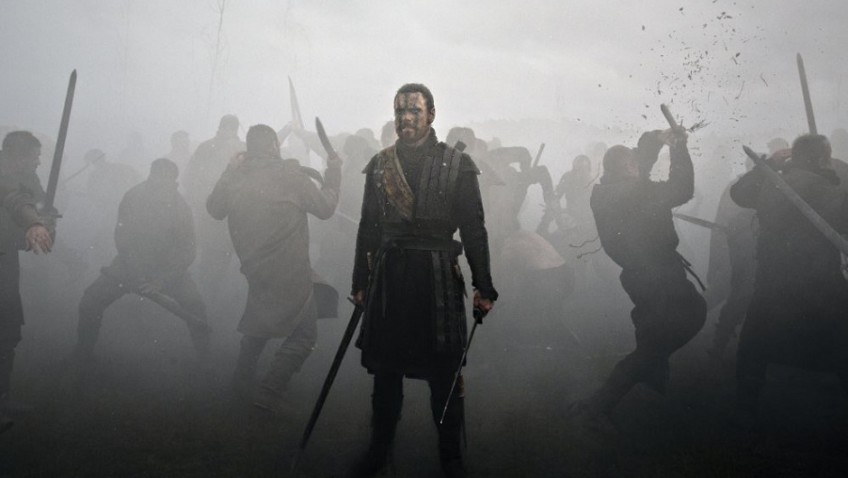 Fassbender, Cotillard and atmospheric filmmaking – but not much Shakespeare.

This Macbeth is designed to chill you to the bone with its realistic location filming (a soggy winter on the Isle of Skye; a foggy Bamburgh Castle in Northumberland), its bloody battles and close ups of its beautiful, award-winning stars: Michael Fassbender and Marion Cotillard.   But if Macbeth succeeds as a designer film about a serial killer, as an adaptation of Shakespeare’s great tragedy, it is wide of the mark.

Kurzel fixates on two latent aspects of the play that inform the film’s characters and help us understand their motivations.  Lady Macbeth (Cotillard) is obsessed with the loss of her first child.  As if to turn the knife in the wound, the film is full of images of children, right down to one of the witches (who are not witches, but scroungy, unhealthy looking peasant girls and women).  Children are, after all, heirs, and the Macbeths feel robbed of their heir – and their crown.

Macbeth (Fassbender), meanwhile, is correctly portrayed as a warrior returning from a long, bloody campaign with the title Thane of Cawdor (as predicted by the ‘witches’) and a heavy case of post-traumatic stress disorder.  Since ‘home’ is a grouping of huts on a kind of basic farm, it is little wonder the Macbeths would covet the King’s roomy, luxurious castle.

So far, so good, but the dialogue between the Macbeths as well as the famous soliloquies are curiously mumbled in a throaty whisper, distracting us from the enjoyment of the rich, significant language and making it a strain to understand it. Some critics have excused this muffled delivery as contributing to the grainy atmosphere or as a stab at interior monologue, but the play’s brilliant soliloquies negate the need for interior monologue.

What is more problematic is that Kurzel has turned the story from a tragedy in the vein of Hamlet (who killed his uncle and perhaps his girlfriend) or Othello (who killed his wife), to a history play with a villain, like Richard III.

Shakespeare took great pains to show that Macbeth was not a villain, and to make his fall a credible tragic event capable of earning our sympathy. Since Macbeth, who commits regicide and orders the murder of children, is Shakespeare’s most problematic tragic hero, he had to use all of his skills as a mature dramatist to enable the audience to accept such a huge moral decline without losing their sympathy.

Shakespeare’s solution is ingenious, even 500 years on.  He distances Macbeth physically from the murders while book-ending the murders with soliloquies full of anguished soul-searching that make us feel his pain.

It is therefore essential that we hear every word and that the acting be heartfelt and convincing.  The soliloquy, ‘He’s here in double trust’ – the cons of murdering your king, house guest and kinsman King Duncan (well-played by the chameleon actor David Thewlis) – is so brilliantly constructed that it hints at Macbeth’s evil plans while at the same time conjuring up sympathy for the man even considering such plans.

Since the role of the soliloquy is to make the audience Macbeth’s (and Lady M’s) confessor and confidante, we feel closer to Macbeth than to characters such as Duncan and even Banquo (an excellent Paddy Considine) who are, intentionally, kept at a relative distance from us.   Quite apart from the mumbling and whispering, Fassbender’s Macbeth seems cold and remains hard to read.

Stage directions indicate that, outside of general battle, we never see Macbeth kill anyone.  The murder of King Duncan is committed off stage, while assassins and mercenaries are hired to kill Banquo and Lady Macduff (Elizabeth Debicki) and her children respectively.

Even in the final battle scene, where he dies an honourable death, Macbeth refuses to fight Macduff (Sean Harris, superb), saying ‘my soul is too much charg’d/With blood of thine already.’ When the doctor tells Macbeth that Lady M is dying from a sick conscience (‘This disease is beyond my practice’ and tells Macbeth, ‘Therein the patient/Must minister to himself’) it is Shakespeare’s way of reminding us that Macbeth’s suffering is very real.

Kurzel ignores Shakespeare’s strategy and revels in implicating Macbeth with the murders, making this Macbeth the bloodiest and most fatalistic on record.  Kurzel even adds a creative touch – Macbeth actually looking on at what could be Macduff’s family burning at the stake like witches. He also downplays the ruthlessly manipulative Lady Macbeth’s contribution to Macbeth’s tragic flaw of ambition, turning her into a teary-eyed victim of sorts.  In making Macbeth a force of evil the film loses its tragic hero, and hence, a three-dimensional protagonist whom we care about.