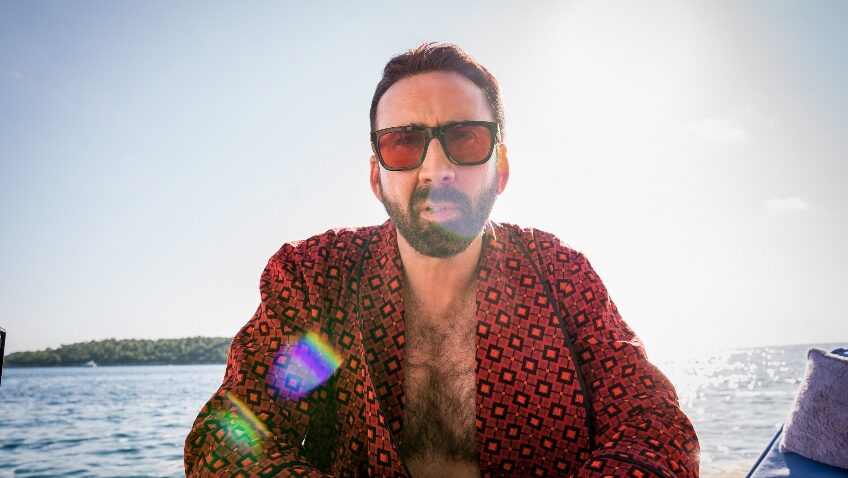 Nicolas Cage and Pedro Pascal ensure this zany meta spoof is a lot of fun.

If you missed this clever and entertaining film in the cinemas, there are some good reasons, beyond the assets attached to it, to own the DVD. Nicolas Cage not only plays a fictionalised version of himself but also a younger one as well – Nicolas Kim Coppola or Nicky, his invisible ego-bolstering doppelgänger. No one can spoof Nicolas Cage better than himself and director and co-writer (with Kevin Etten) Tom Gormican cannot avoid spoofing Cage’s rightful home, Hollywood either. If The Unbearable Weight of Massive Talent has a longer shelf-life than a spoof, it’s because Gormican has a lot of fun busting Cage’s oversized ego behind the scenes, while creating the very star powered vehicle his character is chasing with an exotic thriller and winning buddy movie.

The prologue is a case in point. Maria (Katrin Vankova), the soon-to-be-kidnapped daughter of a Catalan politician running on an anti-crime platform, is at home with her boyfriend watching Con Air after ordering a take-away. ‘This guy is incredible’, Maria swoons as the long-haired, grungy prisoner-turned-hero hands his wary little daughter a teddy bear. ‘A living legend,’ her boyfriend says – his last words before opening the door to the kidnappers.

Back in Los Angeles, however, Cage feels more like a dying than a living legend. Chasing what he considers will be the role of a lifetime, he ambushes the director for whom he has worked before, insisting on performing a “reading” although both acknowledge it’s something that “stars” never do.

Bad idea. For Cage is using his trademark form of method acting known as “Nouveau Shamanic” which Cage claimed is inspired by parallels between writings on the ancient shamans and thesbians. Examples of Cage’s flamboyant style can be seen in Lord of War, Rage, The Wicker Man, Gone in 60 Seconds, and Kick-Ass although that very style, if harnessed by a good director, is what makes Mandy and Bad Lieutenant so viscerally convincing. That the embarrassed director is played by David Gordon Green, who directed Cage in Joe back in 2013, is an example of how Gormican sustains the “behind the scenes” semblance to this zany tale of a movie star’s crisis of faith.

A visit to a therapist shows that Cage is in denial when it comes to the effect of his work-obsessed life on his sixteen-year-old daughter Addy (Lily Mo Sheen) and on his now ex-wife Olivia (Sharon Horgan). Unlike the version of himself played by the Belgium actor Jean-Claude Van Damme in his spoof, meta comedy JCVD, Cage is not short of work, but is being passed up for the roles he wants. We then hear Addy complain that his career is all her father ever talked about, and she endured in silence the ritual of watching old movies with him.

After a chance to redeem himself goes badly wrong at Addy’s birthday party and his failure to get the job, Cage decides to retire. His agent (Neil Patrick Harris) has a better idea, particularly as Cage needs a million dollars – and we need to know how mega fan Maria will be connected to Nicolas Cage’s existential identity crisis.

All Cage has to do is fly first class, all expenses paid to Majorca (the film was shot in Croatia) as the guest of honour at the birthday party of billionaire playboy Javi Gutierrez (Pedro Pascal, Wonder Woman 1984). If Maria is attracted to Cage, Javi is smitten. He is also a film buff and annoys Cage (eyes rolling up to heaven), who gets this all the time, with ideas for a film collaboration, based on a script he wrote.

Just when Cage is fast regretting his vacation in paradise, Javi takes Cage “sightseeing”, complete with a drug trip and more fun that Cage can remember. But where the two really bond is over their shared love of the films including The Cabinet of Dr. Caligari and Paddington 2, which Cage had never seen, but quickly embraces.

What elevates this bromance above the run-of-the-mill, is the incredible chemistry between the two actors and the genuine humour in their drug fueled escapades that invites the audience to partake in the fun. A hilarious sequence in which the paranoid friends are convinced that two men talking on a bench are after them, leads to splendid physical comedy around a crumbled wall.

But the paranoid has a basis in reality. Cage himself is whisked away by CIA agents Martin Etten (like the co-writer), played by Ike Barinholtz and Vivian (Tiffany Haddish). They suspect that Javi is the ringleader of an illegal arms dealing cartel and that his gang, who are naturally against her anti-corruption candidate father, hope that the kidnapping will force her father to drop out. Meanwhile, Javi invites Olivia and Addy to the island to reconcile them just when Javi’s ruthless cousin, armed with proof that Cage is a CIA agent, forces Javi to bump him off.

As the title suggests, the film is a self-referential spoof on Cage and the Hollywood film industry in which he has played a larger-than-life role – until The Unbearable Weight of Massive Talent tries to cut him down to size. But since Cage really is a massive talent, there’s more going on than spoofing.

You don’t have to be a Nicholas Cage fan to enjoy the film, but think back over his prolific and varied career and how can anyone not be a fan, or at least, appreciate his talent? Though Cage is a nephew of Francis Ford Coppola, he had to earn his role in Rumblefish and Peggy Sue Got Married and even changed his name to avoid nepotism. He certainly earned his Oscar for Leaving Las Vegas and the praise for Moonstruck and Bad Lieutenant: Port of Call New Orleans, Werner Herzog’s extraordinary adaptation of Abel Ferrara’s 1992 film.

There is little trace of over acting in Spike Jonze’s Adaptation, another meta film in which Cage plays both the real screenplay writer, Charlie Kaufman, and his brother Donald, as Charlie tries to battle writer’s block to adapt a fictitious book. We can think of “Nicky” here as being the equivalent of Donald Kaufman in Adaptation, but Nicky seems more of an afterthought in The Unbearable Weight of Massive Talent, and he disappears and with Pedro Pascal’s terrific performance as Cage’s new fan, friend, and collaborator, he is not missed.