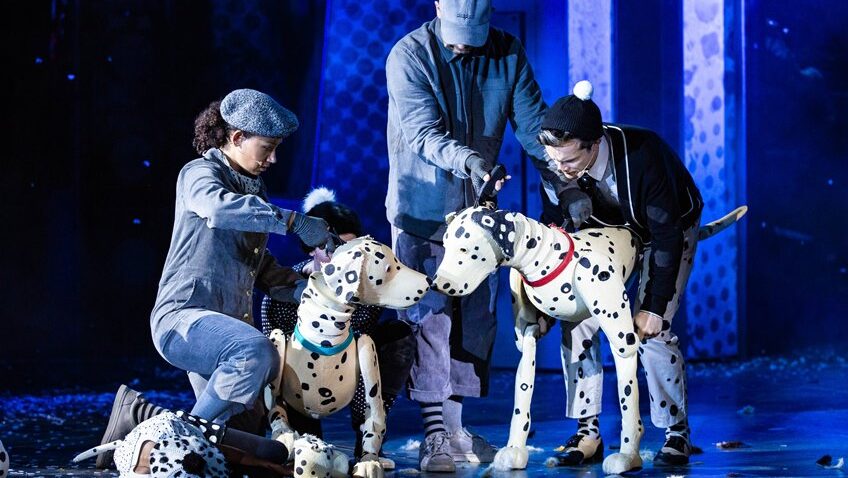 Postponed twice because of Covod, this new musical version of Dodie Smith’s children’s classic finally arrives, very appropriately, at this particular theatre. Did you know that the dog-owners in the novel in 1956 actually lived in a house in the Outer Circle of Regent’s Park?

The music and lyrics are by actor Douglas Hodge. The book is by Johnny McKnight based on a play by Zinnie Harris. Many in the audience (and not just children) arrive, dressed in white clothes with black spots, to identify themselves with the dalmatians.

It is, admittedly, a hard act for any adaptation of 101 Dalmatians to follow the immensely popular Walt Disney 1961 blockbuster, which was so elegant in its animation, so pretty in its pastel colours, so witty in its parody of British wartime films.

Cruella de Vil is one of the great villains in fiction. It’s a hard act to follow Glen Close’s flamboyant performance. She was superbly dressed and coiffed in the 1991 action movie. Remember her laugh?

Cruella is now a social media influencer. Kate Fleetwood is given a magnificent fur coat with a very long train and a big number to belt out.

Timothy Sheader’s production is noisy, black and ugly to look at. It does not have the doggy charm of the original. The storyline is unemotionally involving. The music is not memorable. The updating is unnecessary.

The production is puppet led. Toby Olié is the puppet designer and director. Pongo and Perdi, the two leading dog roles, have two actors for each role: one for head, torso and paws; the other for voice and hind legs. Danny Collins has a strong presence as Pongo.

For some adult audiences, the positioning between man and dog, may look, er, um, quite unintentionally, of course, a bit (how can I put it?) on the bestial side. But then that’s grownups for you; young children, you hope, will be quite oblivious.

The puppies, all 99 of them, are just heads without bodies. A car makes an amusing spectacle of itself when it breaks up before our very eyes and its bits and pieces are carried off by the actors.

The performance, which the audience audibly loved most, was a very brief appearance by a real dog, a tiny puppy dalmatian.