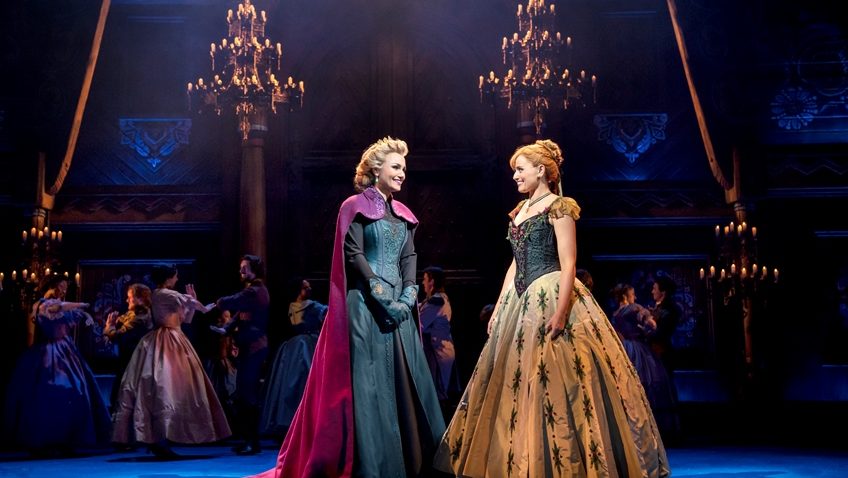 London’s oldest theatre has had a £60 million refurbishment and been restored to its 1812 glory. It reopens with Frozen, the stage version of Walt Disney’s highest-grossing animated film of all time, the perfect show for little girls, many of whom come, dressed like the heroine, in blue. Michael Grandage’s production premiered in Denver in 2017 and opened in New York in 2018. It would have been seen sooner in London had it not been for Covid.

Frozen has two female leads, Anna and Elsa, who are sisters, two princesses in search of love. Elsa (Samantha Barks) is the snow queen frightened by her power to turn everything to ice and eternal winter.

Anna (Stephanie McKeon) meets Prince Hans (Oliver Ormson), falls in love and wants to marry him immediately. Little girls have to learn the hard way that this is not a good idea. The prince proves less than charming.

Frozen relies on spectacle and the spectacle is spectacular. Christopher Oram is the scenic and costume designer. Neil Austin is the lighting designer. The high spot is the song, Let It Go, sung by Samantha Barks, at the end of the first act when everything round her turns to ice, including a huge bridge which stretches right across the stage.

The most magical (sic) moment is when the costume she is wearing instantly changes into another costume, the quickest quick change I have seen since David and Dania on America’s Got Talent.

Sven, the reindeer, and Olaf, the snowman, who longs for summer, are greeted with cheers on their first entrance. Ashley Birchall is totally invisible inside the reindeer’s body. Craig Gallivan is totally visible in the Bunraku Japanese puppet manner. The puppet is nearly as big as Gallivan, who is, as he should be, completely upstaged by Olaf.

The book is by Jennifer Lee. The music and lyrics are by husband-and-wife Kristen Anderson-Lopez and Robert Lopez. The film had 8 songs. The musical has 20. Apart from Let It Go, there is a good opening number, Let the Sun Shine On, an amusing duet for Anna and Hans, Love is an Open Door, and a pastiche Broadway show-stopper, which is funny because it is so ridiculously silly and incongruous.

I can say, without any fear of contradiction, that all those little girls, who see Frozen, will be begging their parents to take them to see it again and again.