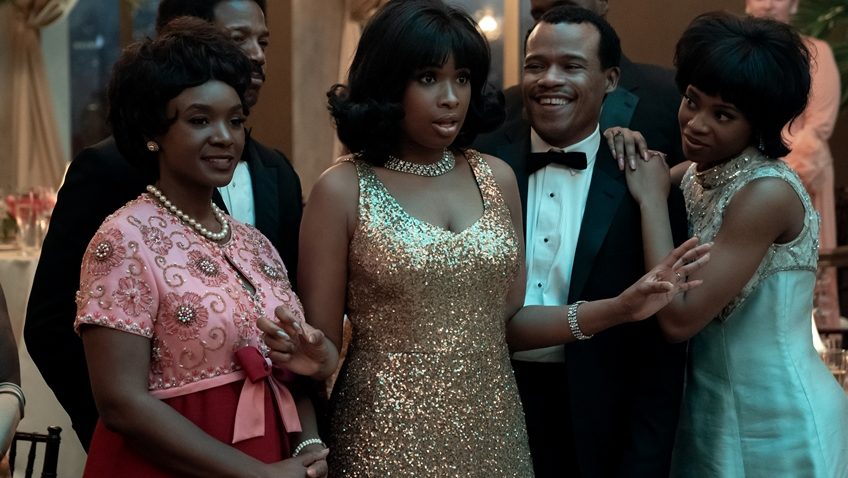 Jennifer Hudson is perfect casting in a familiar biopic with a few terrific scenes.

Jennifer Hudson was the late Aretha Franklin’s first choice to play the Queen of Soul in Liesl Tommy’s (director) and Tracey Scott Wilson’s (writer) bio-pic Respect and who could argue? Not only can Hudson belt out a song like Franklin, but she is also – and this is a rare combination – an Oscar winning (Dreamgirls) actress who at times is a dead ringer for the real thing. But the perfect casting goes further. Both women recorded R & B and Soul music on no fewer than four record labels; both were intrinsically involved in the Civil (and Women’s) Rights Movement; both sang at the White House; both divorced two husbands before they were 40, both struggled with weight gain and, crucially for Franklin’s story, both suffered severe trauma in their lives, albeit of a very different nature.

In 2008 Hudson’s mother, brother and young nephew were murdered by her ex-brother-in-law. When Aretha was 10 her mother – who was separated from her father – died at age 34 of a heart attack. Two years later she was raped in her home and gave birth to a son. There is adult trauma, too, but it is Franklin’s childhood trauma that leaves its mark on her life and perhaps leads to her abusive first marriage. Although Respect does not dwell on the traumatic aspects of Franklin’s childhood, (we see little Aretha’s “bump” fleetingly) the audience will feel unsettled when friends and family refer to Aretha’s “demons” as if she were psychotic.

Cradle to grave biopics are perilous undertakings for first time feature directors and writers for the obvious reason that capturing a life in just two hours means a lot of glossing over, superficiality, omissions and joining the dots. The successful Rocketman was directed by Dexter Fletcher; Coal Miner’s Daughter was directed by Michael Apted and Walk the Line by James Mangold.

Despite their enthusiasm and knowledge of Franklin’s life Tommy and Scott Wilson do not avoid the pitfalls of the genre. In their favour is Hudson, Franklin’s music and Franklin’s own story of personal and professional triumph over adversity. That’s already a lot, but alas not enough.

Aretha Franklin was born in Memphis in 1942 and brought up in Detroit by her father, the Baptist minister and singer Clarence LaVaughn (“C.L”) Franklin (Forest Whitaker). The filmmakers stress that when little Aretha’s relationship with her mother, Barbara (Audra McDonald) was cut short by her untimely death, the loss was the culmination of a relationship impoverished by separation. If anyone needed a loving mother-figure and balance to the overpowering C.L. it was Aretha. During one of Aretha’s visits to her mother in Buffalo, N.Y. Barbara tells her that ‘daddy’ can’t make her sing. ‘Daddy doesn’t own your voice; God does.’

Not mentioned in the film, Barbara apparently left C.L. due to his infidelities which, according to C.L.’s biographer Nick Salvatore, included fathering a daughter with a 12-year-old member of his congregation in his Memphis Baptist Church. Perhaps that is why, when Aretha herself is raped and gives birth at 12 to a son ironically named Clarence, C.L. does not give his daughter counselling or keep her away from the suspected father, with whom she allegedly has a second child, at age 14 named Edward (named after the suspected father).

Occasionally when Aretha is not touring, we see children hovering in the background, but we struggle to figure out who they are.

The same year as her rape, 1954, C.L. starts touring the gospel circuit with Aretha (Skye Dakota Turner, excellent) ultimately taking her out of High School. The performing bug hit even closer to home when, as the film shows in a chilling opening scene, C.L. drags his ten-year-old daughter from her bed to entertain his Saturday night party guests. Her transformation from sleepy ten-year-old to a performer basking in the smiles and applause is astonishing. The appreciative audience includes Clara Ward (Heather Headley), with whom C.L. was having a long-term affair and who was a kind of mentor to Aretha; singer Jackie Wilson; singer/songwriter/record label owner Sam Cooke (Kelvin Hair) and Martin Luther King, among many other luminaries who would influence Aretha’s life.

Alas, with the exception of King Jr (whom Aretha accompanied on civil rights marches, singing to attract bigger crowds), the only other influencers allotted a dramatic scene with Aretha are Cleveland (Tituss Burgess) and Dinah Washington (Mary J Blige) who exclaims: ‘Girl, you’re all over the place. You got to get rid of that God stuff,’ asking Aretha what she wants to sing. Aretha answers, ‘I don’t know.’

The filmmakers try to turn the film into Aretha’s search for a musical identity, but don’t succeed, for although the film is entitled Respect after her iconic pop protest song, and includes performances of her soul, jazz, R & B and pop music, it ends, fittingly with the live recording of Amazing Grace, the best-selling Gospel record of all time. Cleveland, the first Gospel musician to earn a star on the Hollywood Walk of Fame, had a more fundamental influence than anyone but her father, and was the force behind the recording of Amazing Grace (the subject of the fabulous documentary Amazing Grace that was only released in 2019).

The rest is connecting dots. We rush through Aretha’s stressful relationship with her controlling manager when they turn to Columbia Record’s John Hammond (Tate Donovan) to make her a star. Then we jump to Aretha’s abusive relationship with her first husband Ted White (Marlon Waylans) who in a rift with C.L. transfers her to the equally legendary record producer Jerry Wexler (Marc Maron) at Atlantic. Although Wexler is credited with turning her career around, his accomplishments are undeveloped. That said, in one of the film’s most enlightening scenes, Wexler takes the reluctant couple to Alabama to record (with a largely white band) at the recently launched Muscle Shoals Sound Studios. Here, we see Aretha using her musical skills to take charge of the direction of her music. We jump to her supportive second husband trying to hold Aretha’s alcohol dependent life together when, “her demons” possess her. Aretha’s relationship with her talented older sisters (who both died young from cancer), and sometime backup singers is sketchy and underdeveloped.

So ultimately, Respect ends up feeling like two other recently released biopics of female performers with abusive relationships and signature songs: I Am Woman (Helen Reddy’s story with the song of the same title) and The United States vs Billie Holiday (Strange Fruit). Like Franklin, Both Reddy and Holiday were, despite or because of their abusive relationships, feminist icons who did it their way. And they had a much harder time of it than Frank Sinatra.