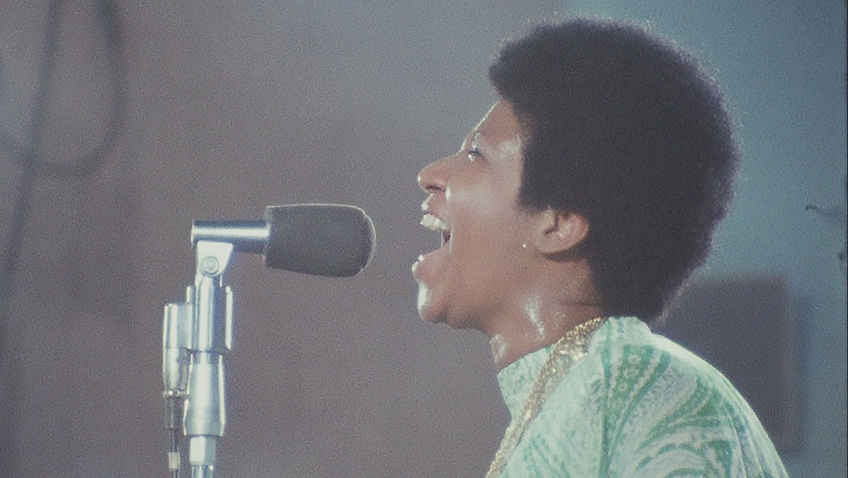 This film should come with a warning: see Amazing Grace in a cinema where you can dance in the aisles because when the first members of Reverend James Cleveland’s congregation jump out of their seats, you’ll want to join them. And here is a piece of advice: bring a hankie. When Aretha Franklin sings the title song, the first tear shed rolls down the cheek of a choir singer listening in awe with rapt attention. The next to go is the corpulent James Cleveland who is too busy wiping his tears to continue playing the piano. After the choir conductor succumbs, so does Franklin herself, consumed by the power of her own voice, and, no doubt the memories, bad and good, the song invites. 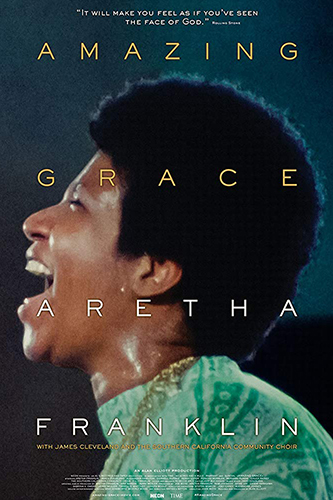 Directed by the Sydney Pollack, who had just finished They Shoot Horses, Don’t They?, and was one of the classiest and most bankable directors in Hollywood, the film captures the live recording of Amazing Grace

, Aretha Franklin’s best-selling album. It lay in the Warner Brother vaults unseen for over 40 years, as due to human error, or technical malfunctioning, the music and images could not be synchronised. In 1990, with Warner Brothers’ and Pollack’s blessing, producer Alan Elliott began the long process of completing the film. Pollack, who died in 2008, never saw the finished product, but fortunately, you can.

and won the first two of her many Emmy awards. By 1971 she was not only known as the Queen of Soul but was keeping Atlantic Records at the top of the Pop and R & B charts with five years of hits. In the wake of the success of the soundtrack to the 1970 documentary Woodstock, Franklin and her producer, Jerry Wexler, proposed a joint film and album in which she returns to her childhood roots in American Gospel music.

The album was recorded live at the New Temple Missionary Baptist Church in Watts, Los Angeles (scene of the 1965 race riots) in 1972. It is the Church of the charismatic, musical Reverend James Cleveland, an old friend of Aretha’s father, C. L. Franklin, who was also a Baptist Minister, in Detroit.
Backed by Franklin’s regular band, when not at the piano (a position occupied by Cleveland except for her first song, On Our Way), Franklin is primarily positioned behind the pulpit with her back to the lively Southern California Community Choir and facing the packed congregation, but oddly, exhibiting little connection to either.

But that does not seem to bother anyone and Franklin, a consummate pro, aided by the choir’s hardworking conductor, somehow knows when to join in with the choir and when to go off on her own. You get the impression that improvisation is wired into her veins.

Things turn a bit surreal when you spot Mick Jagger and Charlie Watts (who were in the USA on a 1972 tour), clapping to the beat in the congregation and when we learn that the conductor’s name is Alexander Hamilton.

Even if Gospel isn’t your thing you will still be moved by Jesus Said You Can Lean on Me in a special arrangement with James Taylor’s hit, You’ve Got a Friend (Just call out my name…). There is a special significance to her song, Precious Lord Take My Hand, as this is the song she sang at her close friend Martin Luther King’s Funeral in 1968. 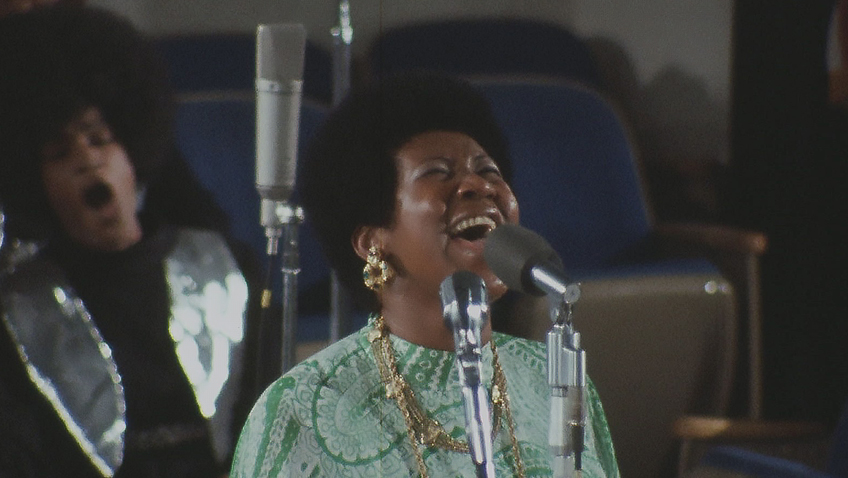 There is what could be interpreted as an uncomfortable moment when C. L. Franklin jumps up on the podium to pay tribute to his daughter. She smiles politely, but her reaction is hard to read. Is it embarrassment that she is being praised at the recording session and religious concert, or is it something deeper?

Reverend Franklin never seemed to respect the Commandment about not committing adultery and reportedly Aretha’s mother, a pianist, left when Aretha was 6 for that reason. Her father then took Aretha on the road with him from the age of 11 (she only completed a year of High School) and managed her career in Gospel music until she was 18 and went into secular music, signing with Columbia Records.

But Franklin seems to have a great relationship with James Cleveland and she talks of all the talented musicians who visited their Detroit home and inspired her in her career. In a touching moment, she pays tribute to Gospel legend of the 1940s and ‘50’s, Clara Ward who was in the congregation.

Although Franklin’s two marriages were short lived, her career was long and successful. In 2010, eight years before her death, Rolling Stone Magazine rated her number 9 on their list of the 100 Greatest Artists of All Time. If you cannot see why from this documentary alone, you might when you consider that her Gospel music was not only a part of her incredible range, but fed into it.

The same singer who gave us I Never Loved a Man the Way I Love You and Natural Woman stood up at the 1998 Grammy Awards to sing Puccini’s “Nessun dorma” when Luciano Pavarotti was too ill to attend. And the same woman who just wanted a little ‘Respect’ and complained about her link to an abusive man in Chain of Fools sang My Country ‘Tis of Thee’ at Barack Obama’s inauguration. Aretha Franklin died last summer, and this is a fitting remembrance.