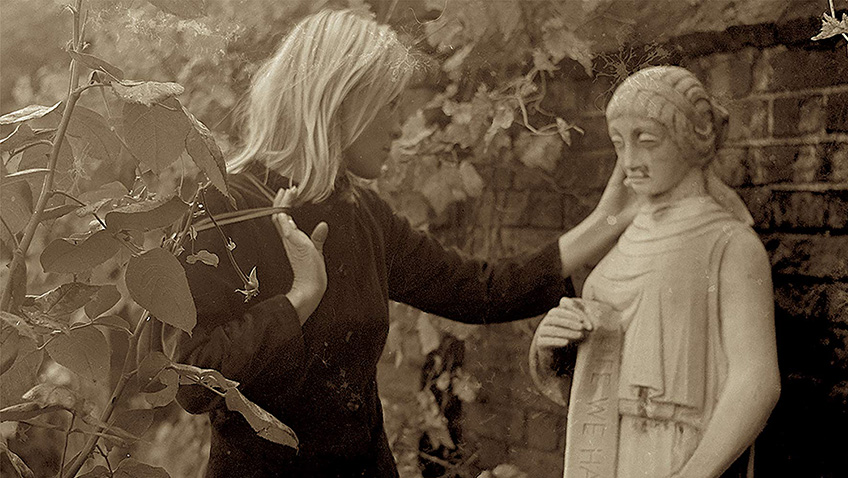 is not a cradle-to-grave documentary biopic like the recently released Pavarotti. It is a portrait of a love story as tragic in many ways as that between the poet Dante and his muse Beatrice, if considerably more reciprocal. The Leonard is, of course, Leonard Cohen and the Marianne, Marianne Ihlen, his ‘Greek muse’, who inspired the song, ‘That’s no way to say goodbye.’ And while watching this film, you might wonder whether English documentary filmmaker Nick Broomfield (Whitney: Can I Be Me, Battle for Haditha, Ghosts) was put on earth to make it and help Leonard Cohen fans to finally find a way to say goodbye.

The film is bookended by the death of Marianne, whose life and death were immortalised by Cohen’s words of love. The 82-year-old-singer/songwriter (then finishing his last album in a modest Los Angeles apartment) had been notified by Marianne’s close friend, Jan Christian Mollestad (one of the film’s producers), that she was dying of leukaemia. He sent a final (often misquoted) message to Norway:

“I’m just a little behind you, close enough to take your hand. This old body has given up, just as yours has too, and the eviction notice is on its way any day now. I’ve never forgotten your love and your beauty. But you know that. I don’t have to say any more. Safe travels old friend. See you down the road. Love and gratitude.”

The film also returns to an early glimpse of Cohen at the Isle of Wight Festival in 1970, where, looking spaced-out, he announces, ‘I wrote this song for Marianne. I hope she’s here. I hope she’s here.’ We later understand that at this concert, and it seems for most of the 60s and 70s, Cohen, who had stage-fright, was high on drugs.

Nick Broomfield was 20 in 1968 when he went to Hydra, a magical island in the Aegean Sea, in search of sun and adventure. This was just before Hydra became a haunt of the rich and famous, and the island had just received intermittent electricity, which is thought to be behind Cohen’s song, Bird on a Wire. There Broomfield met Marianne Ihlen, a beautiful Norwegian woman, whose grandmother had told her, ‘you are going to meet a man who speaks with a tongue of gold.’

That man, Marianne realised much later, was not the womanising Norwegian novelist Axel Jensen with whom Marianne had a child, Axel; but a stranger, framed in sunlight at the door of a café/grocery store, where she was shopping with her infant son. The stranger asked Marianne to join him and his friends at their table and, captivated by this warm, handsome, 25-year-old, she obliged. It was 1960 and Cohen was to spend the next eight years with Marianne on Hydra, but not all year.

It is not until later in the film, when Cohen introduces the song Marianne to the patients of a mental hospital that we learn that he spent less and less time in Hydra as the years, and his musical career progressed. We also learn that he spent six months of the year in Montreal, where he was born, with Suzanne, another, more aggressive, muse, who apparently knew how to capture the wild stud.

Marianne is described by all the film’s interviewees as a giving, nurturing and encouraging person. And just as she served as Cohen’s muse (cook and housekeeper), she encouraged Nick to become a documentary filmmaker and introduced him to Cohen’s songs. Cohen, like Nick had come to Hydra to escape the dreary winters of London, where the Canadian-born writer had been living.

Nick pops up in Marianne’s life throughout the film. ‘Marianne came to stay with me for a while in my Kentish Town (London) squat. She got me into the protest movement with Julie Felix’ (the American-born, British based folk singer), he says. Frequently these visits correspond to periods when Marianne was visiting Cohen, with lots of time alone, but also when she put Axel in an English boarding school.

The most promising invitation comes just after an elated Cohen was signed by Columbia Records. ‘Have house. All I need is my woman and her son.’ Marianne, who admits to being lonely on Hydra, jumps at the chance. According to Aviva Layton, (the former wife of the Jewish Canadian poet Irving Layton, who became a major influence on Cohen), this was a mistake. “He needed to say, ‘I need my woman’, but the minute he said it, he didn’t need her anymore.” Aviva, outspoken about Layton’s infidelities, is adamant that poets cannot be tied down and Cohen, as we see, was one of the most womanising and itinerant of them all.

Marianne was visiting Cohen when he was living at the famous Chelsea Hotel in Manhattan. He kept his music and personal life so separate that he did not invite her to attend a Janice Joplin concert. The reason can be found in the lyrics to his famous tribute to Joplin, ‘The Chelsea Hotel #2 that describe what was happening on the ‘unmade bed/While the Limousines wait in the street.’

This is not the definitive biopic of the man who Joni Mitchell, a former lover, called a ‘boudoir poet.’ Though Broomfield covers Cohen’s upper middle-class Jewish background in Westmount, Montreal; his first festival appearance singing Suzanne; his years as a Buddhist monk; the alleged ‘Hallelujah swindle, and the embezzlement that led to Cohen returning to the stage in his 70s, he focuses on the love story. This, the film shows, outlasted Hydra where, with Marianne supporting him, Cohen, sitting in the blazing sun, high on drugs, finished his novel, Beautiful Losers

. The scathing reviews resulted in Cohen having a breakdown and leaving Hydra to focus on music. We never learn how he learnt to write music, but we see that it was Judy Collins who, after hearing Suzanne, told the man who said, ‘I can’t sing and I can’t write songs,’ that he could do both.

Equally fascinating is the profile of Hydra itself and the dark spell which the celebrity island cast on those who struggled to survive in an idyllic paradise. The lovers drifted apart when Cohen pursued his career – and capitalised on his appeal to liberated women – but Cohen never lost contact with his muse, who inspired the songs, ‘Bird on a Wire;’ ‘Hey That’s No Way to Say Goodbye’ and ‘So Long Marianne’. Cohen’s message to Marianne when he learnt that she was dying went viral. But it is Broomfield’s film that shows us her reaction to his last words of love. Cohen, as he predicted in this message, was right behind and died 3 months and 9 days later.