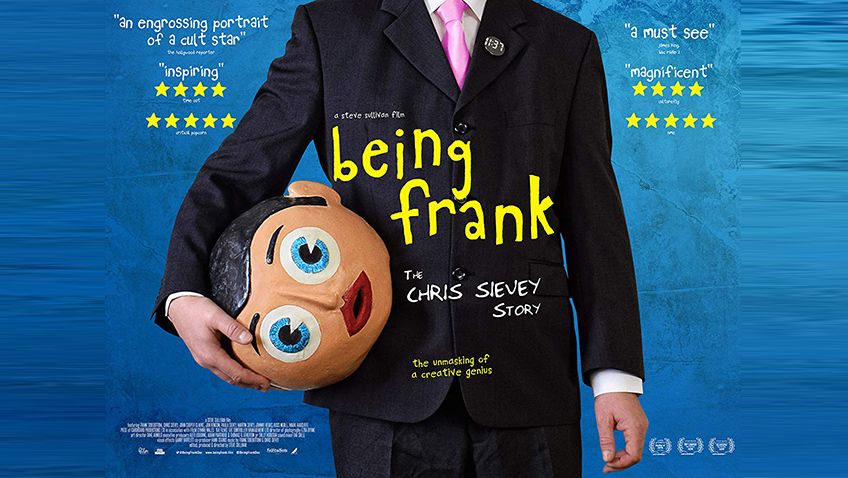 A terrifically entertaining biopic of a minor, cult entertainer

Who was Chris Sievey (1955-2010)? Even those who remember this minor cult personality from his regional television, radio and club appearances as a singer and comedian might struggle to provide a definitive answer. If you affix the name Frank Sidebottom, Sievey’s alter-ego, to Sievey’s, the recognition factor will grow exponentially, but will not address the central question. Those who have seen or heard Chris Sievey perform will, however, be in the best position to judge whether he was as funny and wacky as is writer/director Steve Sullivan’s affectionate but unsentimental biopic Being Frank: The Chris Sievey Story

Chris Sievey, born in Sale, Cheshire in 1955, close by the village of Timperley that he immortalised. But it is a statue of Frank Sidebottom that was erected in 2013 to commemorate the association. That Sievey was talented there can be no doubt. The exact nature of his talent is harder to pinpoint, but it was infused by a singular, tireless imagination that manifested itself in random, spontaneous and unfettered bursts of creativity without boundaries or labels. Dave Molyneux, a close friend, (who maintains that after they took LSD together, Chris was never the same again) notes, ‘his head must have been full of ideas of all the things he wanted to do.’ He was a composer, songwriter, and singer, a graphic artist, a ventriloquist, a comedian, a radio and TV host and guest, and even a video game designer.

Sievey’s brother Martin recalls that Chris was happy on his own, but there had to be an audience at the end.’ Sievey, it seems was a born entertainer, but also a frustrated one as that elusive hit song or hit TV show never materialised.

All his life Sievey was wild about the Beatles. As a boy, he kept an album with articles about the band, and anything else on the pages (an adjoining article on Stevie Wonder for instance), was crossed out with a big X so that no one would waste their time. This obsession took him and his brother, Martin, to Apple Records. Instead of meeting the Beatles or being signed on, the advice from Apple was to go home, get a band together and get a record contract.

They tried and failed. Eventually Martin and Chris went their separate ways. In a hilarious anecdote, Martin recalls how Chris kept a file of all their rejection letters. In one case, he supplied his own rejection letter, leaving a space for the executive in question to sign. We also see a Temporary Rejection Letter, informing Sievey that the permanent letter was in the post.

Sievey maintained that the rejection letters ‘spurred me on’, but he was unable to ride the crest of the Manchester Music scene of the late 1970s and 1980s with his band, The Freshies (former band members provide some humorous anecdotes) and their one chance for a hit was jinxed. The song, ‘I’m in Love with the Girl on the Manchester Virgin Megastore Check-Out Stand’ was catchy and novel enough to start climbing the charts.

But Sievey was forced to re-record the song, replacing the brand name ‘Virgin’, with ‘a certain’ and by the time the new version hit the BBC charts, a mechanics strike shut down the charts. When the strike was over, so was their glimpse at stardom. The song was apparently picked up by MCA and sold 40,000 copies but no one was offering the band an album deal.

Sievey was also a husband and loving father to three children. His long-suffering wife, Paula, who appears throughout the film, recounts that shortly after meeting, they went for a stroll along the canal and Sievey suddenly threw her in. Rather than ditching him, within a few days of meeting Chris, Paula accepted his marriage proposal and the two were married during their lunch break.

Sievey’s children appear in the film in photos, home movies and in person, with anecdotes. It must have been fun to have Chris Sievey as your father since he never really grew up. He remained as troubled as a teenager going through an identity crisis, a crisis that was to peak when he folded himself into Frank Sidebottom.

A year before director Lenny Abrahamson released the Academy Award nominated film Room (that saw Brie Larson, the current Captain Marvel, win the Best Actress Academy Award), Abrahamson directed a low budget film called Frank. Frank Sidebottom is played by Michael Fassbender wearing the paper-mâché head of Sievey’s alter-ego. In this bizarre, fictional feature, a music-crazy teenager goes off for what he imagines will be a few days to fill in for a musician in (a mainly silent and absent) Sidebottom’s band who has drowned. He is coerced into remaining isolated in a remote location until their demo album is completed.

After more than a decade of failure, Sievey had an epiphany. At a late Freshies’ performance, Sievey dawned a large paper-mâché sphere over his head, on which was painted a doll like face with shiny black hair, huge blue eyes and big red lips. The head-mask was a leftover from a Halloween party, but when Chris wore the head at the concert, he passed himself off as a fan of the band. The fan’s name was Frank Sidebottom and Sievey gave the talkative Frank a life all his own. He was eternally 35, but still living in Timperley with his mum, who was unaware of his fame. In another hilarious segment we meet Little Frank (Frank’s puppet) and Little Frank’s headless girlfriend, Denise. It is very funny, but when Sievey emerges from under the head, he looks exhausted, sweaty, and uncomfortable from a rubber nose-plug.

Frank’s TV career peaked in 1992 with the short lived children’s show, Frank Sidebottom’s Fantastic Shed Show, but his heavy work schedule (he did everything himself), coupled with his increasing dependency on alcohol and his childlike-aversion for things like paying bills and taxes, saw him lose his TV show, his family and his future. He disappeared in the 1990s, although he nearly made a comeback a few years before his death from cancer in 2010.

If there is something very sad about Sievey’s life, Being Frank: The Chris Sievey Story

is, a bit like Frank himself, a humorous and surreal façade that is terrifically entertaining. Sullivan never draws attention to the tragedy below the surface but we can never ignore it.