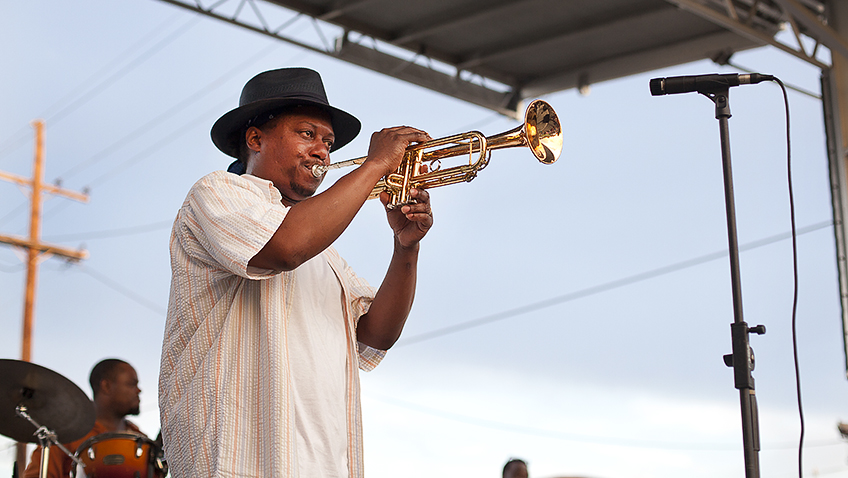 One Note at a Time might lack the grandeur, scope and artistry of Spike Lee’s 2006 documentary masterpiece, When the Levees Broke, but it is an interesting and eye-opening appendage to it and other, more timely films about the effects of Hurricane Katrina. And, like Lee’s 255 minute opus, this modest 95 minute documentary shot over 4 years is a labour of love for director/producer/editor/writer Renee Edwards. 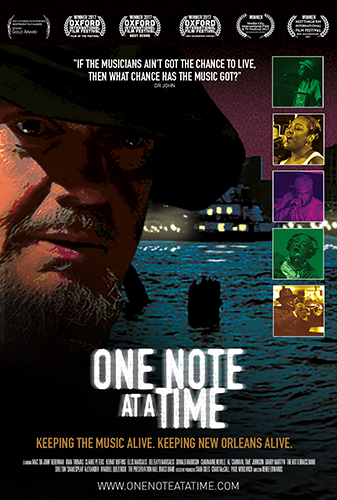 It is not surprising that in a city that is famous for its music Edwards provides a kind of survey of the city’s jazz, blues and brass bands scene, and of its individual musicians (living and dead – as several musicians died during the long production period). What is unusual is her emphasis on the health and well being of the musicians. Many of the city’s musicians are over 50 and whether they remained or left, many returned to New Orleans to find they had lost everything.

Ralph Gavin, a policeman and artist standing before his expressionistic painting of the city’s mayor with a headache, points out that ‘Katrina was not the problem: it was when the levees were defeated. It was a man-made incident.’ He goes on to tell us, ‘1800 people died that were documented and many more who have not been identified.’ Like Spike Lee, Edwards does not shy away from politics.

The late ‘Creole Beethoven’ – Wardell Quezergue – is on camera discussing the aftermath of Katrina in which he lost many of his music scores. Already legally blind by 2005 he had been helped by his musician sons, two of whom also lost music scores and equipment in the floods. Then he adds a comment that shocks us, but receives no clarification: ‘my oldest son had a whole of equipment – I think he passed away because of what he lost and I think my second son died the same way.’

Dr John (77-year-old Malcolm John Rebennack) describes the difficulty many older musicians had surviving in strange environments if they left the city and in picking up the pieces when they returned. A caption informs us that the city was slowly recovering thanks to the Musicians Clinic and Assistance Foundation, founded by Johann and President and Director, Bethany Bultman. The Bultmans become the intermittent narrators of the film and they are remarkable people. 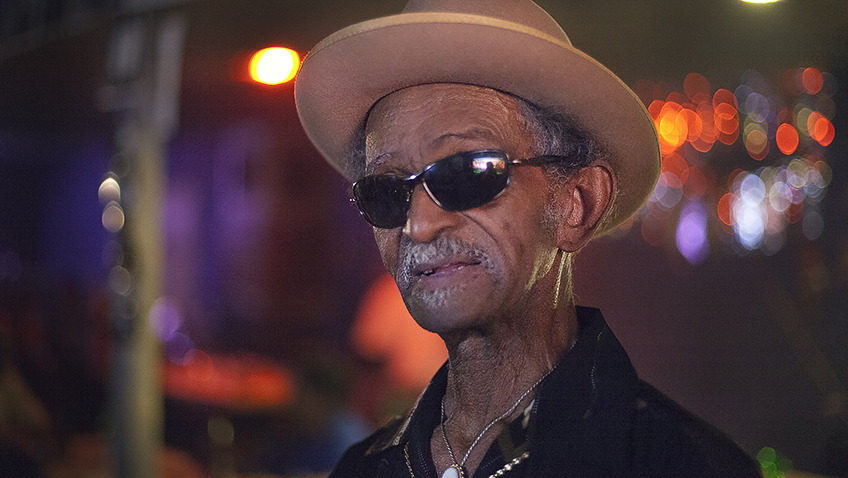 Lionel Batiste in One Note at a Time

In another caption we learn that most musicians are so poorly paid that they fall into the ‘sacrifice zone’, making too much money for Medicaid and too little for Obamacare. This is where the Bultmans step in to provide medical care for the city’s musicians that they otherwise could not afford. They have also involved hospitals and better funded clinics in their enterprise.

The Bultmans founded the clinic in 1998, but after Katrina obtained a three year Federal grant that is supplement by donations and fund raising. They use their own home for administration and fund raising events.

A succession of musicians tell us about their injuries (which range from the wide-ranging diabetes, to limb amputations and prosthetic legs). But many less obvious ailments could otherwise go unnoticed. A musician might think that his ‘difficulty playing the horn is due to a tooth abscess’, Bethany tells us, ‘but in the course of diagnosis we find that they have diabetes, asthma and many times hyper-tension.’

As well as hearing from ailing artists, we hear from one famous local with legal problems that affected his well-being. The singer/songwriter Al ‘Carnival Time’ Johnson fought a decade-long copyright battle for the right to the hit song that gave him his nickname. He tells us he was in court for 11 years, but ‘I came out victorious.’ 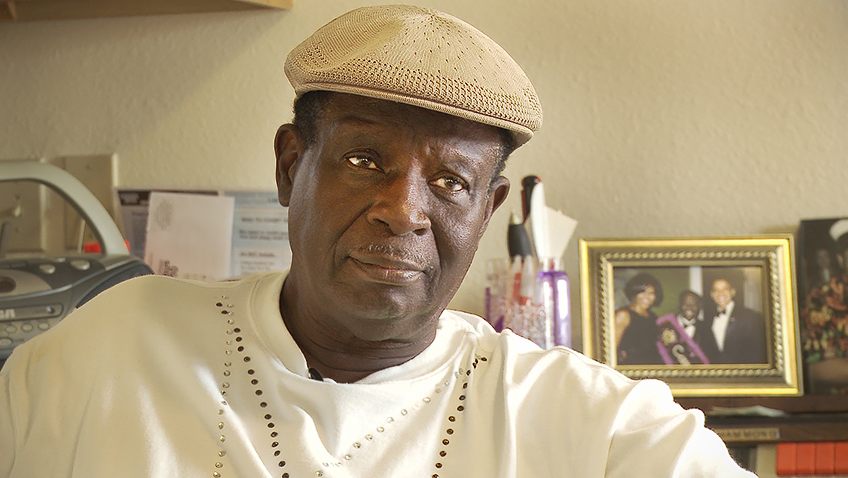 Al Johnson in One Note at a Time

The Bultmans believe that the health of the city musicians is important to the life blood of the city, not to mention its tourism and crime rate. Bethany does not glamorise New Orleans. It is ‘a very difficult city to live in with a lot of feral children, and a lot of violence… It is easier to get heroin and crack than a cheeseburger.’

She cites brass bands (because they are a group of men who travel the world peacefully and make a living from music) as a positive influence. We hear from Roy Lancaster, the spokesman for The Young Fellaz Brass Band who are cited as role models. Bethany adds, ‘they can go into schools and tell young people that they do not carry guns and are not in gangs, but they play music.’ 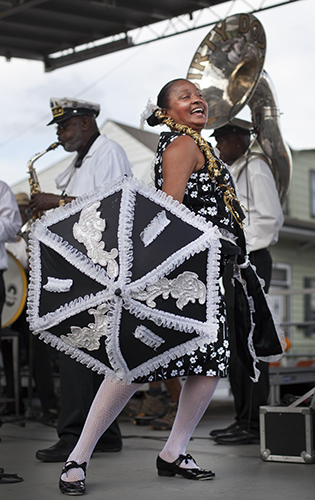 Jennifer Jones in One Note at a Time

The Bultmans are not the only people who stepped in to help musicians recover after Katrina. We meet the affable Mike Corrigan, a Horn Doctor in the mobile Musical Instrument Repair Shop. He and his team drove their van down to New Orleans to lend a hand in the recovery. Corrigan tells us that a guy named Tuba walked away with his own Tuba and an accident-prone female horn player also benefitted from this quasi-charitable enterprise.

The clips of various bands playing might be too short and unsubstantial for jazz enthusiasts, but this is less of a music documentary than a film about a city’s musicians, many of whom live on less than $15,000 a year, despite their contribution to the city’s culture. Bethany likes to think the clinic has become a partner in the musicians’ lives, so that ‘they come to us rather than wait six months; but we do not accept full responsibility. We are not the life style police.’

The welfare of the musicians is dependent on a multitude of factors and nothing is guaranteed. In 2013 The Clinic became a federally designated patient-centred medical home, but in 2014, all reimbursements were cut when Republican Governor Bobby Jindal removed Louisiana from the Federal Health Insurance reforms to curry favour with his conservative Republican cronies. Between 2008 and 2016, despite Obama’s efforts, Jindal ran a repressive healthcare system in the state. His legacy is not going to improve with Donald Trump’s destruction of Obama’s Affordable Care Act.