Home / LIFESTYLE / REVIEWS > / FILM REVIEWS / A fascinating, riveting Holocaust documentary that fails to get to the heart of the matter. 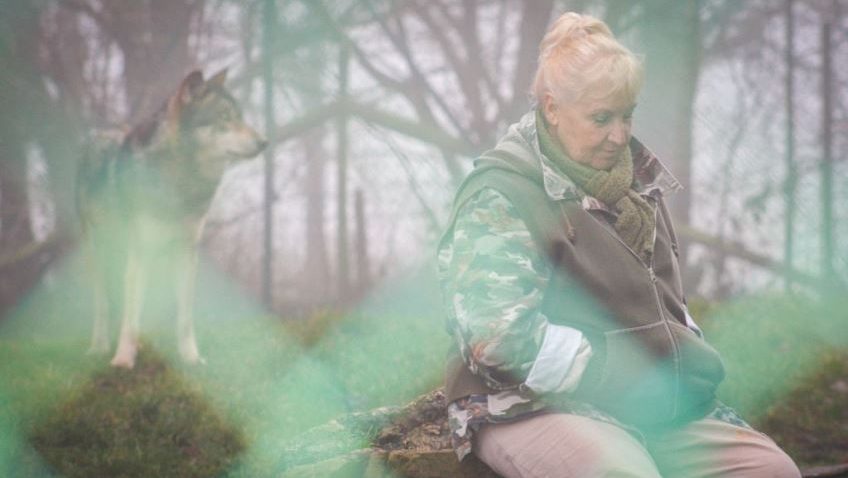 A fascinating, riveting Holocaust documentary that fails to get to the heart of the matter.

Sam Hobkinson’s Misha and the Wolves is one of those multi-layered documentaries like Three Identical Strangers, Tickle, or The Artist and the Thief that draw you into one story, only to have the nature of the story change as layers are peeled away to reveal a very different, even darker story underneath. In these cases, the filmmakers are taking the journey with the audience and do not know themselves how the story will end. But with Misha and the Wolves, Hobkinson did know as the truth emerged in 2008.

When the story begins, Misha Defonseca is a Belgium immigrant living in Millis, Massachusetts with a husband absent from the story. That is hardly the most surprising part of the film, but his absence, along with that of the co-author of Misha’s autobiographical best-seller (in Europe), Misha: A Memoir of the Holocaust Years, is one of many nagging details that do not seem quite right – either with Misha’s story or with Hobkinson’s well researched, fascinating, but frustrating film.

According to one of the many articulate talking heads in the film, almost all female, one day (some 23 years ago) Misha goes into Temple Beth Torah and tells the congregation that she is a Holocaust survivor. The jaws drop further when she describes her escape from the unsympathetic, Catholic family with whom she was placed when her parents were arrested by the Nazis and taken to Germany. Like other Jews hoping to escape the Nazis, she survived by keeping to the woods and raiding local farmhouses at night for food. But unlike any other Holocaust story, little Misha was guarded, and kept company by a pack of wolves.

When Jane Daniel, the local owner of a one-woman publishing company, Mount Ivy Press, hears the story, she has no trouble in convincing Misha to write a memoir. In fact, it was to be co-written by a friend of Jane who is not mentioned in the film.

Generous donations from the Temple Beth Torah community followed. So did a television documentary at a nearby wolf reserve that confirmed Misha’s affinity with the animals, adding veracity to her story. Then there was the book deal (A Memoir of the Holocaust Years was published in 1997). With that came interest from The Walt Disney Company and the promotional opportunity to appear on Oprah.

Misha’s last-minute refusal to plug her book on Oprah’s show is the first sign of trouble ahead. When, not surprisingly given Daniel’s tiny marketing budget, the book does not sell well, Misha (and her ghost writer) slaps Daniel with a lawsuit claiming she failed to market the book properly and, worse, that she hid royalties in offshore accounts. When Disney learns of the legal dispute, it backs off. The courts sympathise with the Holocaust victim and Daniel faces bankruptcy.

Meanwhile, since Daniel did not retain European rights, Misha’s memoir becomes a hit in Europe where the book and film rights were sold separately. Through clips of archival footage Hobkinson shows us how a French film and the translated book turned Misha into a talk show celebrity in Europe.

At a low point in her life, Daniel decides to defend herself and retaliate. She hires a lawyer and a Belgium Holocaust survivor to do research in situ. Hobkinson seems to delight in revealing, in painstaking detail, the discrepancies in Misha’s story as they keep rolling in. For starters, Monique de Wael was born Catholic and never ran away from Etterbeek. There was no adopting family.

Rest assured, Misha’s real story is even more gripping, and almost as heart-breaking as the story she tells the Millis congregation, so if you don’t know it, go see the film without reading more.

For Hobkinson constructs the film as though no one does know about it, perhaps to create suspense and reveal all those layers in the present tense. But in the process, he spends too long on Misha’s fantasy (we repeatedly see animation of a little girl in the woods with wolves) and on the meticulous research to discredit it which is, in a sense, beside the point.

Too little time is left to focus on the psychological aspects of the deception in the wider context of Holocaust stories. As the Belgium researcher says, Misha is both a victim and a villain. What prompts her to fantasise and change her history is another traumatic experience for a young girl in WWII, but one with which we have much sympathy.

Since the most unbelievable of Holocaust stories have been proven to be true, with the exception of a core of “deniers”, most societies are now, thankfully, willing to believe and condemn. But false stories play into the hands of Holocaust deniers, another aspect of Misha’s story that is unexplored. Hobkinson himself muddies the water when he puts Misha on the screen for interviews, only in the credits informing us that Misha played no part in the making of the film and is portrayed by an actress.