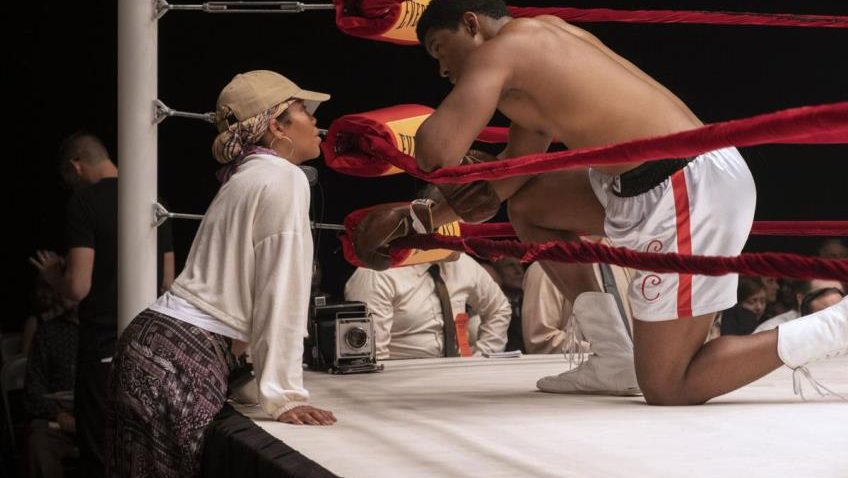 It is a sign of the times that one of the best films of the year is the directorial debut of a black woman, Academy Award winning actress (If Beale Street Could Talk) Regina King; working with an essentially all black cast, and from a script by Afro-American playwright Kemp Powers. Powers’ riveting, electrifying play, One Night in Miami, had its European premiere at London’s Donmar Warehouse in 2016 and whether you saw it or missed it, you will not want to miss this thrilling adaptation.

One Night in Miami is a thought-provoking, character and issue-driven story that is imagined, but based on a meeting of four very real, high-profile black men. What makes the film particularly topical and urgent is that all four characters are at a crossroads in their lives and in the life of the civil rights movement. The setting is the deep South, five months before the passage of the Civil Rights Act.

Here is what is true. On February 25, 1964, the 22-year-old underdog from Kentucky, Cassius Clay (Eli Goree) beat Sonny Liston to become Heavy Weight Champion of the World and invited his friend, singer-songwriter-record label entrepreneur Sam Cooke (Leslie Odom Jr, Hamilton, The Wire) into the ring. Clay also invited Malcolm X to the fight, and we see Malcolm X in the audience with his new camera. Congratulating Clay at the segregated Hampton House Hotel after the fight were Cooke (who added an e to the family name in an attempt to mask his family’s servile identity), American Football League (AFL) superstar Jim Brown (Aldis Hodge) and Nation of Islam spokesman Malcolm X (Kingsley Ben-Adir).

Two days later, Clay risked his career and hard-won celebrity by announcing that he was abandoning his “slave name” for Muhammad Ali and converting to Islam. Four months later, Cooke was dead, aged 33, shot in a seedy LA motel in disputed circumstances. The following year Jim Brown resigned from the AFL to pursue his film career (The Dirty Dozen, The Running Man, Any Given Sunday) full time and Malcolm X was assassinated by Nation of Islam fanatics in Manhattan. He was about to deliver a speech at the Organization of Afro-American Unity (OAAU), a secular, Pan-African group that he founded after leaving the Nation of Islam when he was felled by 21 gunshots, although conspiracy theories for his death and Cooke’s abound.

It is a credit to Powers and King that, while not dramatised in the film, these future events come as no surprise, although Cooke’s sexual activity – he had three children in addition to those from his two marriages – that might have led to his death, is not mentioned. Nonetheless, Clay’s self-confident defiance; Brown’s self-belief and rational, pragmatic and principled nature, and Malcolm X’s hidden insecurity and justified paranoia, (if not his hypocritical womanising) are so well immersed in the characterisations that their fates seem inevitable.

Powers opens up his own play, not to detract us from its stage origins, but to delve deeper into what the characters were grappling with just before the Clay fight. A series of opening scenes show us how, despite their success, all four were struggling with their identity in the face of double standards and racial injustice. On the back of his hit songs like You Send Me, Cooke is debuting at New York’s Copacabana, but he bombs with the snooty, white audience. Desperate to salvage the gig, he sings (beautifully) Tammy’s in Love, while a woman audibly whispers to her husband that she prefers Debbie Reynold’s version.

In a particularly chilling scene, Jim Brown drives to the mansion of a Mr Carlton (Beau Bridges) who welcomes the football hero on his veranda and refers to how far back their families go in the community of Saint Simons Island, Georgia. When Brown offers to help the older man move some furniture, however, Carlton reminds him that no negroes are allowed in the house. In their dimly lit, claustrophobic living room, Malcolm X discusses with his wife (Joaquina Kalukango) his risky plan to challenge the Nation of Islam by securing Clay’s support and public conversion.

If Clay, Cooke and Brown were hoping to party with the city outside following Clay’s victory, Malcolm X, accompanied by his sinister Nation of Islam minder Kareem (Lance Reddick, Charon in the John Wick films) had other ideas. In Powers’ and King’s vision, instead of celebrating on that pivotal night, Clay, Cooke and Brown confront their dual identities as black role models in a white world, who are sidestepping the civil rights movement that is raging outside.

Tensions in the four men’s lives are already high, but the meeting brings out unspoken rivalries and ideological differences that Powers captures in brilliantly balanced, dramatic debates. When Malcolm rants that Cooke is the only one not taking a pay cheque from a white man, Brown reminds him, “you don’t even have a job.” Cooke describes the musical empire he is building and, by keeping the copyright, signing on black artists, and letting groups like the Rolling Stones cover their songs for huge royalties, he is building a powerful black business that white people want a piece of.

But while Cooke and Brown argue cogently that financial independence is the key to power, it is not enough for Malcolm X. In one of the most potent scenes in a film packed with them, Malcolm X plays Bob Dylan’s new hit, Blowin’ in the Wind before the silent group. He then asks Cooke how a white boy from Minnesota “speaks more to the struggles of our people than anything you have ever penned.” Cooke looks shaken and humbled. Malcolm X has scored a point. Throughout the night you might be actively reassessing your own responses to these articulate arguments.

Malcolm X is the instigator, but, plotting his break with the vengeful Nation of Islam, dependent on Clay’s conversion to pull it off, and tailed by the FBI, he is the most troubled. In this long night of the soul, each man digs deep inside himself to emerge anew. The cast is so convincing that when, at the end, Leslie Odom Jr sings A Change is Gonna Come on mainstream TV’s Johnny Carson show, you believe you are hearing Sam Cooke delivering the song that replaced Billie Holiday’s Strange Fruit as the black anthem of the decade.

You can also read our review of If Beale Street Could Talk by clicking here.