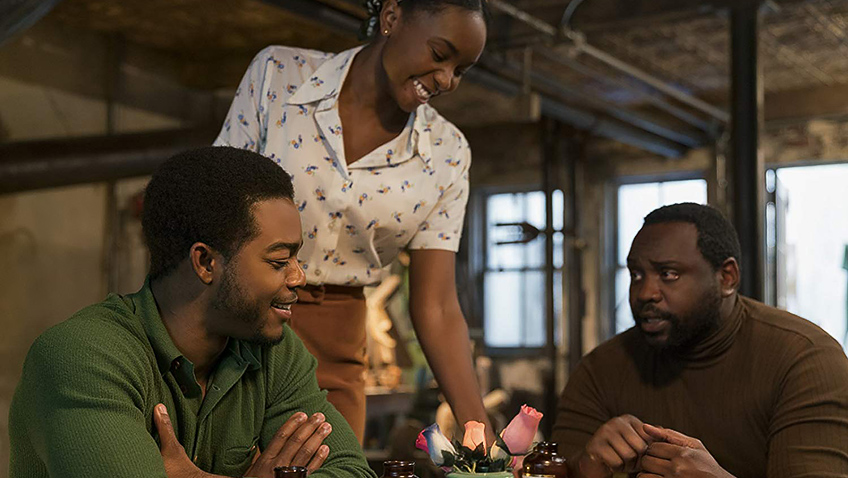 There is a powerhouse combination at work here, with writer/director Barry Jenkins, whose film, Moonlight, famously triumphed at the Oscars over La La Land in 2017, and James Baldwin, whose novel, If Beale Street Could Talk

, has the force to change perspectives. Both works want white audience to reassess their reactions when they see a black man in jail talking to his young, pregnant girlfriend through security glass. Jenkins’ adaptation, his direction and his actors not only bring the book to life but, in some ways, improve it, with Moonlight cinematographer James Laxton behind the camera with a different atmosphere. That the film is no match for Moonlight is due to the source novel

and the idealistic, self-conscious adaptation.

The plot is simple. We are in New York, circa 1974. Alonzo ‘Fonny’ Hunt (Stephan James) has been accused of rape on flimsy evidence, save for the eye witness testimony of a corrupt, racist cop. The family of Fonny’s pregnant fiancé, Tish Rivers (KiKi Layne) do everything in their power to prove his innocence before the baby’s birth. The film and the novel

share many identical scenes and actual lines of dialogue, beginning with this knockout line from Tish’s first-person narration: ‘I hope that nobody has ever had to look at anybody they love through glass.’

Childhood friends Tish and Fonny have, at age 19 and 22 respectively, become lovers and the film shows us this transition. Fonny, who dropped out of a vocational course, stealing enough tools to become a sculptor in a cramped city basement studio, invites Tish to see his flat after a stroll. Their tender love making is captured in all its glory – as well it should be as it leads to the symbolic African America baby who must be raised by a single mother while his role model father is in jail.

Tish breaks the news to her understanding, loving mother Sharon (Regina King) shortly after informing Fonny. Fonny was arrested by a villainous officer Bell (Ed Skrein) for allegedly raping a stranger (Emily Rios) on the other side of town from where he was at the time. His friend and witness, Daniel (Brian Tyree Henry), is a parolee and apparently pressured into silence. Even if the Rivers family could afford a better lawyer than the one they have, Fonny would not receive justice.

The two families need to come together to support the young couple, but instead, the women feud. In a dynamic scene, Fonny’s mother, Mrs Hunt (Aunjanue Ellis) – a pretentious, religious fanatic with airs above her station – curses the baby, blaming Tish for her irresponsibility in having a child that no one can afford. Sharon, and her older daughter Ernestine (Teyonah Parris), literally throw Mrs Hunt and her two unmarried daughters out of their apartment. Fortunately, the two fathers, Joseph Rivers (Colman Domingo) and Frank Hunt (Michael Beach) get along well and decide to work overtime on the docks for Fonny’s legal defence, supplementing their overtime with theft. 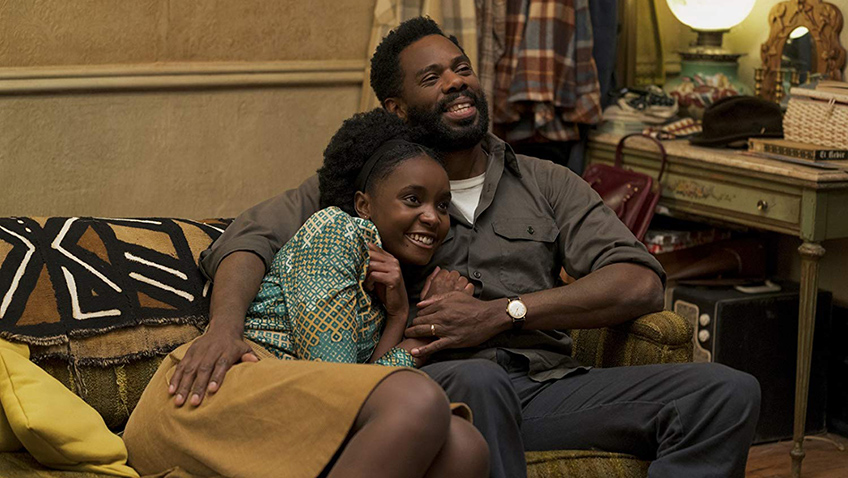 Colman Domingo and KiKi Layne in If Beale Street Could Talk

Tish also gets a job, the only African American on the perfume counter of an upmarket department store. Tall, thin and pretty, she looks like a model, particularly in the colourful early 1970’s dresses that are so retro they could spark a trend.

The film shifts not only in time but in tone and feeling, from the romantic opening, in which two handsome young, colourfully dressed African American lovers stroll along the river in the autumn sunlight, to the Rivers’ apartment, with its social-realist décor.

Few directors can turn a conversation between two men into poetry the way Jenkins does. He did it throughout Moonlight, and again here in one scene that, in the book, has less impact. Credit is also due to Brian Tyree Henry’s performance as Daniel, a character with a structural and moral purpose. He is here to foreshadow his friend Fonny’s false arrest and to describe the horror and lasting trauma of prison life (something Fonny is too protective of Tish to do when she visits). As the two former friends talk, you can see Fonny’s ‘there but for the grace of god go I’ fear. 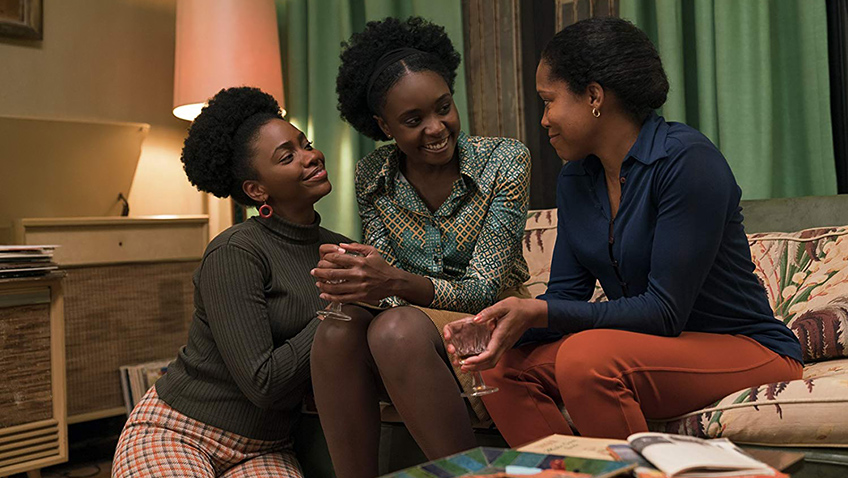 Regina King, Teyonah Parris and KiKi Layne in If Beale Street Could Talk

. But this well-acted segment (Regina King is up for the Best Supporting Actress Oscar nomination) completes the portrait of Sharon as a strong woman, determined to fight for her daughter’s happiness and for her grandson. This mission is not without danger, and so it also points to the lengths a poorer family has to go to when it cannot afford private detectives.

Those who like their films fast paced, with an intricate plot and character development might be disappointed. In this story strength derives from the love – between a man and woman; between a mother and daughter; and between a father and his daughter – that is needed to hold the black community together. Despite his resorting to theft with Frank, Joseph represents the responsible father who bucks the stereotype of the absent African American male and the father who would, (as does Mrs Hunt) shun both Fonny and Tish for having a baby they cannot afford. 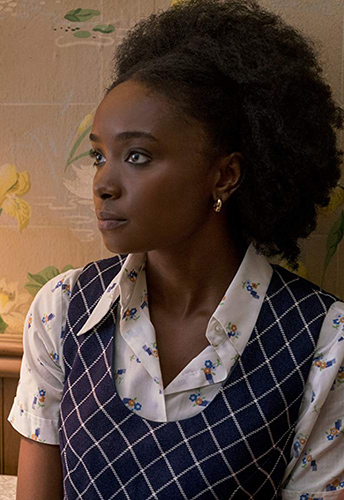 KiKi Layne in If Beale Street Could Talk

The film explains the title by quoting Baldwin: Every Black person in America was born on Beale Street (in New Orleans), an indication that Jenkins, too, is creating a universal story of the black experience in white America. Jenkins goes one step further in romanticising the story to increase our empathy and moral outrage. Baldwin has a character describe Fonny as ‘ugly’ (in the sense of not handsome) although Tish ‘didn’t see it that way’, presumably because she could see through his external looks into his character, the way we all should look at people. Tish is no looker either. By having two great looking actors portraying the pair, we miss that point and fall into the trap of judging people on their appearances, too.

Similarly, Jenkins leaves out the information that Frank Hunt was sacked for stealing and Tish’s ‘carrying a package I had lifted from the Jew’. She is not stealing necessities like food, but art supplies. But the Jewish landlord, Levy, (Dave Franco) is the only landlord who will rent an apartment to the young couple, so Tish’s moral high ground plummets in the novel

. She is more of a passive victim in the film.

The mix of social realism and romanticism works better in Moonlight, because here in If Beale Street Could Talk we are conscious of being manipulated into seeing what, ultimately, we are meant to see. The film lacks the central metaphor, the poetry, the subtlety and the morally- compromised protagonists of Moonlight, as the message takes over.