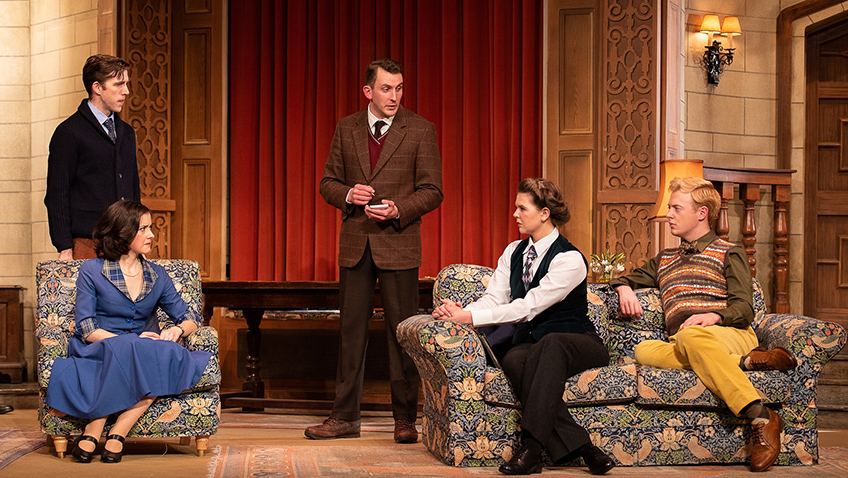 The Mousetrap, the world’s longest-running show, has been enticing audiences into theatres non-stop since 1952. That’s more than 65 years! Agatha Christie based her play on Three Blind Mice, a 30-minute radio drama she wrote five years earlier at the request of Queen Mary, mother of George VI. Less perceptive than some of her fictional detectives, she expected the piece to last around 8 months on stage and was as baffled as anyone by the play’s universal appeal and ongoing longevity. She summed it up in a nutshell, though, when she said, ‘It is the sort of play you can take anyone to. It’s not really frightening. It’s not really horrible. It’s not really a farce, but it has a little bit of all these things and perhaps that satisfies a lot of different people.’ 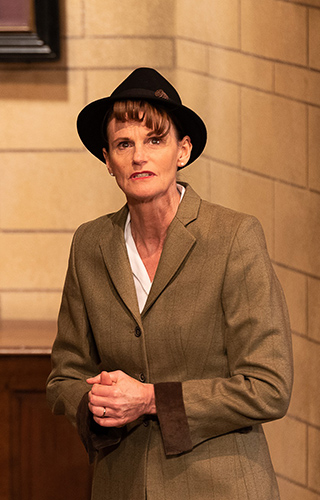 Gwyneth Strong in The Mousetrap

The novelty of a murder drama filled with clever intrigues and surprises must have been pretty sharp and new to folk almost seventy years ago. We of today, though, are steeped in long decades of Christie characters and mysteries, while society’s attitudes have shifted a lot since then. Yet somehow the play retains a freshness and charm and is still an intriguing, undemanding, cosy entertainment. Released from any obligation to update pace, political correctness, stereotypes or cliches, the piece is delightfully frozen in time in a wintry, draughty post-war Berkshire that features rationing, listening to the wireless and allowing characters to chat in logical, revealing progressions.

The eight stereotypical characters become trapped together in an all-embracing Agatha Christie World of Cliches at a posh country manor guesthouse, cut off and isolated by five feet of very sudden snow. Enter a major, a mannish woman, a foppish man, a starchy matron, a devoted, dutiful wife with her fifties’ husband, a policeman facilitator and an unexpected exotic foreigner. Add a slow, expectant build-up to murder, strings of clues and hints to potential killers and motives, touches of humour and human torment, a scream and a twisty denouement, and Robert’s your uncle!

Over the years, many a famous actor has taken on a Mousetrap role, some actors clocking up thousands of performances. For us, on a beautifully evocative set with stained glass, wood panelling and fireplace, old furniture and implied rabbit warren access routes, Lewis Chandler sparkles as the chirpy, playful, boyish Boris-blond Christopher Wren, delighting with his lovely singing voice as well as his charm. Gwyneth Strong as stern, straight laced, fierce Miss Boyle, doesn’t suffer fools (or horses?) gladly. Indeed, all the character stereotypes, none overdone, gently play out as expected – more or less.

This production is less about a big build-up of nerve-wracking suspense, tension and threat and more about watching with bemused interest and curiosity, sporting an affectionate, amused smile. But the lure of The Mousetrap is as strong as ever and it’s a bucket-list event for people the world over. Millions have already discovered whodunnit, who they dunnit to and why they dunnit. Millions of others are still eagerly pouring in to find out.