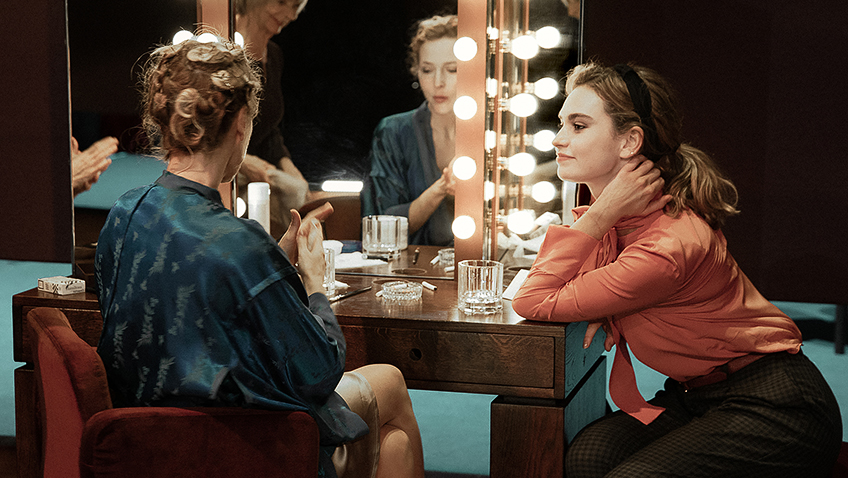 All About Eve, the classic 1950 backstage movie, famed for its back-stabbingly abrasive wit and Bette Davis’s performance, was nominated for 11 Academy Awards and won 6.

Joseph L. Mankiewicz’s screenplay is a satire on theatre people, a breed apart, who are portrayed as shallow and egocentric.

Fasten your safety belts it’s going to be a bumpy night. 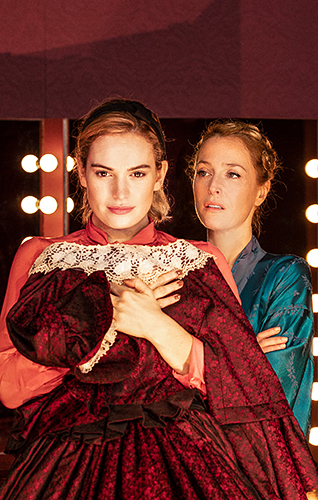 Gillian Anderson and Lily James in All About Eve

Eve Harrington, insatiably ambitious, wants to be a famous actress more than anything else. She manipulates and deceives all those who befriend her, not least Margo Channing, the ageing legendary Broadway star, whom she intends to usurp.

Audiences who know and love the film will be particularly interested to see what the Belgian director Ivo van Hove has done with it and hope he has not ruined it.

One advantage is that Makiewicz’s screenplay is already very theatrical and that van Hove sticks to it. The only major change to the script is that Margo is no longer 40 but 50, which for today’s audience makes more sense.

The real problem for any production, however good the actors are, is how on earth can they compete with memories of definitive performances by Bette Davis, Anne Baxter, George Sanders, Celeste Holm and Thelma Ritter?

Van Hove’s solution is for the production to upstage the actors with live camera work and to show, amongst other things, Margo Channing vomiting into a lavatory bowel.

The set, designed by Jan Versweyveld, is a huge box set. The walls rise to reveal a cluttered backstage full of little rooms, actors and stagehands. Furniture is regularly brought on and carried off.

Above the stage there is a huge screen and some major scenes are seen only on film.

Gillian Anderson (far too beautiful for Margo) is discovered with her back to the audience sitting at her dressing table looking at her mirror image and what she sees, the audience sees in huge close-up on the screen.

Much later Anderson looks into the mirror and, with some clever photographic editing, the audience watches Anderson’s face ageing very fast. Later still, when Lily James (playing Eve) looks into the same mirror her face changes into Anderson’s.

Ivo van Hove’s production is clever but distracting and never as good as the original film.