Home / LIFESTYLE / REVIEWS > / THEATRE REVIEWS / We all wind up with something or with someone, and if it’s someone instead of just something, we’re lucky, perhaps… Unusually lucky – Tennessee Williams 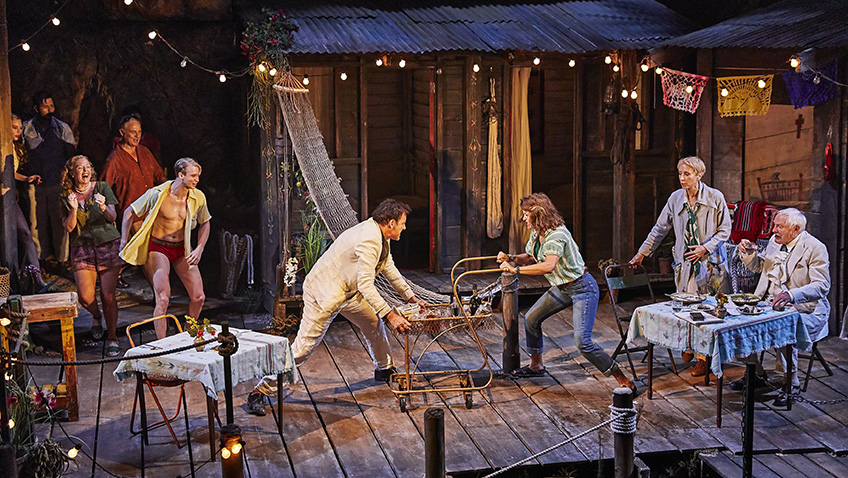 We all wind up with something or with someone, and if it’s someone instead of just something, we’re lucky, perhaps… Unusually lucky – Tennessee Williams

Tennessee Williams’ The Night of the Iguana premiered in New York in 1961 with Bette Davis, Margaret Leighton and Patrick O’Neill. A watered-down film version with Richard Burton, Ava Gardner and Deborah Kerr, directed by John Huston, followed in 1964.

It was to be the playwright’s last critical and popular success. The play is rarely revived and James Macdonald’s production is its first London revival in 14 years. 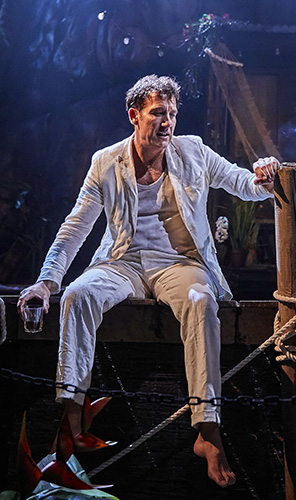 Clive Owen in The Night of the Iguana

Williams draws on his own demons for the characterisation of Shannon (Clive Owen), a defrocked priest, who has been driven out of his church on account of his fornication and heresy and is making a living in 1940 as a tour guide in Mexico. It is a job he is about to lose after yet another incident, this time with a minor, who is travelling with a party of all-female Baptist college teachers.

Cracked up, he takes refuge in a run-down hotel in the jungle, run by a former lover (Anna Gunn), recently widowed, who is keen for him to stay on and satisfy her rapacious lust and the lusts of the wives of the husbands who stay at the hotel.

He has a spectacular breakdown and becomes so violent that he has to be tied up in a hammock. “All women,” he complains, “want to see a man in a tied-up position. They work at it all their lives.”

Unlike the captured iguana, Shannon is not likely to escape.

A 97-year-old poet (Julian Glover) arrives at the hotel, accompanied by his granddaughter (Lia Williams), a New England spinster, who is pushing forty. They are itinerants and broke. To make money he recites his poems and she draws portraits of holidaymakers.

She is not intimidated by Shannon and unexpectedly agrees tells him of two, the only two sexual experiences she has ever had. “Nothing human disgusts me,” she says,” unless it is unkind, violent.”

The image, which disgusts the audience far more, is Shannon’s memory of seeing poor people searching for something to eat in a pile of shit.

Clive Owen, feverish, nervous, wearing a crumpled baggy linen suit, looks like a man whose emotional bank account has run out. Lia Williams, cool, calm, intelligent, has the unsentimental resilience of an experienced hustler who is used to being lonely. Anna Gunn’s affable, jealous, raunchy widow is definitely not a woman to be messed with.

Finty Williams is very convincing as a furious Baptist teacher who is determined to get Shannon sacked and jailed. The Nazi-Germans holidaymakers, based on an obnoxious group Williams met on his travels, are merely caricatures and acted as such.