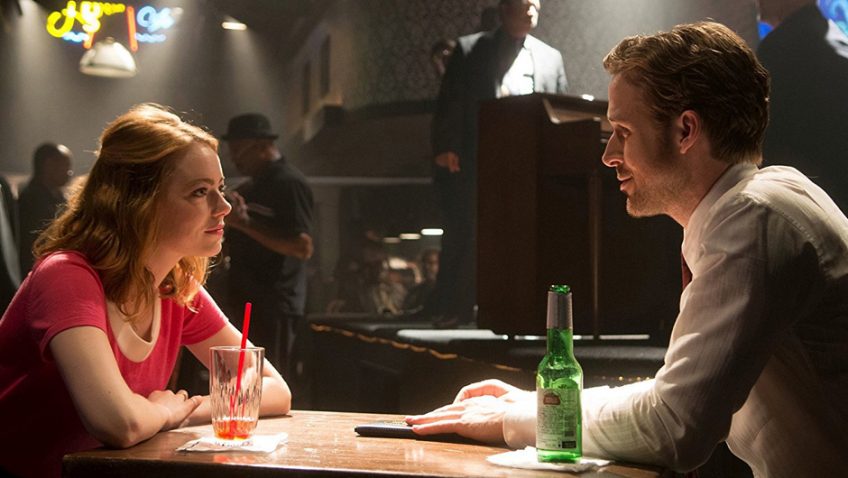 Ever since its premiere at the Venice film festival last summer the accolades, awards and hype surrounding the American wunderkind Damien Chazelle’s (Whiplash) La La Land

, have been building.  La La Land

is being touted as a new direction for cinema as it pays tribute to the Golden Age of the 1950’s American musicals – with a modern spin.  But there have been numerous modern musicals including Pitch Perfect, Into the Woods and Frozen. The music is by Justin Hurwitz and the lyrics by Benj Pasek and Justin Paul, but if you are hoping to hear something akin to Some Enchanted Evening, You’re Rockin’ the Boat or You’ll Never Walk Alone, forget it.

Mandy Moore did the choreography, but don’t expect Singing in the Rain or An American in Paris. Don’t expect the voices of Gordon MacRae and Shirley Jones or the dancing of Fred Astaire either. The talented Ryan Gosling (who has never bettered his stunning breakthrough role in Half Nelson) learned to play the piano and tap dance to an impressive standard for the film. Sadly, though, his dance numbers with the vivacious, big-eyed Emma Stone are stilted, while their singing is – to put it politely – strained.

The film opens with an expensive set piece. It is a giant burst of colour and energy, after which the dance numbers are anticlimactic. A traffic jam on the spectacular Judge Harry Pregerson Interchange suddenly erupts into a party. Instead of road rage, the drivers and passengers (all acrobatic 20-somethings) emerge from their cars singing and jumping among, and on top of the cars to the promising song, ‘Another Day of Sun’ – although smog is more accurate. The choreography is more parkour than Jerome Robbins, but it’s the most unusual thing to happen on the 1993 Interchange since Keanu Reeves and Sandra Bullock jumped a bus across an unfinished construction gap there in the 1994 film Speed.

There are two passengers, however, who have more serious pursuits on their minds. Aspiring actress Mia (Stone) is gabbing on her mobile phone, blocking impatient jazz lover Sebastian’s (Gosling) convertible. He honks at her and they exchange hostile gestures before driving away into their respective lives. (Don’t worry, in The African Queen, it took a long time for Hepburn and Bogart to warm to one another, too). Their lives have one thing in common that will unite them and then drive them apart.  Both are romantics with big goals that they put above everything else.  In one scene Sebastian – clearly jazz-obsessed Chazelle’s alter-ego – asks his sister, Laura (Rosemarie DeWitt), ‘why do you say ‘romance’ like it’s a dirty word?’ Laura accuses him of ‘living like a hermit and driving without insurance.’ From this we know that he’s a disastrous match for Mia who, in between acting auditions, serves flat whites to movie stars from the coffee shop on the Warner lot.

We see stay-at-home Mia being dragged to a party by her three attractive roommates with the girls –  dressed in yellow, red, green and blue (Mia) – a rainbow skipping down the street. Far from being the occasion of another big dance number, the party is an excuse for Mia to show how special she is by leaving.

She is lured into a restaurant by Sebastian’s jazzish piano playing just before he is fired by his boss (a cameo from Whiplash award winner JK Simmons) for deviating from the menu of anodyne Christmas songs.  Mia, enchanted, approaches Sebastian who pushes past her abruptly and storms out of the restaurant. When they meet again at a pool party, Mia playfully gets back at Sebastian by requesting that the band play ‘I Ran’ (so far away) by A Flock of Seagulls, much to Sebastian’s humiliation.  Presumably looking for their respective cars, they end up walking together to the Griffith Observatory for their first tap dancing pas de deux. The setting – famously the setting of the great teen movie Rebel without a Cause – reminds them that they could see the film at the Rialto Cinema (now closed).

The film is divided into two halves. In the first a man and woman fall in love and in the second the relationship falls apart, but not the bond between them. The second half of the film starts to resemble A Star is Born before copying the plot of The Umbrellas of Cherbourg, announced with a ‘five years later’ caption.

Are the lovers really unable or unwilling to communicate or do they realise there is no room for two driven workaholics in a relationship? Sebastian assumes Mia wants him earning money and reluctantly puts his dream of opening a pure jazz club on hold to join a rock-style band. The leader and lead singer is an old schoolmate named Keith (John Legend) and when Keith sings the terrific song, Start a Fire (which Legend co-wrote), Mia leaves the packed venue in disgust. Sebastian has sold out!

While Sebastian becomes indispensible to the band’s success, Mia focuses on writing a one-woman show as a showcase for her talents. At one point she wants to give up on auditions and write, but it seems becoming a big film star will do.  Mia is noticed by an agent and is asked to audition for an unlikely sounding project, to be shot in Paris. This is a throwback to films like An American in Paris and Fred Astaire’s 1950’s musical Funny Face, when affordable air travel made Paris the exotic, intellectual and romantic destination of choice for post-war Americans.

When Sebastian is home from touring for a night, he and Mia argue. Mia accuses him of abandoning his dream and her. What did she expect of a successful band? Sebastian spits out, adding, ‘maybe you liked it when I was on my back so you could feel better about yourself.’ Ouch!  Is he right?   Chazelle claims the film is about dreamers and Mia’s big audition song, ‘The Fools Who Dream,’ seems to back up that claim.  But Mia and Sebastian are not dreamers, they are doers.  Seldom have two characters in a film spent so much time working – and we see them at work. They are so busy working they have no time for one another. Post-truth romance.

Swedish cinematographer Linus Sandgren assures that the film looks terrific – as does L.A. Chazelle, an East Coast boy, focuses on the touristy L.A. a bit like Woody Allen did with London in Match Point.  In a kind of montage, the lovers take a ride on the Angel’s Flight, a funicular in that opened in 1996 and is actually now closed. This funicular is itself a facsimile of the iconic 1901 original that was tragically demolished along with the cherished architecture of working class Bunker Hill. Like eternal love and this musical, the Angel’s Flight  isn’t the real thing.