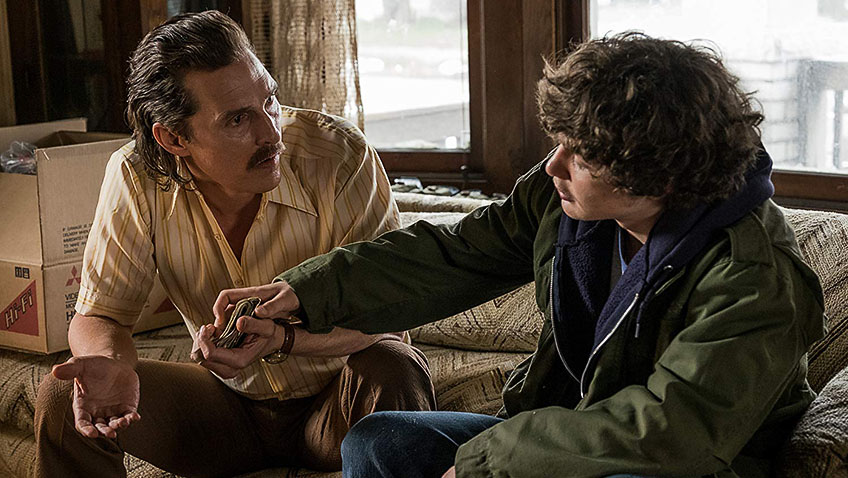 An amazing, tragic true story that never finds its focus

If not quite a genre, there is a category of films about dysfunctional families, one that must now include, at the top of the list, White Boy Rick

. The attraction of Yann Demange’s film is that it is based on a true story with an atmospheric depiction of 1980’s Detroit; stars the Oscar winning actor Matthew McConaughey (Dallas Buyers Club, The Wolf of Wall Street, The Lincoln Lawyer); and is the second film directed by Yann Demange, whose first feature was the critically acclaimed 71. Demange made good use of up-and-coming actor Jack O’Connell in 71 and must be banking on newcomer Richie Merritt in the role of Richard Wershe Jr, the eponymous protagonist of the film. But if Demange intends to gain our sympathy for Rick as the victim of his family and environment, he does not entirely succeed.

It is 1984 and Detroit is battling a crack epidemic and losing the War on Drugs. At a busy gun fair Richard Wershe Senior (McConaughey) and his 14-year-old son Rick (Merritt) are spending quality time together browsing the thousands of weapons on offer. Dad shows his son how to bargain and get two for the price of one with his superior knowledge and a little blackmail about the vendor’s licence.

While Dad might rely on the unsavoury side-line of selling guns for cash flow purposes, he has legitimate goals. He informs Rick that the future is in video stores, and he is going to open one.

Though grandma (Piper Laurie, great) and grandpa (Bruce Dern, ditto) who live across the street seem normal enough, Rick’s ramshackle home lacks a mother’s love to say the least. Dad bursts in with a loaded gun and finds his older daughter Dawn (the excellent Bel Powley, A Royal Night Out, The Diary of a Teenage Girl) in bed with a tall, hefty African American who may be her dealer. Dawn rushes out in the snow in her underwear, but her lover is gone. Much to Rick’s chagrin, Dawn, a drug addict, moves out to be rid of her dad.

The next morning Rick comes downstairs to find his father being interrogated by the Feds who can put him at the gun fair and are trying to convict him on charges of possessing silencers without papers. They show Richard Sr. photos of two dead guys, killed with the type of rifle he had purchased.

Shortly thereafter, Rick is approached by Officer Mel ‘Roach’ Jackson (Brian Tyree Henry) and then FBI agents Snyder (Jennifer Jason Leigh) and Byrd (Rory Cochrane) who convince him to become an informant. Rick understands he will be taking the heat off his father, but he is also interested in the money. Armed with an ID showing he is 21, his mission is to take down drug dealers. 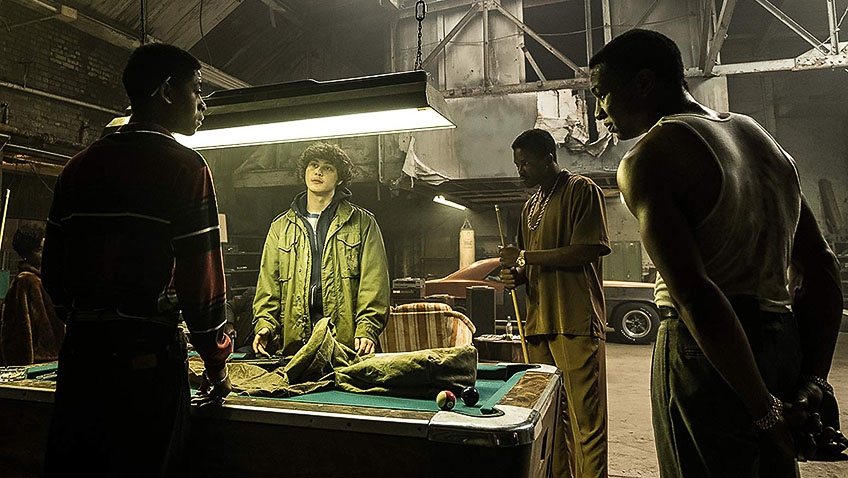 When it comes to Rick’s activities with the Detroit black drug community, the film might lose a few viewers. Little attempt is made to identify the many players although three, Boo, ‘Lil Man’ and ‘Big Man’ Curry (played by RJ Cyler, Jonathan Majors and YG respectively) are key players in the film. The mumbling amongst the various gang members and the reluctance of the three scriptwriters’ (Andy Weiss with Logan Miller and Noah Miller) to provide any exposition means you might not follow the trajectory of Rick’s relationship with the Curry clan for whom he works whilst under cover.

We do learn that Rick’s informing helped the Feds to prosecute corrupt cops and to bring down Johnny Curry whose brother-in-law was the mayor of Detroit. From 1984 to 1986 Rick made good money (there is a scene in which Rick Senior finds $9,000 in cash under his son’s bed and learns the truth about his son’s job). 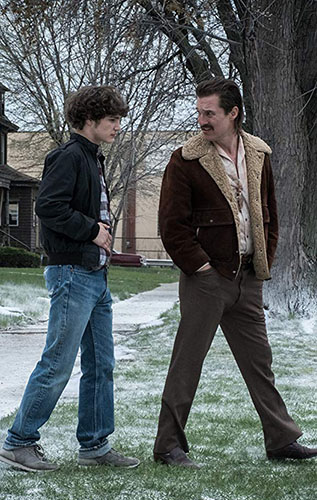 When in 1987, the Feds (having obtained a phone bugging permit) let Rick go, he decides to return to high school – he had dropped out to work for the FBI. You so want this to happen, particularly after Rick not only survives being an informant, but survives being shot in the stomach at close range in retaliation for his informing activities. When Rick Sr. breaks the news that no schools want him because they fear for the other students’ safety, you feel sorry for Rick Jr for the first, and perhaps the last time. The remainder of this review contains spoilers, for although this is a true story, it is not a well-known one.

There are plenty of reasons to feel sorry for Rick if the case were made. But not only does Rick seem to enjoy his undercover experience, but when that money stops, Rick Jr convinces his father that the short-term way out of their money problems is for Rick Jr. to deal in drugs. He will use his now in-depth knowledge of the drug trade to make money (presumably for their video store). The audience is thinking, ‘Why would you do that?’

Somewhere in all this, Rick has a baby after hooking up with a former school friend, although he is not faithful to her. Again he loses our symapthy.  And the two Ricks drag Bel home for an agonising detox from which she emerges as the healthy, functioning old sister who brings Rick’s adorable mixed-race baby girl to prison to visit her teenage father.

If the film is pointing the finger at the FBI’s callous practices, it does not do a convincing job, although we notice how the FBI covers their tracks and are not implicated in Rick’s unjust fate. At the time of his arrest, the Michigan Constitution had a law stating that anyone convicted of possessing over 650 grams of a controlled substance would be automatically sentenced to life without parole. A caption informs us that White Boy Rick has been behind bars for almost 30 years and that, ironically, some of the drug dealers he helped convict were freed long before him.

That Rick Jr’s sentence was absurdly harsh is an addendum. Presumably, no lawyer out to make his name was on hand to take on Rick’s cause, but we never hear of that in the film. Rick was released last year, but for the previous 30, had been the only non-violent drug offender convicted as a minor who was still in jail. Demange seems to be less interested in examining the morality of the FBI’s treatment of informants than in selling us on the sordid, pathetic tragedy of a boy whom we never really get to know.