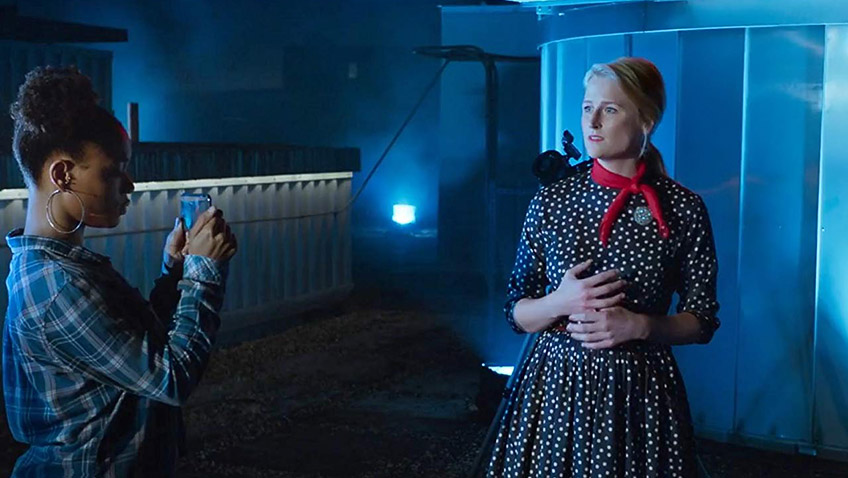 Carol Morley and Lynne Ramsay are, along with Andrea Arnold and Clio Barnard, arguably the best known female writer/directors of their generation and both got their starts around the turn of the century with Lottery funding, after making numerous short films. Morley is best known for her excellent documentary Dreams of a Life and for The Falling, a psychological melodrama centred on a girls’ school. A year after Ramsay’s uncompromising debut, Ratcatcher, Morley made her feature debut in 2000 with an autobiographical documentary feature, The Alcohol Years. That might have been a fitting title for Martin Amis’ 1997 novel Night Train

, on which Morley’s third feature, Out of Blue is very loosely based. You cannot but wish that, unlike Lynne Ramsey’s riveting adaptation of Jonathan Ames novel You Were Never Really Here

, Morley disregards almost everything that makes Amis’s book so intriguing and enjoyable. 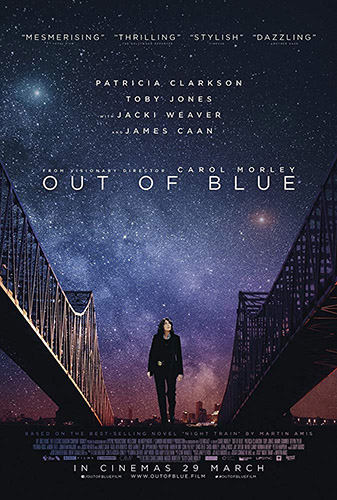 The main character, middle-aged Detective Mike Hoolihan (Patricia Clarkson), a recovering alcoholic working in homicide for the New Orleans Police Department is taken from Amis’ book (although the city is left unidentified in the book), as is the case that comes to challenge and ultimately haunt her. Hoolihan is asked to investigate the mysterious death of a beautiful and well connected astrophysicist and black hole expert, Jennifer Rockwell (Mamie Gummer).

Jennifer is the daughter of influential industrialist (James Caan) Col. Tom Rockwell and if he sounds like the sleazy manager of a successful New Orleans blues group, you are giving him too much credit. We first see Jennifer, a red head scarf covering her blond hair and draped around her neck, giving a lecture on the roof of the Observatory and frankly, her ‘we are part of the stars and the universe’ spiel is about as far away from Stephen Hawking as a black hole would take us.

When Jennifer is found dead on the rooftop in what is either a very bloody murder or suicide, Hoolihan has her work cut out for her. Like an Agatha Christie novel (but unlike Amis’s novel) everyone is a suspect and there are no real clues.

There is Jennifer’s physicist boyfriend (Jonathan Majors) and her defensive, adult twin brothers (Brad Mann and Todd Mann). One is aggressive and menacing, the other quiet and they look as innocent as the Menéndez brothers. Then there is her creepy boss, Professor Strammi (Toby Jones) – an anagram for Martin Amis; her neurotic mother (Jacki Weaver) who is holding more secrets that Don Draper; and her patriarchal, authoritarian father, with a New Orleans hat, a prop-like cane that he does not appear to need and a sense of entitlement he does not deserve.

Given that this is a Carol Morley film, Amis’s police procedural, hilarious, no-nonsense police jargon, wise cracking dialogue and first person narration disappear for what becomes a meandering, metaphysical exploration of Jennifer’s death. 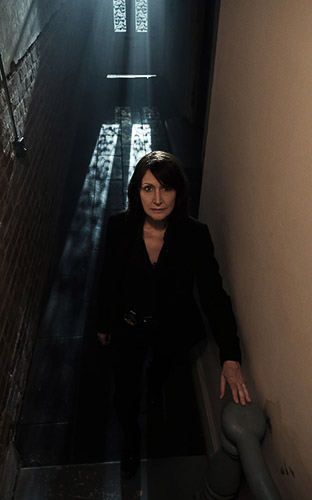 Patricia Clarkson in Out of Blue

Suddenly Mike wanders into a claustrophobic interior full of trinkets like the home of a compulsive hoarder who just closed down her cheap antique shop. Mike finds a broach that provides an important key – but we are none the wiser. Jennifer’s boyfriend (who is black, but this never comes up) actually says, ‘I blame her father for encouraging her interest in vintage stuff.’ As it happens, her father is probably culpable of a lot worse than that.

Professor Strammi’s alibi centres on a white cat in a sealed box, and he tells Mike ‘in my quantum mechanics world, the cat can be alive or dead.’ Jennifer’s mother who denies that her daughter ever ran ‘with the wrong crowd’, tells us that, according to Jennifer, our nose and hand could come from different stars. Then there is a mysterious postcard with the message, ‘I’ll be seeing you.’

But before you can make sense of any of this, Mike Hoolihan begins having dreams, or else, she is getting too close to the case. Like Captain Marvel discovering she is really Carol Danvers from planet Earth, Mike suffers flashbacks from her childhood that start complicating her investigation.

In the novel, Mike has every right to feel close to the case, as Col. Tom was her boss and mentor on the police force and she grew up child-minding Jennifer. Later, she stayed in Col Tom’s house while he weaned her off alcohol, with Jennifer assisting. The case is a conflict of interest, but Col. Tom entrusts no one else but Mike with the investigation.

After admiring Nicole Kidman as an alcoholic, middle-aged cop in the recent neo-noir thriller Destroyer, the promise of seeing Patricia Clarkson in a neo-noir drama playing a troubled cop is appealing, particularly for those who last saw Clarkson in the hilarious political satire The Party. But here Clarkson is so subdued and cryptic that she has effaced her personality and not found another.

In The Falling, Morley takes a story about mass hysteria in a girls’ school and over complicates it with a mother/daughter subplot that takes over and dominates the friendship of two devoted school girls. Here the attempt to frustrate a police investigation with pseudo-physics; childhood demons that begin to sound depressingly familiar, and the absence of a plot, combine to leave the viewer on the sidelines.