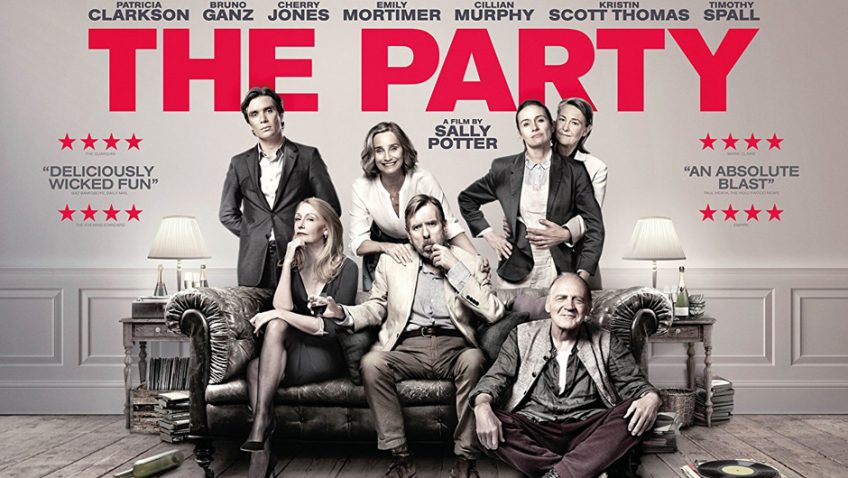 Despite their similarities, don’t confuse Sally Potter’s (Ginger and Rosa, The Tango Lesson, Orlando) new film, The Party, with Thomas Vinterberg’s Danish film Festen (translated as The Party here), shot under the Dogme ‘95 rules. With its bare-boned look, black and white cinematography, real-time action, lack of CGI and unity of time and place (it is shot entirely within the confines of a family home) it could be a British Dogme 95 film. It could be, but this exploration of sexual politics is so very best-of-British. 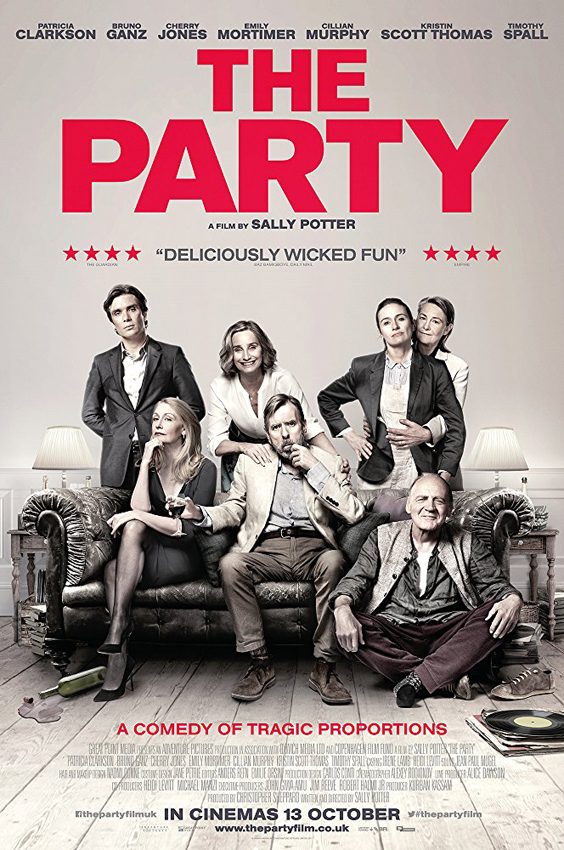 Potter’s tragic-comic film is one glorious, hilarious pun on the title, in which a middle-aged politician named Janet (Kristin Scott Thomas) throws herself a party to celebrate her appointment as the new Shadow Health Minister. As with Festen, it does not take long for the celebration to implode. Very subtly (we never discover which political party Janet belongs to, but you can guess), Potter explores the politics of personal relationships with their own, less defined ideologies, deceptions, support systems and corridors of power.

Janet does not look particularly comfortable in the kitchen but, feeling confident after her appointment, she’s not about to call in the caterer for this intimate dinner party. The worn, but roomy Victoria home in North London is just the sort an ideological politician would share with her academic husband Bill (Timothy Spall). Bill does not seem to be sharing Janet’s ebullient mood. He spends most of film in a living room chair in an alcohol-induced stupor, listening to records. Potter doesn’t miss a trick in choosing the song, ‘I’m a Man’ as one of those records. Could Janet’s man be recognising the reality behind the throwaway line: ‘if Denis Thatcher and Philip May can trail behind their wives, so can Bill?’

Gradually the guests arrive, including Janet’s close, old friend April (Patricia Clarkson) and her German husband Gottfried (Bruno Ganz), an unlikely life coach and a self-proclaimed (‘Tickle an aroma therapist and you get a Nazi’) spiritual healer. Martha (Cherry Jones), a Women’s Studies professor who wears her militancy on her sleeve arrives with her younger, unassuming partner Jinny (Emily Mortimer), a cook.

If April is estranged from Gottfried (‘this is our last supper,’ she reminds him), whom she belittles throughout the evening (‘Shut Up, Gottfried, your clichés are insupportable’), Tom (Cillian Murphy), who works in the City, arrives alone, still in his Prada suit. After informing Janet that his wife, Martha, will join them later, he rushes into the bathroom where he splashes the perspiration off his face and snorts cocaine. Tom takes a good, long look at himself in the mirror and then reveals that he is carrying a revolver. 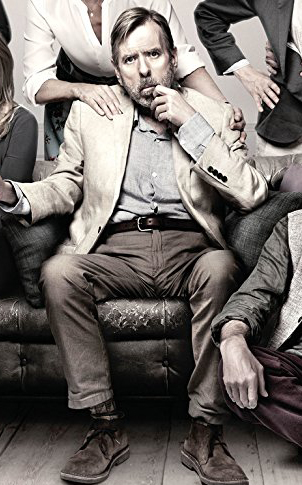 Timothy Spall in The Party

Despite this conveniently locked setting and the varied array of suspects, this is not an Agatha Christie murder mystery. Yet there is the threat of violence and a mystery here, as the film is bookended by the image of a frantic looking Janet opening the door with a revolver in her hand. And throughout the evening Janet is distracted by suspicious, phone calls and texts, all cut short.

Sit back and enjoy the twists and turns in the guests’ relationships and inter-relationships as truths are revealed and suspicions aroused. April’s support (‘you’re a star Janet, even though I think democracy is finished’) begins to look dubious and as Jenny reveals she is pregnant, Martha shows herself to be patronizing and insensitive. The announcement of triplets meets with varied reactions from the guests, concerned about the impact on the plan (a sarcastic Gottfried calls it, ‘a miracle of contraception’) although there is concern that the news is eclipsing Janet’s moment in the sun. April does not have a maternalistic streak in her body, but when she labels Martha ‘a first class lesbian and a second class thinker’ she has a point.

Jinny’s revelation is nothing, however, compared to Bill’s – and it’s not just the revelation that husband of the Shadow Health Minister has private health insurance. His announcement unsettles the equilibrium of the evening and confirms, what we’ve already begun to suspect, that no one is going get much dinner.

Left alone with Gottfried, Bill, an intellectual with no interest in spiritual matters, becomes intrigued by the hope in Gottried’s anti-establishment ramblings. And despite Bill’s decidedly announcement throwing a spanner in the works for Janet, she defends him, reminding the guests that, ‘this is the man who gave up a professorship at Harvard for me.’ Actually, though, it was Yale.

The only false note in this taut gem is the ending, which, not wishing to give anything away, is overkill and not particularly convincing.

The acting is superb from this ensemble cast, although Patrician Clarkson is the undisputed champion of mud-slinging one-liners. While you are busy laughing at Potter’s black humour and wit, the similarities between the traitors, bullies, upstarts, and undermining in personal relationships and those in party politics will not go amiss.