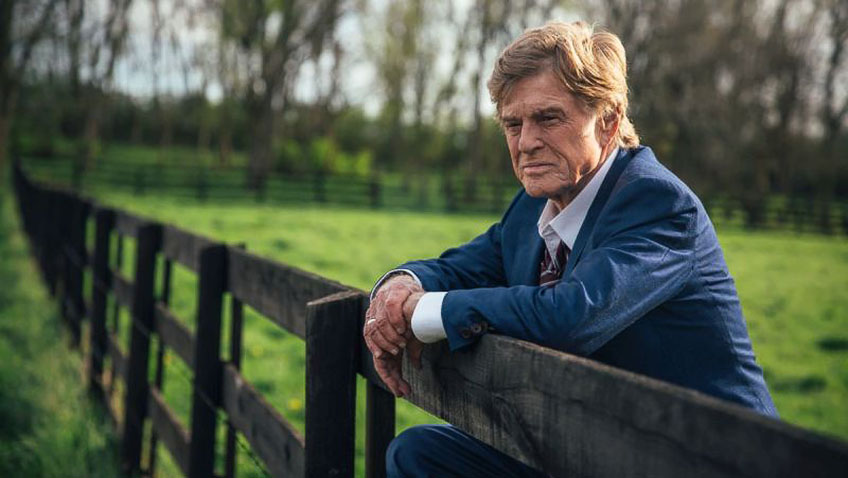 Author and journalist David Grann interviewed career criminal Forrest Tucker in prison for his 2003 New Yorker article, which begins, ‘Just before Forrest Tucker turned seventy-nine, he went to work for the last time.’ Work for Tucker, who went under many other names, was, since he was 13 and stole a bicycle, robbery. In the second sentence Grann comments that ‘he was still a striking-looking man, with intense blue eyes…’ If you are a talented filmmaker like David Lowery (A Ghost Story) and your breakthrough film, Ain’t Them Bodies Saints won the Grand Jury Prize at Robert Redford’s Sundance Festival; and if you’ve ever seen Butch Cassidy and the Sundance Kid and The Sting, there would be only man alive to cast as Tucker in a film adaptation.

The 82-year-old legend reportedly claims it is his swansong. The score is terrific, but Redford makes music just by smiling at Sissy Spacek in a dinner somewhere out West. It’s just as well as it is difficult for some audiences to overlook the fact that this charmer never did an honest day’s work in his life; lived for most of it off the tax payer in prison; left two children with no father, at least one wife homeless, and terrorised hundreds of mainly female bank tellers by flashing a gun in his overcoat pocket. They remember him as being polite, complimentary, and always smiling. When they handed him the briefcase of money, he would always say thank you.

Lowery’s job, as scriptwriter/director, is to make us overlook the reality of a career bank robber, much as we in Butch Cassidy and the Sundance Kid and The Sting. For this he depends heavily on Redford’s sparkling eyes; his ‘don’t take life so seriously’ smile and his unparalleled charisma, still intact.

A caption tells us that this is mostly a true story, and it is surprising true. This presents Lowery with a problem in structuring his film, not only in terms of repetition, though there is that. Tucker was not only arguably the most prolific bank robber in US history, (he died in 2004 in the Fort Worth Federal Medical Center, serving a 13 year sentence at age 84), but arguably its greatest escape artist. His attempt to escape from Alcatraz was aborted, but he had notable, if short lived, successes.

Tucker was best known for having broken out of 16 prisons or detention centres. At 59 he built a boat called Rub-a-Dub to escape from San Francisco’s maximum security prison San Quentin which the guards mistook for a pleasure craft. These exploits alone would be worthy of a film, but the escape aspect of his life is handled through a series of quick flashbacks when, during a prison visit, he hands Jewel (Spacek), his love interest in the film, a list, with no. 17 being his current abode. ‘I’m saving the best for last’, he tells her with macho bravura, looking under-the-weather. 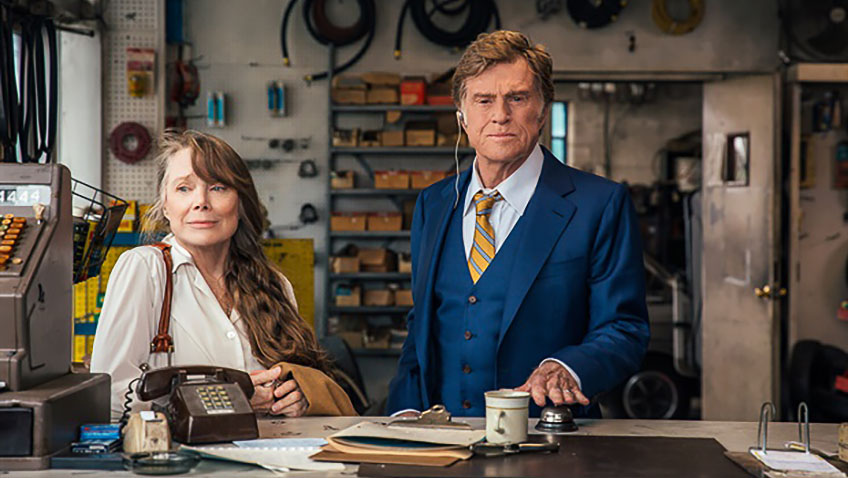 Robert Redford and Sissy Spacek in The Old Man & the Gun

Spacek’s character must be the only significant part of the film where creative licence is applied. In the film their meeting is a sublime bit of a filmmaking and acting. It is hard to believe that the scene is not adlibbed. After switching into a ‘clean’ car for his getaway, Bob Callahan (Redford), as we know him, is doing the speed limit on the motor way with police cars not far behind. He stops at the side of a road and calmly asks a woman in her late 60s, if she needs any help with her car. As he peers into the steaming engine, the police cars sail by, sirens wailing in vain. Safe, he admits that he hasn’t a clue about engines and offers her a ride.

Bob and Jewel stop at a diner and you could swear that this scene, too, is adlibbed, and that neither of these old pros is acting. The chemistry sizzles as does the repartee. Bob tells Jewel that he’s a salesman, but he knows she doesn’t believe it. ‘If I told you the truth you wouldn’t see me again’, he points out. Reacting to his presumption, she asks, ‘who said I wanted to see you again?’ ‘Well, would you?’ he asks, this time, not hypothetically. In her smile is her answer. Jewel appears to be the equivalent of his third wife, an heiress (Jewell lives on a huge horse ranch). In real life, this ‘elegant lady in her fifties’ opened the door of Tucker’s Florida home to the FBI, never imagining that the wealthy stockbroker, she was living with, Bob Callahan, was a wanted criminal named Forrest Tucker. She refused to believe them, but as he lay bleeding on his condominium floor – the FBI fired at him – she told Grann, ‘all I wanted to do was hold him.’)

Back in the diner, Bob writes his true vocation on a slip of paper, and she can hardly believe it. As Jewel turns her neck to look at a CCTV camera that he asks her imagine is a bank teller, the camera swerves away from the couple into the diner. Lowery’s shifts in camera angles and his imaginative editing (editor Lisa Zeno Churgin, is 64 and, like this film, is from the old school, having served as Assistant Editor on The Long Riders and Raging Bull) imbue the film with a lyricism that is a far cry from today’s cacophonous robbery movies. The Old Man & the Gun

is not really an action movie at all, but a tribute to the eponymous Hollywood giant.

Even when Tucker is working in what was dubbed The Over the Hill Gang, with accomplices Teddy Green (Danny Glover, whose film debut was playing an inmate in Escape from Alcatraz) and Waller (singer/actor Tom Waits, who also complements the terrific score) this is no ordinary action thriller. 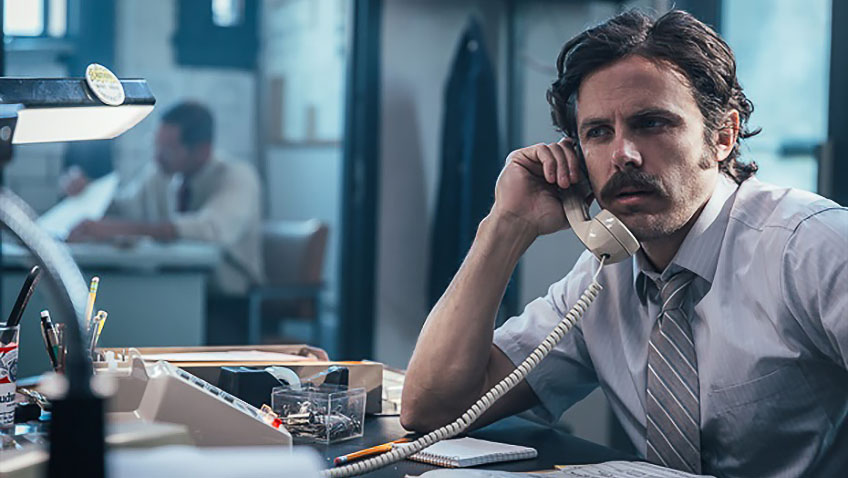 Casey Affleck in The Old Man & the Gun

There is a wonderful scene in which the gentleman robber, disguised only slightly, requests an interview with the bank manager about a loan. Police detective John Hunt, a real detective who was involved with Tucker, is played by Casey Affleck who, like Redford (as director) and Spacek (Coal Miner’s Daughter), also won an Academy Award for his role in Manchester by the Sea. Hunt is in the bank early one morning with his young son and later learns that the whole robbery took place without him even being aware. This humiliation motivates him to get his man.

Hunt and Tucker play a cat and mouse game, one that we’ve seen before in many movies including cop Clint Eastwood and criminal John Malkovich in In the Line of Fire and cop Tommy Lee Jones and fugitive Harrison Ford in the The Fugitive where a mutual respect develops between the two.

There is an aspect of this story that, given Redford’s status in the industry, is surprisingly overlooked. At some point in his long career Tucker wanted to try his hand in Hollywood, and jotted down his exploits, positioning himself as a ‘heroic underdog pitted against a vast and oppressive system.’ Ironically, no production companies were interested. Lowery avoids any psychological probing, presenting Tucker as a man who thrives on the high of a good bank robbery and was addicted, not to the money, but the thrill. He would have loved this movie.