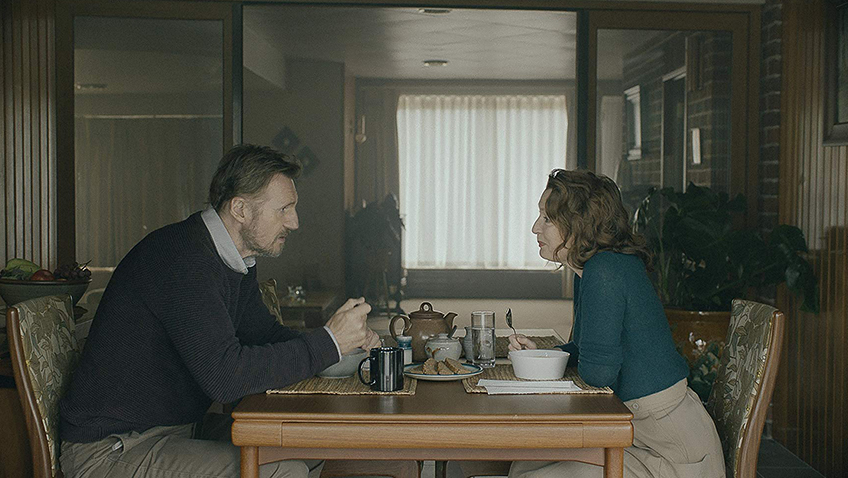 Liam Neeson (Widows, Non-Stop, Taken), and Lesley Manville (Mr. Turner, Another Year, Vera Drake) playing an ordinary, retired couple in a hospital drama set in present day Belfast? Who would have guessed? There is no Mike Leigh for Manville, and no violent chases through exotic streets and trains for Neeson. But there is plenty of pain. Lisa Barros D’Sa and Glenn Leyburn’s engrossing, claustrophobic four-hander, written by Owen McCafferty, gives this decent, unremarkable couple a tragedy that strengthenes their relationship and then another that tests it to the limit.

Walking purposefully along a waterside promenade like they have dozens of times before, Joan (Manville) and Tom (Neeson) might seem a strange couple. He is tall and handsome; she is short and attractive in a way that goes unnoticed, and although they are in their sixties, they are holding hands like newlyweds. When they return to their modest, but comfortable house, the conversation is so banal, and so natural, you know they have been married a long time.

When Joan asks Tom if he wants the shower first, he opts for a beer instead. Joan chastises him that that a beer defeats the whole purpose of the walk, but he retorts ‘I put all that effort into the walk and that enables me to have a beer’. Joan reminds Tom that their object is to get fit. This is a couple who contemplate giving up caffeine and argue about whether to buy a juicer to make tomato juice (Tom) or just eat more tomatoes (Joan). This is the responsible couple who want a healthy old age.

Tom and Joan could finish one another’s sentences, but they prefer to converse. From small comments and observations, little arguments grow, and then fade out as though tired out by their own aimless momentum. Each has an instinctive way of knowing when to back down, as the worst that can happen to them already has. Their only daughter died in an unspecified, but unnatural manner.

And then the second worst thing happens. Joan discovers a lump in her breast. If Tom seems uninvolved, it is because he cannot deal with the prospect of a positive test. He reassures Joan that it is nothing, but she is far from reassured. In the waiting room Tom complains that he doesn’t like hospitals. ‘How does being with other sick people help anyone?’ The doctor tells them that Joan needs more tests.

They stop for tea after shopping on the way home from the hospital and debate whether 3 is closer to 1 or 5. Anything to distract them from what they cannot be distracted from. Then, suddenly, Tom leans forward tenderly: ‘if you have cancer, we’ll do whatever we have to.’ This is the kind of sudden jump in thought and emotion that we can relate to in McCafferty’s nearly pitch-perfect script.

The film now turns into a hospital procedural where the filmmakers take us through every step of the couple’s ordeal, from the biopsy to the preparation for surgery, the surgery, and the chemotherapy to ensure the doctors have removed all cancerous tissue. Even the scenes in which Joan is allowed to go home are part of this process, suggesting that this couple’s nightmare is at once generic and universal and yet very personal – like death itself.

Tom keeps insisting, ‘we’ll go through this together’, but Joan knows she must make the choices alone, endure the pain alone, and die alone.

After the biopsy Joan goes home, and that night they make love. Can things get back to normal? At breakfast, Joan reflects. ‘This is going to sound strange. I’m glad our Debbie isn’t here to go through this. It would kill her.’

When Tom returns home alone one night and notices that their fish has died, he rushes out to replace it. We assume Tom wants to spare Joan from returning to more death.  He tells the saleswoman that he wants an identical fish because he doesn’t want his wife to know the fish died. ‘She was very fond of the fish, then?’, the retailer asks rhetorically. ‘No’, Tom answers, ‘she hated it.’ He is thinking of Joan but it is Tom who cannot bear to return to an empty house and the spectre of death. 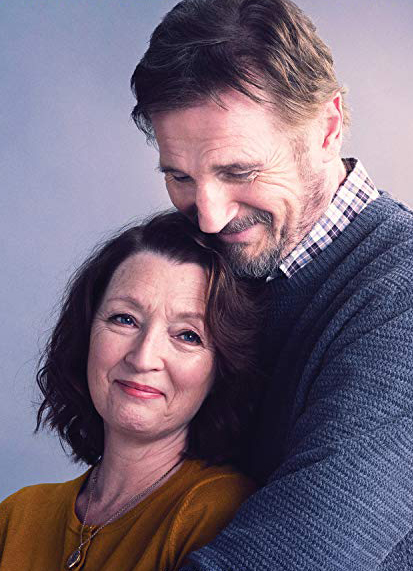 At home, Joan complains about her hair loss. They share an intimate moment when Tom cuts her hair. ‘You look beautiful, he says and then jokes, ‘I never really liked your hair anyway’. But that night she is suffering, and he cannot concentrate on the football match on TV.

Who is going to see a movie about a woman in hospital with cancer, you might ask yourself? Or you might think it sounds too much like all the hospital soaps on television, but without the office politics and affairs. The big difference is not only in the calibre of the acting – Neeson and Manville are superb – in the writing – McCafferty has an ear for how couples and interact – and the laissez faire directing, but in the point of view. Here we are not concerned with the doctors, but with the patients and their loved ones.

Ironically, television is, though, everywhere. Turned up loudly it masks the groans, and during the gruellingly slow and uncomfortable chemo the patients watch television to distract them from the procedure though it never does. Patients is plural here. Joan recognises Peter (David Wilmot), their daughter’s primary school teacher in the hospital. While hoping perhaps to talk about Debbie, she finds someone who she can talk to about her own experience, which Tom can never understand.

Meanwhile Tom befriends Peter’s partner Steve (Amit Shah). He finds solace in listening to Steve talk openly about his fears for being alone when Peter dies. Steve tells Tom that at the end of Peter’s time at home he watched a lot of TV. ‘I’ve never watched so much rubbish TV in my life.’ He then adds, poignantly, that he enjoyed it. Although Tom cannot imagine watching TV while Joan dies, he feels less alone after talking with someone who understands what he is going through. He and Joan decide to befriend Steve, who is all alone after Peter dies.

But why are Tom and Joan all alone? Their phone never rings, and no one knocks on the door bringing dinner to Tom while Joan is away, or flowers for Joan while she is convalescing at home. They must have neighbours; they both worked and must have colleagues; and even if they are both only children, they must have other relatives. If Debbie’s death is behind their refuge in a kind of cocoon, it would tell us something about their way of dealing with grief and bring another layer to their relationship with Peter and his survivor, Steve. But what you can surely take away from this film is that there is no such thing as ‘ordinary’ love.