Home / LIFESTYLE / REVIEWS > / FILM REVIEWS / An ambitious biopic of Billie Holiday and her unlikely biographer promises more than it can deliver. 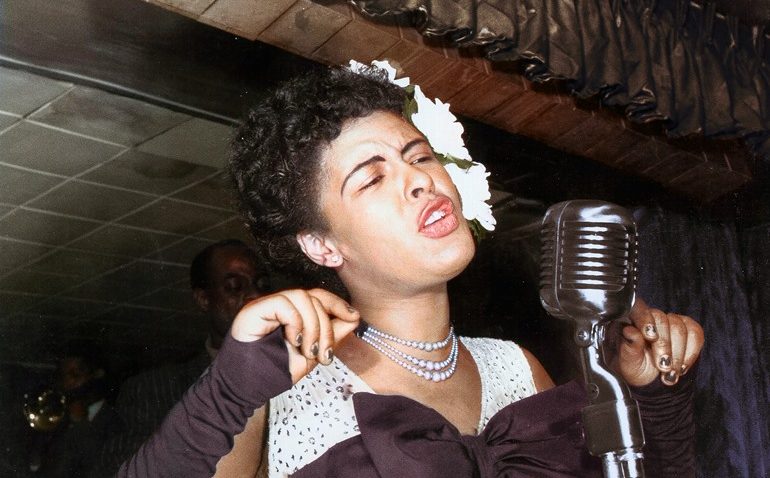 An ambitious biopic of Billie Holiday and her unlikely biographer promises more than it can deliver.

Obsessed with the Jazz singer Billie Holiday, from the late 1960s until her death in 1978, Linda Lipnack Kuehl recorded 200 hours of interviews with everyone she could track down who knew Billie including friends, relatives, pimps, fellow musicians, band leaders, managers and a FBI informer. The book Kuehl intended to write based on all this research was never completed and excerpts from it, and the raw tapes, have never been heard – until now. James Erskine’s documentary, Billie, is nothing if not ambitious. He attempts to edit into a narrative biopic of Billy Holiday some of Kuehl’s interviews while addressing the question of why this white, Jewish journalist from a middle-class family in the Bronx was so fixated on Holiday. Holiday might have been buried in a Bronx cemetery, ten years before Kuehl began her research, but Erskine’s film suggests there was more to it than that.

That the result is disappointing is perhaps inevitable in a 98 minute film in which archival footage to connect the interviews and clips of Billie singing compete for time with a more introspective look at both women. With so many unreliable narrators telling Billie’s story, and so little documentary evidence surviving, Holiday’s true story may never be told. And with only Linda’s sister Myra Luftman, representing the Kuehl camp, her story, so enticingly sinister, remains frustratingly eclipsed and vague

There is not much about Billie Holiday’s life, that began in Philadelphia on April 7, 1915, that is not already known. If Holiday’s autobiography, Lady Sings the Blues is not entirely candid, Stuart Nicholson’s 1995 biography and Julia Blackburn’s 2005 biography With Billie (purportedly also based in part on Kuehl’s tapes) do more than fill in the gaps. They paint a picture of a woman whose life makes Judy Garland’s look relatively normal. For as well as the horrific drug abuse, alcoholism, manipulative and abusive men, gruelling schedules and money problems in both women’s lives, Holiday had to contend with race discrimination and harassment as well as imprisonment by the FBI. That chapter in her life receives a fair amount of attention here, but a film entitled The United States vs Billie Holiday by Precious director Lee Daniels due out in March will no doubt be more definitive and revealing.

In one interview Kruehl attempts to learn whether Billie had to blacken her relatively light-skinned face to sing with a black band, while in another segment, various members of the white musician Artie Shaw’s band discuss whether she was dropped or whether she split. It seems like a case of constructive dismissal. After putting up with sleeping in the bus on a tour in the South while Shaw slept in motels, Holiday suffered the last straw when at the band’s breakthrough gig at the Lincoln Hotel in NYC, hotel management would not let a black woman sing. Shaw, who, we hear, hit someone over the head with a clarinet in Kentucky for calling Billie a “nigger”, had to choose between his band’s future and Holiday.

You might be tempted to draw the conclusion that Eleanora Fagan’s (as she born) tragic demise at 44 from cirrhosis of the liver was inevitable. Her father abandoned the family to play in a Jazz band and Eleanora was passed around to various relatives while her teenage mother worked. A “cousin” happily recounts that Billie turned tricks before she was 16. Pulled out of school at 11, she worked in a brothel at age 12, and by age 14 she was in Harlem singing at the Hot Cha Club. Pigmeat Marham and white record producer John Hammond (instrumental in the lives of Bob Dylan, Bruce Springsteen, Benny Goodman and more) both claim to have discovered her. At 22 she was the lead vocalist in Count Basie’s big band and the white monied crowds were descending on Harlem for music (and sex). Did John Hammond get her fired from that gig because of a conflict of interest? The stint with Basie was brief, but the film raises the (unsubstantiated) suspicion that Linda Kuehl’s flirtatious interviews with Count Basie had something to do with her falling from a balcony in a blizzard in Washington D.C. in 1978.

Billy herself tells us that there was a record machine on her street where she first heard Louis Armstrong. ‘I wanted to sing like he played’, she says. ‘I always knew I could sing, but I never knew I could make money from it.’ Make money she did, but the fact that she died with only $70 in the bank and $750 on her person was no doubt down to her attraction to unsavoury boyfriends or husband/managers. As we hear in the film, she was shopped to the FBI by Joe Glazer, a gangster manager who purportedly got her jailed “for her own good” – to force her to give up hard drugs. Her disastrous road trip with The Lady Day Orchestra in 1950, the brain child of manager John Levy, a pimp by profession, ended with both of them in hospital: she broke a bottle over his head, and he knifed her. Two years before her death she married Mafia enforcer Louis McKay who “managed to knock Billie right across the street with a single blow of his fist.” She was in the process of divorcing him when she died intestate, leaving McKay to inherit her royalties.

James Erskine’s absorbing documentaries examine how passionate, professional athletes have used their medals and trophies to change their sport and society’s view of it, or conversely, succumb to the system while trying. (Pantani: The Accidental Death of a Cyclist). In The Ice King, the gay, ballet loving skater John Curry mastered-the requisite acrobat repertoire to win Olympic Gold so that he could start his own company, choreographing balletic works where his skates never left the ground. In The Battle of the Sexes, Billy Jean King used her tennis talent and fame to push for equality for women. In Maiden (which Erskine Executive Produced), Tracy Edwards, slaved away in a yacht’s kitchen to get a break, and when that failed, she skippered the first all-female crew in the Whitbread Round the World Yacht Race.

Erskine seems to have been attracted to Linda Kuehl’s unfinished biography of Holiday for a similar reason. A close look at the sporadic excerpts from the book that are “typed” across the screen suggests that Kuehl saw something else in Holiday, although Erskine’s film stops short of providing an insight into either woman’s life.

It seems, however, that while most people saw a tragic victim of serial abuse, Kuehl saw a trailblazing pioneer in Civil Rights, woman’s liberation (ironically), and musical expression. We see how Billie refused to stop singing one of America’s earliest protest songs, the gruesome, Strange Fruit, from 1939, even when the lucrative white audiences walked out of the night clubs, and the record companies refused to release it. Like a prize fighter who has to be beaten up to win the title, Holiday endured the pain and abuse to be able to sing on her own terms.

You can watch the film by clicking here.