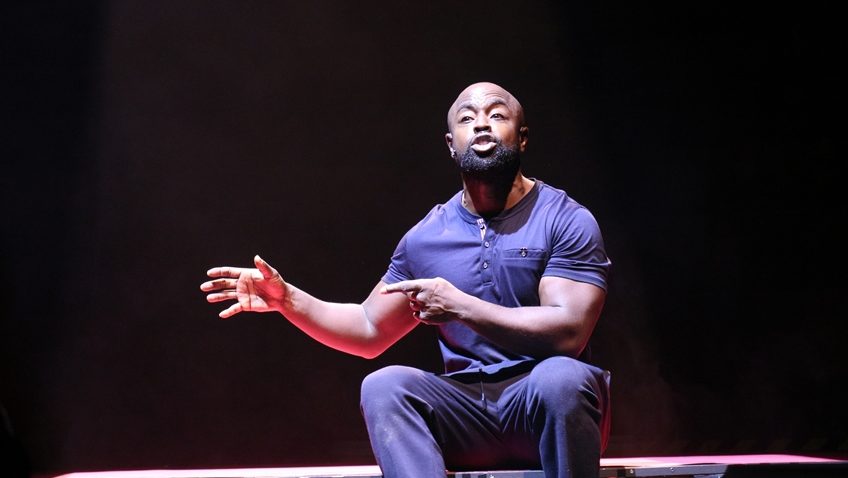 Clint Dyer and Roy Williams’s, a monologue about a white British working-class man, was seen at the National Theatre in February this year. Rafe Spall gave a BIG and brilliant hysterical performance as Michael whose racist father had just died.

Death of England – Delroy is a sequel and it is about a black British working-class man and the issues and traumas he, and other victims of racism, face: the loss of dignity and the constant negative expectation. The play is directed by Clint Dyer.

The Olivier auditorium has been turned into a theatre-in-the round and the stage is shaped like a St George cross. Giles Terera was to have played Delroy, Michael’s best mate, but he fell ill during rehearsal and his understudy, Michael Balogun, took over

The National Theatre then suffered a second whammy. Because of lockdown the play opened and closed on the same night, Wednesday November 4th. The performance was, however, filmed and this is what is being streamed now.

The play is prefaced by a statement: Keep your social and racial distance. It is repeated whilst Rule Britannia is played

What does a black person have to do to be accepted as British? “You might act like us,” says Michael to Delroy. “You might sound like us but you will never be one of us and deep down you know it.”

Delroy, a staunch Conservative who voted for Brexit, is on his way to hospital to see his white girl friend (Michael’s sister) who is about to go into labour. He is stopped and searched by the police for no reason at all.

Black people are nine times more likely to be stopped and searched than white people.

Delroy loses his cool and starts swearing. He ends up in a cell. In the courtroom he argues that swearing is part of black culture and the foul words are adjectives rather than expletives.

Death of England – Delroy will be back in the Olivier the moment theatres are allowed to re-open. The two monologues can stand alone but it would be nice to have them performed in tandem.