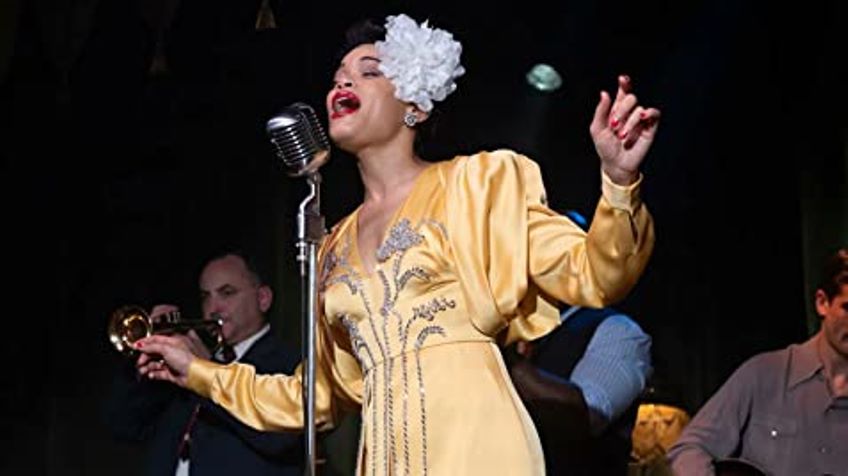 The sensational Andra Day was destined to play Lady Day, in an otherwise lacklustre biopic.

With Black Lives Matter sparking a re-evaluation of our cultural history, it is apt to take a new look at the iconic jazz singer Billie Holiday. She was hounded to an early grave (age 44) by a self-destructive bent that was triggered by a loveless, abusive childhood and perpetuated by three abusive husbands, two of whom facilitated her heroin addiction. But The United States vs. Billie Holiday makes the case that it was Harry Anslinger (James Hedlund), the first commissioner of the Federal Bureau of Narcotics, in league with a racially motivated FBI persecution that did her in. Lee Daniels’ (director of the inspirational, gut wrenching Precious) film could easily borrow the title of a concurrent film release, Judas and the Black Messiah about an African American FBI informant’s role in the murder of Black Panther Fred Hampton.

Daniels’ angle is that Holiday’s signature song, Strange Fruit, turned her into a Messiah in the segregated democracy that refused to pass a bill banning the lynching of African Americans. As Holiday’s rendition of the song, which describes black bodies hanging like fruit from trees, was as powerful as Fred Hampton’s orations, it made her a target for J Edgar Hoover’s long war on “subversive” and “radical” groups. The Judas here is Jimmy Fletcher (Trevante Rhodes) a handsome African American soldier returning from WWII to explore his career options.

To his middle-class mother’s disappointment, he takes a job with the FBI and, stars in his eyes, is assigned to the Holiday detail. But Fletcher tells his mother, ‘I could make a difference. I could be one of the first ever Negro Federal Agents.’ Although little is known of Fletcher, we see that, while he had more of a choice than William O’Neal, Fred Hampton’s Judas, Fletcher was also a pawn in the FBI’s game.

If Trevante Rhodes fails to shine the way he did in the Oscar winning Moonlight, it is because his character is ill-defined, and his role consists of popping up in every third scene just to hang around. We can never believe in the pure, romantic, but doomed love story between a mixed-up informant and his unlucky-in-love prey.

From the title you might think the film will focus on the court case that sent the singer to prison for a year in May 1947. By the end of her six-year marriage to trombonist and drug addict Jimmy Monroe (Erik LaRay Harvey), Holiday was having an affair with her drug dealer, Joe Guy (Melvin Gregg), a heroin addict she married in 1951.

Suffering from withdrawal symptoms and supposedly wishing to get clean, Holiday pleaded guilty so that she would be sent to rehab as she had been led to believe. Instead, she was given a year in prison as a result of which she lost her NYC Cabaret Card, which barred her from singing in nightclubs and bars, significantly reducing her income for the rest of her life. This was how the FBI destroyed careers.

The case and the courtroom scene are brief and Holiday’s prison term is montaged. Instead, Daniels, and scriptwriter Suzan-Lori Parks propose that Holiday’s whole life, beginning with her childhood, was one long prosecution that she would always lose. Even her financial success did not accrue to her. What she did not spend on drugs was misappropriated. Her third husband, the mob enforcer Louis McKay (Rob Morgan) not only beat her up and shopped her to the feds with planted evidence, but also usurped her earnings.

If only Suzan-Lori Parks’ script had focused on Strange Fruit and made that the thread to unite what turns out to be a confusing connect-the-dots biopic. Parks tries to avoid a cradle-to-grave biopic by relegating the influence of Louis Armstrong, the Count Basie tours and Holiday’s affair with Orson Welles, and her stab at acting in Hollywood (thwarted by her drug habit) to names mentioned in passing. The fight between her two rival managers Ed Fishman and Joe Glaser fails to register as both characters are so underwritten. Holiday’s horrific youth is presented like a silent slideshow in a drug-induced nightmare with expository dialogue explaining to what extent that past determined the self-destructive patterns in her adult life. More successful, a couple of scenes with bi-sexual Holiday and Tallulah Bankhead (Natasha Lyonne) establish the FBI’s attempt at a dirty tricks campaign much like the one that destroyed Jean Seberg (as seen in Seberg) in the late 1960s.

The story is framed by a recorded interview with fictional journalist Reginald Lord Devine (Leslie Martin) on May 3, 1957, two years before Holiday’s death. Its purpose is expository filler and to introduce the theme of Strange Fruit. ‘My audience wants to know why (if you keep getting into trouble for it) you are determined to keep singing it,’ the Quentin Crisp-inspired Devine asks. Holiday replies, stone faced, ‘Have you ever seen a lynching?’

Daniels then cuts back ten years to February 1947 with Holiday singing Strange Fruit at NYC’s Café Society, the first integrated night club in the USA. But if Daniels is aiming on making the song the focus, it is a shame there is no mention of Abel Meeropol, the white, Jewish, Communist teacher who wrote the words and lyrics after seeing Lawrence Beitler’s photograph of the lynching of Thomas Shipp and Abram Smith in Marion, Indiana on 7 August 1930.

The film shows how the FBI, frustrated that they cannot stop her singing the song, attempt to bring her down – and stop her singing – on drugs charges. Attempts were made to limit where the song was performed, but Holiday sang it until her death, including, according to some sources, in her Carnegie Hall prison comeback. In the film, which is well researched, we hear requests met with “can’t do.”

If the film makes less of an impact than it should, the same cannot be said for Andra Day’s visceral performance. She gives the best musical biopic performance since Renée Zellweger in Judy – which rewarded Zellweger with an Academy Award – and since Taron Egerton, whose portrayal of Elton John in the inventive biopic Rocketman, rewarded him with a Golden Globe and several other best actor awards. Rami Malek won an Academy Award for his role as Freddie Mercury in Bohemian Rhapsody, and he did not even sing.

Andra Day looks like Holiday, sings like Holiday, dresses and smokes like Holiday and is so convincing when she is wasted on heroin that you start to wonder if Day is into method acting. With her surname – Day – she seems destined for the role of Lady Day. Referring to Holiday’s death, Frank O’Hara’s poem The Day Lady Died also captures the audience’s reaction to Strange Fruit: “…and everyone and I stopped breathing.” Sadly, Daniels’ does not reproduce that effect.