Home / LIFESTYLE / REVIEWS > / FILM REVIEWS / The sense of outrage and righteous anger is inherent in the true story. 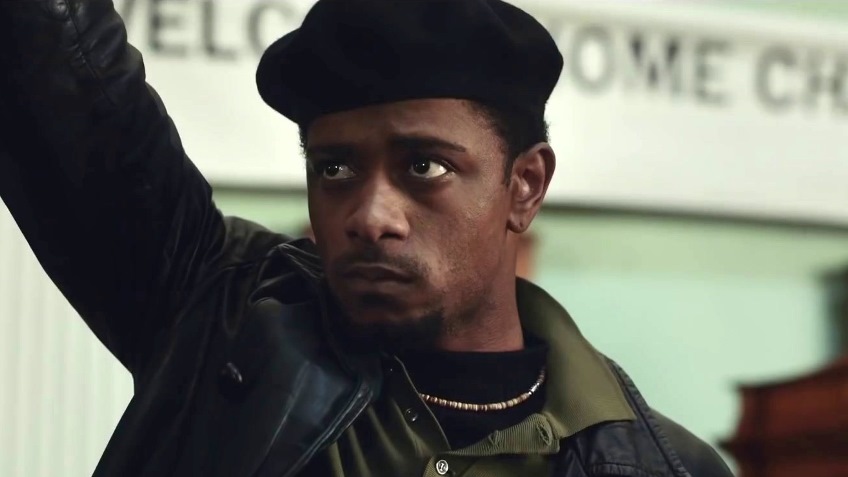 The sense of outrage and righteous anger is inherent in the true story.

Judas and the Black Messiah (from March 11, 2021 on BFI Player and on all participating digital retailers) Cert 15, 126 mins.

Arguably the most memorable exhibit at the Tate Modern’s Soul of a Nation: Art in the Age of Black Power exhibition in 2017 was Fred Hampton’s Door 2. It was made six years after the murder of Fred Hampton by 34-year-old black power artist and educator Dana Chandler, who grew up in the tough Roxbury, Massachusetts ghetto. The stand-alone sculpture is an actual door with Hampton’s name on the mail slot: scuffed and riddled with bullet holes. The predominant colours of the door are Pan-African red and green but in the upper right corner is a red, white and blue four-star insignia with the words, US Approved.

Director Shaka King demonstrates, from an opening montage covering the deaths of Malcolm X and Martin Luther King Jr, to the scandalous aftermath of Hampton’s assassination (relayed in captions at the end of the film), to what extent the murder was “U.S. Approved.” Hoover’s COINTELPRO agents (the same unit that drove actress Jean Seberg to suicide), and Cook County State’s Attorney Edward Hanrahan, using officers from the Chicago Police, carried out the execution.

Martin Sheen’s spot-on FBI Director J Edgar Hoover is the primary villain. ‘The BPP,’ he proclaims, ‘is the single biggest threat to National Security. Our counter-intelligence unit must prevent the rise of a black messiah from among their midst: one with the potential to unite the Communists, the anti-war, and the New Left.’

The Messiah turned out to be a 21-year-old from the Chicago suburbs, Frederick Hampton (played by Daniel Kaluuya). He had a capacity for uniting factions beyond what Hoover envisioned. On 14 January 1970, just over a month after Hampton’s murder, the West Side Story composer Leonard Bernstein hosted a celebrity fundraiser for the BPP, (during which Tom Wolfe coined the term “radical chic”).

In one of the few scenes where we get an idea of Hampton’s brilliance, he negotiates his way out of a tense situation with the fierce Puerto-Rican gang, the Young Lords. Arguably Hampton’s biggest achievement was ending the counter-productive infighting amongst the Chicago gangs, and harnessing the anger of the Young Lords, the Young Patriots (a white gang) and other major street gangs to work against a common enemy for social change.

The other scene is Hampton’s I am a Revolutionary speech: ‘When I leave, you’ll remember I said, with the last words on my lips, that I am a revolutionary. And you’re going to have to keep on saying that. You’re going to have to say that I am a proletariat, I am the people.’ You can hear the real Hampton on the internet, and while comparisons are perhaps unfair, Kaluuya fails to get the heart racing. He lacks Hampton’s oratory skills (and whether it is the sound design, intended for the cinema or the speech coach, he is often hard to understand). Most of all, this actor who was so charismatic in Get Out and held his own alongside Chadwick Boseman and Michael B Jordon in Black Panther, lacks Hampton’s undeniable charisma.

This would not be such a problem if King, who co-wrote the script with comedy TV series writer Will Berson and comedy duo Kenny and Keith Lucas, realised that the story is less about the Messiah than the Judas who betrayed him.

Any film about Hampton would have to fill us in on how he managed to climb to the top of the national BPP at age 21. A gifted student, he might have become a professional athlete but for his social conscience. As a teenager Hampton was leading high school walkouts and protests to hire more black teachers (so ahead of his time!). Aged only ten, he was cooking and serving breakfasts to ghetto kids, long before the BPP set up their school breakfast programme. The NAACP was too gentle for this giant and he joined the BPP.

But the only time we get up close and personal with Hampton is in two muted love scenes with Dominique Fishback’s anaemic portrayal of the beautiful, fiery activist Deborah Johnson. After her fiancé’s death, she changed her name to Akua Njeri and carried on his fight. In contrast to Hampton’s confident leadership, these whispered scenes are supposed to reveal his awkwardness on the romantic front but might have worked better with a younger actor and stronger chemistry.

More interesting is the conflicted black FBI informant William ‘Bill’ O’Neal (LaKeith Stanfield), who infiltrates the Chicago Chapter of the BPP, becoming its head of security. We see how O’Neal, a career criminal, is caught with a stolen car impersonating a federal agent and, facing a lengthy prison sentence, is offered a deal he cannot refuse. Glacial and sinister FBI Special Agent Roy Mitchell, (the wonderful Jesse Plemons) becomes O’Neal’s merciless handler delighting in turning blacks against one another, until even Mitchell is alarmed by Hoover’s corruption.

The film is based on an interview O’Neal gave in the 1987 PBS docu-series Eyes on the Prize, in which he discusses his part in the conspiracy. The film opens with a re-enactment of part of the interview. ‘I had no allegiance to the Panthers,’ O’Neal says when asked about his lack of remorse. Nonetheless, O’Neal committed suicide nine months later, aged 40. We learn little more about this Judas’s life and, as was the case in real life, there is not much of a relationship between Hampton and O’Neal. But other doomed characters, from Mark Clark (Germaine Fowler), who died with Hampton, to Spurgeon Jake Winters (Algee Smith) are completely underwritten.

As for O’Neal, we see that for $300, (about $2,250,000 today) he provided a blueprint of Hampton’s house and allegedly drugged him to facilitate the homicide. The excellent Stanfield (who had a small role in Get Out but is better known for Sorry to Bother You and Knives Out) is convincing and even looks like the older O’Neal. He injects humanity into his bad guy, expressing O’Neal’s fears about the dangers of the job and growing unease about the FBI’s ruthless intentions. O’Neal was morally challenged, but was a victim of Hoover’s war, too. At 29, however, Stanfield cannot quite convey the sense of bewilderment of a 17-year-old (yes, he was even younger than Hampton) lured by cash and “played” by puppet masters.

King’s film about this “US Approved” betrayal and cold-blooded murder on December 4, 1969 conveys the sense of outrage and righteous anger that is inherent in the true story. But for sheer visceral impact, Judas and the Black Messiah is no match for Chandler’s door.