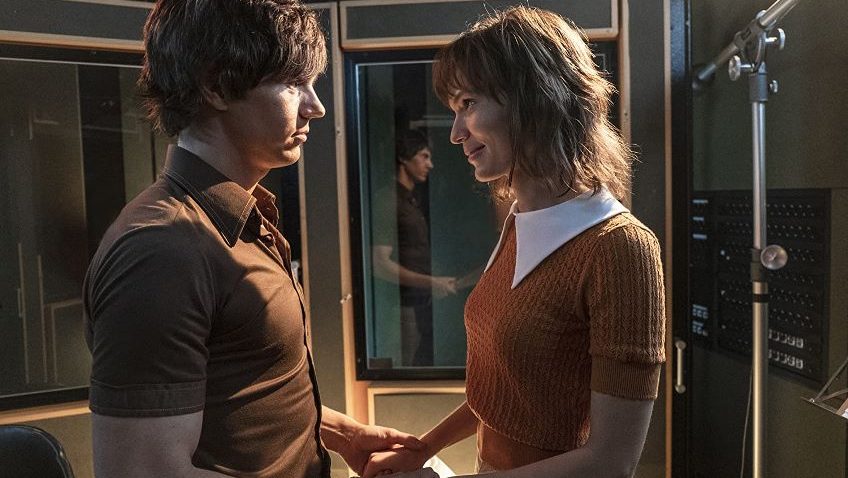 This timely and interesting Helen Reddy biopic has more soap opera than music.

First time narrative feature film director Unjoo Moon came up with the idea for a biopic of fellow Australian women’s libber Helen Reddy after meeting and befriending her mother’s heroine, long before the #MeToo movement. It is not only a movie for our times but a tribute, as its release coincides with Reddy’s obituary. The 1971 song I Am Woman which Reddy wrote, and battled with her naysaying manager-husband, Jeff Wald (Evan Peters) and Capital Records head Artie Mogull (Chris Parnell) to have released, became the anthem of the Women’s Liberation Movement and has been revived by #MeToo. The song made Reddy rich and famous.

But making a biography of a singer is arguably the most difficult of any cinematic undertaking. Despite some notable successes (Coal Miner’s Daughter, Walk the Line, Control, Rocketman, Judy, and Bohemian Rhapsody), even experienced directors like Bryan Singer have succumbed to the genre’s pitfalls.

First, you have to find a star who physically resembles the singer and then you must decide whether to have an actor who can sing or a singer who can act. If you are forced to dub a non-singing actor, you better budget for the rights to the original recordings. The biggest challenge however is to find that fine line between the singer’s personal life and the music that make us interested in that life to begin with.

In 1966, a twenty-five-year-old Australian woman arrives in the Big Apple with a suitcase, a toddler named Traci (Scout Bowman), $230, and no visa. She was naively responding to a letter that she had won a recording contract, but when she shows up to claim it, she learns two lessons: nothing is that easy and never trust men.

Reddy ( Tilda Cobham-Hervey) gets a job singing in a night club, but when she asks to earn what the band does, she is told that the band are men who have families to support. Cut to cute little Traci, sleeping in a cheap hotel with her loving mother putting on a brave face. All through the film we are reminded about how Helen’s personal experience led her to write, “I am strong, I am invincible, I am Woman”, as though talking herself into it.

Reddy is about to give up and return to Sydney. Fortunately, she looks up fellow Australian Lillian Roxon (Danielle Macdonald) a kind of Janis Joplin character who is not a rock star but hangs out with all the rock stars at Max’s Kansas City, while writing the still influential Rock Encyclopaedia. The film shows how she dies a kind of rock star’s death at 41, leaving Reddy wracked with guilt. If not for Roxon’s support, we would never have heard of Helen Reddy. She throws a fund-raising party for Reddy at which Reddy meets her future husband and manager, Jeff Wald, and then, when Wald’s abusive personality and cocaine addiction threaten their marriage, encourages Reddy to join the women’s movement and write I Am Woman.

Helen leaves NYC and follows Wald to L.A. where he has promised to launch her career. To finance the Hollywood dream house Wald has splashed out on, he works hard, gradually becoming one of the biggest rock managers of the era. If it was love at first sight, love is not enough to sustain an unequal partnership. It is bad enough that Wald is neglecting his wife’s career, but when he criticises her for not doing the housework, she gives him an ultimatum: persuade Artie Mogull (who signed Bob Dylan and Peter Paul & Mary) to record a single or else.

The soap-opera story is so compelling that you are never bored, and it is hard to take your eyes off Cobham-Hervey’s elegant body and interesting face, even if you can tell she is not singing. Cobham-Hervey looks so thin in some scenes that it is not surprising when the film shows her collapsing on stage from exhaustion and stress. It is a shame though that, despite the support of Reddy’s son with Wald, who is “co-producer”, with a couple of exceptions, we are not hearing Reddy’s voice and original recordings, but the admittedly talented Chelsea Cullen.

It is not known why Emma Jensen, who wrote the disappointing, if feminist-orientated biopic Mary Shelley was hired to support a director who needed a stronger script. Like many biopics, Jensen rushes us through the big milestones and Moon’s job is to connect the dots. Ironically for a feminist film, the emphasis is on the disintegration of a marriage rather than Helen’s short but explosive singing career.

The only time we see Reddy in the recording studio is when she has been granted one chance to impress Artie Mogull, who has paid for a demo. After a pep talk from Wald, Reddy stuns the weary sound recordists with a soulful, I Don’t Know How to Love Him, from Andrew Lloyd Webber’s new musical, Jesus Christ Superstar.

Apart from a few good scenes with Roxon, there is little sense of Reddy operating in a competitive industry full of burgeoning stars. A short scene around the release of Delta Dawn, would have sufficed to add that missing layer. Tanya Tucker’s version of the Larry Collins/Alex Harvey song was a hit at number 6 in the charts, and Bette Midler was hoping to better that in 1973. That is, until Reddy’s recording was released just two days before Middler’s, forcing a fast change in her marketing strategy. Reddy’s Delta Dawn shot to number 1, but Midler’s substitute, Boogie Woogie Bugle Boy, did not do badly either, landing in the top ten.

While we see Reddy jotting down those cherished lyrics to her first original song, I Am Woman, we never hear about how the music was written to fit the lyrics, why she did not continue writing original songs, or anything about her film career.

In that regard, there is a trade-off in having the support of Jeff Wald and his son (Helen Reddy saw the completed film before her death), but Traci seems to be out of the picture. For a film about why women have to be so strong and invincible, it skirts around how, after Reddy divorced Wald, he used his influence to get her blacklisted, which explains why she quickly disappeared from the charts and stage. Wald had less influence in the film industry and Reddy was cast as Sister Ruth in Airport 1975 and Nora in Pete’s Dragon, where also sings on the film’s soundtrack. In 2006 she wrote her autobiography, The Woman I Am.