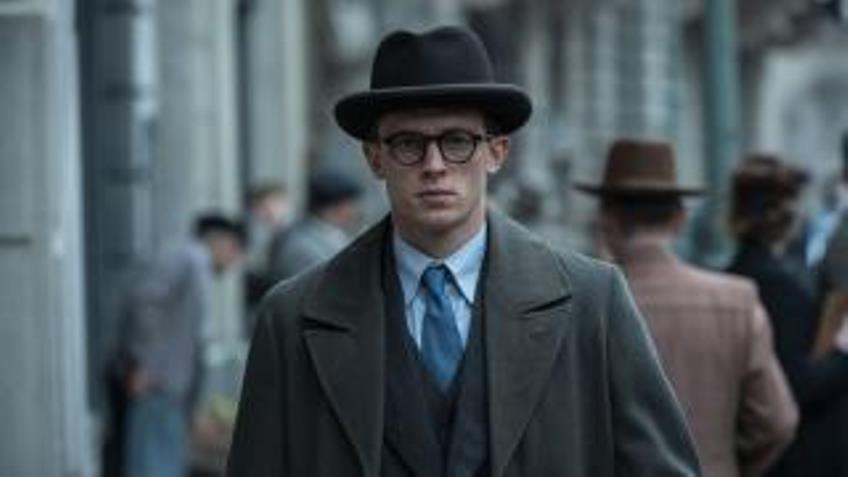 This Robert Harris adaptation injects suspense into a historical drama.

Joyce Glasser reviews Munich: The Edge of War (in select cinemas, January 7th and on Netflix from the 21st) Cert. 12A, 130 mins.

The hundredth anniversary of World War II came and went, leaving us with a few more films about the war to add to the significant number made from the 1930s through to the 21st century. Just when you thought you had seen the last of them, comes scriptwriter Ben Power’s taut adaptation of Robert Harris’s page-turner Munich, about a little-known chapter in this well-covered war. It is a chapter about diplomacy and not trench warfare, but with its atmospheric location shooting, and director Christian Schwochow’s ability to create suspense when the outcome is known, Munich: The Edge of War turns an historical drama into a thriller.

And then there are the two lead performances: reserved and controlled and all the more convincing for it. Straight out of central casting with his clean looks, relaxed Tux and posh accent, student Hugh Legat (George MacKay, 1917, The True History of the Kelly Gang) meets German student Paul Hartmann (Jannis Niewöhner), both bilingual, at Oxford in 1932, and they hang out together with Paul’s pretty German girlfriend Lenya (Liv Lisa Fries).

Later in the film, a flashback shows the three students arguing over Hitler’s ascendance when Hugh and Lenya want to attend a rally as a spectator sport. Paul argues that ‘voting for Hitler is not voting against the Jews’ and, in solidarity with the young, male German crowd, he declares that ‘Hitler is the future.’ Lenya and Hugh leave Paul, and Hugh returns to London, his friendship with Paul ended.

In the late summer of 1938, as Hitler prepares to invade Czechoslovakia, allegedly to reclaim the predominantly German speaking and ethnically German Sudetenland, Prime Minister Neville Chamberlain (Jeremy Irons), intent on preventing a war, heads to Munich to sign what will become The Munich Agreement. France joins the UK to put diplomatic pressure on Czechoslovakia, while Poland and Hungary join Germany in increasing the military pressure. Hitler reassures world leaders that once he consolidates the Sudetenland, territorial conflicts will cease. Eager to appease Hitler and prevent war, Chamberlain is set to sign on 30 September.

Six years after declaring that Hitler is the future, Paul, now a diplomat, is working with an underground group to ensure that he is not. In the film, Paul is part of the Oster Plot, a plan to assassinate Hitler if Germany invades Czechoslovakia. Paul has obtained from his married lover Helen (Sandra Hüller) Hitler’s secret plan for European domination. It provides ample proof that Hitler never intended to stop his conquest with a part of Czechoslovakia.

How can Paul get this document to Chamberlain? The answer is by smuggling the document on a train to Munich, for Paul is now assigned to the translation unit in Munich. As we know from Alfred Hitchcock and Agatha Christie, no mode of transportation can match the train when it comes to intrigue, and Schwochow makes the most of it. The tension rises when Paul’s old school friend Franz (August Diehl), now a policeman in the Orpo, if not the SS, knocks on Paul’s cabin door on the overnight train and is later seen searching the cabin.

Working independently of the Government, MI6, which has learned about the document if not about the Oster plan, arranges for Hugh to accompany Chamberlain’s entourage to Munich, particularly as he speaks German. Hugh is surprised to learn that the real reason is to make contact with his former school mate, Paul and then serve as liaison between Paul and Chamberlain.

In between the British diplomacy and political office scenes are domestic scenes showing how Hugh’s job is affecting his marriage to Pamela (Jessica Brown Findlay). Although the filmmakers want to show the pressure everyone is under, these scenes are annoying, particularly as Pamela cannot seem to understand how, at such a pivotal moment in history, a husband who is the secretary to the Prime Minister, might be sworn to secrecy or required to work anti-social hours.

A sign that this film was once destined to be a miniseries is the return of Lenya, who was Jewish and has paid the price. As shown so effectively in Florian Henckel von Donnersmarck’s wonderful film, Never Look Away, the Nazis operated a euthanasia program to get rid of troublesome women, particularly if they exhibited odd behaviour or had actual mental health issues. The doctors were intricately linked with the SS.

Paul takes Hugh to a secret hospital where Lenya, now traumatised to the point of being a vegetable, is cared for at Paul’s expense. This whole subplot should have been dramatised or, better, cut altogether, as it is too grotesque and important to be treated as an afterthought, or footnote.

Eliminating these superfluous subplots would leave more time for the electrical interaction between Paul and Helen, Paul and Hitler (Ulrich Matthes) – who seems to sense that Paul is more than an official translator – and between Hugh and Paul who find themselves working toward a shared goal with different levels of conviction. Hugh remains part of a diplomatic team, but Paul feels it is his individual moral duty to alert, if not save, the world, even if it means losing his life.

Mackay, who played a beleaguered, heroic soldier in the field in the World War I action film 1917 and the Australian folk outlaw Ned Kelly, here takes on a much more subtle, but no less demanding role that suits him. He is matched by Jannis Niewöhner who, in a more dramatic role, conveys a range of emotion through his eyes and body language.

After Joe Wright’s 2017 film, Darkest Hour, in which the focus is on Churchill to the detriment of a maligned, weak Neville Chamberlain, Harris adopts a revisionist reappraisal of him, although the filmmakers create an ambiguous character. Irons is never a caricature, however. He humanises Chamberlain in a moving scene in which he laments having been unable to fight in WWI but is still scarred by the scale of the senseless slaughter, as is the voting public. For him, avoiding war is the moral duty of a leader, particularly one who is sending boys to be killed. But Chamberlain is so obsessed with peace that he refuses to see through Hitler’s manipulation and an agreement without real force – even if it did give the UK time to prepare for war.