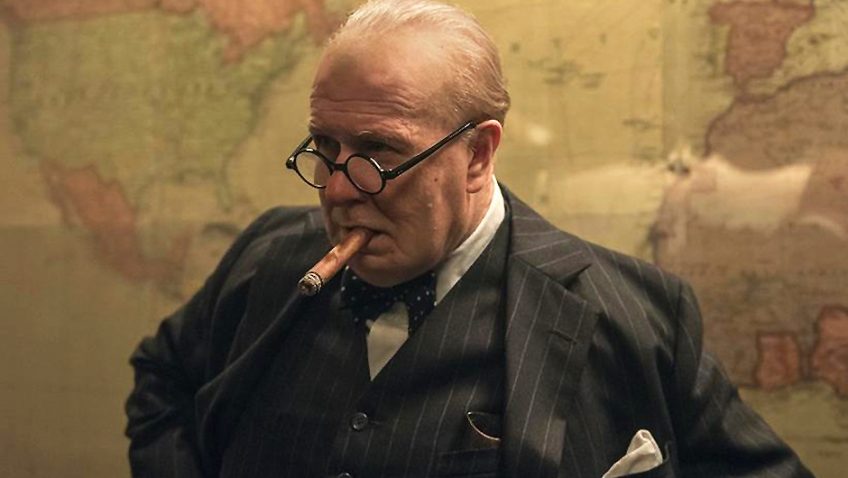 is, like last year’s Churchill a biopic about a leader’s crisis of confidence in arguably the darkest moment in English, if not British history. But Darkest Hour

has in spades what Churchill lacked: a focus on Winston Churchill’s oratorical skills; a heroic Prime Minister; and a sense of urgency and real drama, making us forget that we know the outcome.

While Churchill (from the House of Commons, he did not have a cabinet position) had been warning the government about Hitler’s true colours and the folly of appeasement for six years, he is dismissed as a war monger. But Chamberlain’s days are numbered. Just eight months after he returns from Germany waiving The Munich Agreement (which he announced was ‘symbolic of the desire of our two people never to go to war again’), Britain was under threat and he, and his Foreign Secretary, Lord Halifax, look ridiculous. They are still talking about appeasement when, on 9 May 1939, Hitler invades neutral Holland and Belgium. Churchill’s persistent mistrust of Hitler coupled with his military credentials make him the likely candidate to replace Chamberlain.

Still, Chamberlain and Halifax decide to lay traps for Churchill to trip him up by showing that he is not open to considering all options. Churchill is adamant that, ‘you can’t negotiate with a tiger when he has your head in his mouth’ and steps up to the plate, even before being elected. Many, in both parties, are nervous about making a 65-year-old, erratic decision maker with a drinking problem Prime Minister.

There is a striking scene in which Churchill (who voted against Edward VIII’s abdication) and King George VI (a friend and supporter of Chamberlain) make peace over their mutual hatred of Hitler. But even after being made PM, and even with the King’s support for his small boat plan, with so much at stake, Churchill prevaricates. His desperate gamble to divert the full force of the German military offensive from the English Expeditionary Forces in Dunkirk is a brilliant military strategy and provides a chance for his Operation Dynamo to succeed. But in a few tense scenes, we experience the nail-biting siege of Calais, where, ultimately the entire British/French garrison falls with some 14,000 dead.

When faced with the grim news of the fall of the last defended position between the German army and England, and when a heart-breaking SOS call to President Franklin D Roosevelt fails (because the USA is signatory to the Neutrality Acts of the 1930s), Churchill considers Mussolini’s offer to broker a deal between Germany and Britain. The origins of his doubts go further than the 1915 Gallipoli Campaign mentioned in the film. In fact, Churchill might also have been haunted by his disastrous plan to help the White Army by seizing control of the trans-Siberian railway during the Soviet Revolution; to restore the gold standard in 1925, which led the nation into recession; and to oppose Indian Home Rule in 1931, although the resulting bungled Partition that resulted in millions of deaths had not yet occurred.

Once Churchill decides to trust his instincts, he has to convince all those around him. Wright’s great talent for framing shots puts us at Churchill’s side throughout this process and Antony McCarten’s (The Theory of Everything) intelligent script that focuses on Churchill’s two great speeches written between May and June 1940, become the film’s plot points. A beautiful score from Dario Marianelli and Bruno Delbonnel’s stunning monochrome cinematography enhance, but never overpower the drama and emotion.

We watch (with some comic relief) as Churchill spends hours and hours composing, refining and rehearsing his speeches, even in the ‘privy’ (which leads to a witty pun on the Privy Chamber). All of this – and Churchill’s penchant for leaving the bath semi-nude, cigar in hand, warning any female staff to look away – is true.

In an essay when he was 23, Churchill recognised that, ‘Rhetorical power is neither wholly bestowed nor wholly acquired, but cultivated. President Trump’s attempts to compare himself with Churchill fall at the first hurdle. Churchill cultivated his skills with his knowledge of the English language and with wide reading. The words Blood, Toil, Tears, Sweat used together go back to Cicero, John Donne, Garibaldi, Theodore Roosevelt and to Churchill himself, who tried them out for years before using them to dramatic effect before an undecided and frosty House of Commons, on 13 May 1940. The speech is a master class in persuasive writing and Oldman’s delivery is second only to Churchill’s. In 1897 young Churchill wrote that ‘before he can inspire them (the multitude) with any emotion he must be swayed by it himself’ and there is no doubt that Oldman is swayed to the core by his words.

Right before delivering his speech, however, Churchill is still on the verge of negotiating surrender. In an obviously fictional scene, Churchill improbably risks missing his big date in the Commons to consult with the common people in an impossibly slow underground. Churchill apparently did disappear to bounce ideas off the common man, but this mushy, patriotic scene is overkill and undermines the film’s authenticity.

The same can be said of the annoying presence of Churchill’s new, much abused, shocked, but stoical secretary Elizabeth Layton (Lily James) in the gallery mouthing the words to his great ‘We shall fight on the beaches’ speech that she (and, in fact, many other secretaries) typed in all its drafts long into the night.

Despite the familiarity of the much rehashed story, Oldman’s voice lessons and hours of prosthetic make-up, Darkest Hour

is not a case of an actor chasing an Academy Award; but of an actor chasing his character and nailing it. And 80 years on, the messages are more relevant than ever. Nowadays politicians invite tears of derision, but with the UK at the brink of annihilation, Churchill is a leader whose heartfelt speeches still have the power to open the tear ducts.