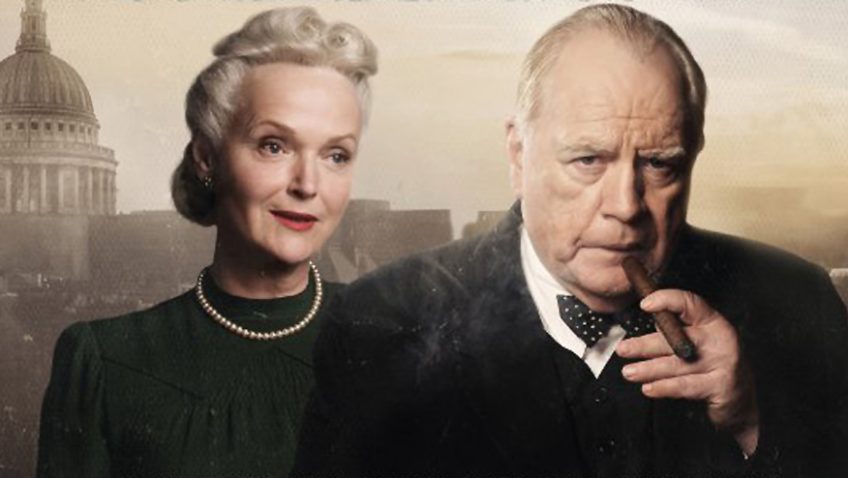 This biopic is no match for Brian Cox’s powerful performance

Be wary of films that open on a wintery beach with an elderly man talking to himself – just loud enough for you to hear his profound meanderings. In this case, the man talking to a symbolic blood red sea before falling to his knees clutching his chest is instantly recognisable as the eponymous Winston Churchill. ‘Beaches always bring it back,’ mutters the old man. ‘So many dead. Such a waste.’ The beach, now shot in black and white, and is strewn with dead bodies.

If that heavy handed opening were this worthy and intrepid film’s only problem, Brian Cox’s powerful performance could be admired less apprehensively. But it is difficult to be at ease with director Jonathan Teplitzky (The Railway Man) interesting, but misjudged biopic.

Churchill (Brian Cox) is Prime Minister, a job bestowed on the 66-year-old First Lord of the Admiralty in 1940 after Chamberlain’s resignation. The public looked to the energetic, respected military hero to lead them through the war, although he was unpopular with those who held out for a negotiated settlement with Germany. Lead the country through the war he has done, but it is now half way through the fourth year, and Churchill is oversleeping on a big day. His long-suffering wife Clementine (Miranda Richardson), the first lady of ‘if looks could kill’, wakes him in his untidy office which seems to double as his private bedroom.

As discussion turns to what Churchill should wear, he is introduced to his new secretary, Helen Garrett (Ella Purnell). Helen’s purpose is to bring out the petulant side of the overburdened PM, and to provide a soppy moment when it transpires that her fiancé is a soldier in Operation Overlord. For now, the hero worshipping young woman’s purpose is to elicit a witty line. Rehearsing the precise wording of his speech to the war cabinet, he chides her, ‘I’m debating between ‘trials’ and ‘tribulations’ and you’re adding to them.’

The main challenge for Winston Churchill in this film is not the Germans, but the Operation Overlord strategy to liberate France. Churchill is haunted by his disastrous miscalculation in World War I, specifically with regard to Gallipoli, and the inhumane, wasted loss of life in that war. Closer to home is the body count from Dunkirk. But Churchill annoys the Supreme Commander of the Allied Forces, Dwight (Ike) D Eisenhower (John Slattery), and Field Marshall Bernard Montgomery (Julian Wadham), the British commander of the Allied ground forces, when he makes a distinction between warfare and butchery, predicting their plan, if not tweaked, will end in tragedy.

Ike tells Churchill respectfully that he has to let them do their job. Churchill argues: ‘You’re asking a quarter of a million young men to risk their lives,’ to which Ike replies: ‘That’s their job, isn’t it?’ In another scene, Monty warns Churchill about the content of his proposed talk to the troops: ‘No one must undermine their confidence. I need those men to see Red,’ he says, (not referring to the Russian allies or the sea we have seen in the prologue). Churchill listens to Montgomery’s speech and in a gesture of professional good will, gives it his seal of approval. The problem with the early scenes is that, as directed, Churchill strikes us as confident, bullish, wise, well-informed and superior to his colleagues. This is in keeping with our image of the man. When this turns out not to be the case we are confused that he stands squarely on the wrong side of history. We are certain he will pull some rabbit – unknown to general history texts – out of his hat and propose some astonishing amendment to their plans for which he will win plaudits.

But there is no rabbit. He is patronized and goes home feeling sorry for himself – turning old before our eyes. Cox, the exact same age as Churchill was in 1944, is so convincing both as the subdued hero and the irascible PM, that he is the filmmaker’s best weapon. Unfortunately, the film is not a match for his powerhouse performance. It is well-known that Churchill obsessed over the death count, no doubt a reaction to the wholesale slaughter he witnessed in WWI. But there is no evidence that he wanted to call off the largest military operation in history four days before it began and prayed for bad weather to delay the plan.

What the film is really about are men who are promoted out of their active job into a desk job. This theme has general relevance not only to misguided promotions, but for those that are inevitable as one grows older. The test pilot who is made Head of NASA; the teacher who is made Head Mistress; the builder made supervisor; the tennis player turned coach or radio announcer. Churchill has to come of age.

Struggling to stay relevant, Churchill plans to sail to the beaches of Normandy on HMS Belfast, before a patient and sympathetic King George VI (James Purefoy) reminds him that their duty is ‘not to fight; not to die, but exist and bring hope.’ George has learnt the lesson, but by the time Churchill does, it’s too little, too late.

Once Churchill is resigned to his fate he turns to what he does so well: he writes a speech to the nation about the no-longer-secret audacious plan. Here’s where the filmmaker’s missed a trick. For what is this film if not The Prime Minister’s Speech, a variation of The King’s Speech? Unfortunately, Churchill’s speech, while dramatically directed, does not serve a similar function. Why not cut away from the close up on Cox’s passionate delivery to Eisenhower, Helen’s boyfriend and Montgomery in the midst of action, listening to the speech with a renewed admiration for the man who has rediscovered his purpose?

is competently made and will hold your attention, Teplitzky is not known for his pacing, and researcher/historian/author Alex Von Tunzelmann’s script struggles to find the drama in the history lesson. That is one thing, you might have thought, that we would not have to worry about. After all, Von Tunzelmann writes the Reel History column in the Guardian, rating movies on their historical accuracy.