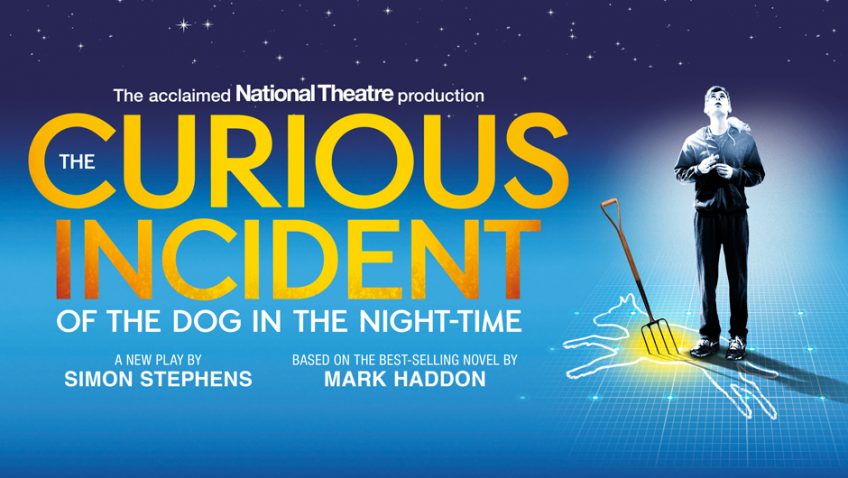 This production represents the return of this smash hit play to Bristol’s Hippodrome, it last having been performed here in 2015. It is adapted by playwright Simon Stephens from the 2003 novel by Mark Haddon and has been a success wherever it has been performed. It has won many awards and is widely regarded as a modern classic, drawing audiences from across the spectrum with many younger people perhaps getting their first experience of theatre going as a result of this play. The Curious Incident of the Dog in the Night-Time UK & Ireland Tour Cast, photos by Brinkhoff/Mögenburg

The main character is a 15 year old boy called Christopher Boone who finds day to day life very challenging but is blessed with a talent for maths and solving mathematical problems. Christopher suffers from Asperger Syndrome although he never refers to his condition as such, preferring to say that he is ‘someone who has behavioural problems’. He attends a school for pupils with special needs because his poor social understanding causes him confusion and results in the aforesaid ‘behavioural problems’. These are triggered by things not going according to ‘his’ plan, by people saying things where the meaning is not clear, by crowds and by loud noises. However, Christopher is also extremely logical in his thought processes, as evidenced in his maths skills. He sees patterns in numbers that allow him to solve very complex mathematical problems and he is able to uses logic to help him work out how things happen.

The play opens by Christopher discovering his neighbour’s dog dead in the garden, killed with a pitch-fork. This sets off a thought process in Christopher who, despite his father’s protestations, becomes determined to follow in the footsteps of his hero, Sherlock Holmes, and solve the question of who killed the dog. So Christopher’s journey begins.

And what a journey it is, a journey that many of us cannot even begin to imagine as Christopher begins to piece together the clues in his search to find the truth. It shows just how difficult modern life is for Christopher, the effort he has to expend to just to talk to people and how he overcomes what most people consider simple tasks, such as buying a train ticket or travelling on a tube train. Ultimately, it shows how Christopher solves the crime.

Throughout the play, the set is just as important as some of the characters, helping to map out Christopher’s journey. It is based on a mathematical grid structure and cleverly uses lights, video projection and sound to portray both the chaos and logic going on in Christopher’s mind and the journey that he is undertaking. The Curious Incident of the Dog in the Night-Time UK & Ireland Tour Cast, photos by Brinkhoff/Mögenburg

Having seen the show I can only say that Scott Reid who plays Christopher must be physically and emotionally exhausted after each performance. The amount of energy and effort he expends in portraying the lead character is exceptional. He is supported by a cast and a set that really do help us to understand what it must be like to live in Christopher’s head!

This is a play that will tax you but I guarantee it will also make you think – think about what it must be like to live a life like Christopher’s. It is a difficult subject, but is exceptionally well portrayed and presented – it rightly deserves all the plaudits that it gets.

The Curious Incident of the Dog in the Night-Time is on tour at venues across the UK until September 2017 . Visit http://www.curiousonstage.com/uk-tour/ to find out more.