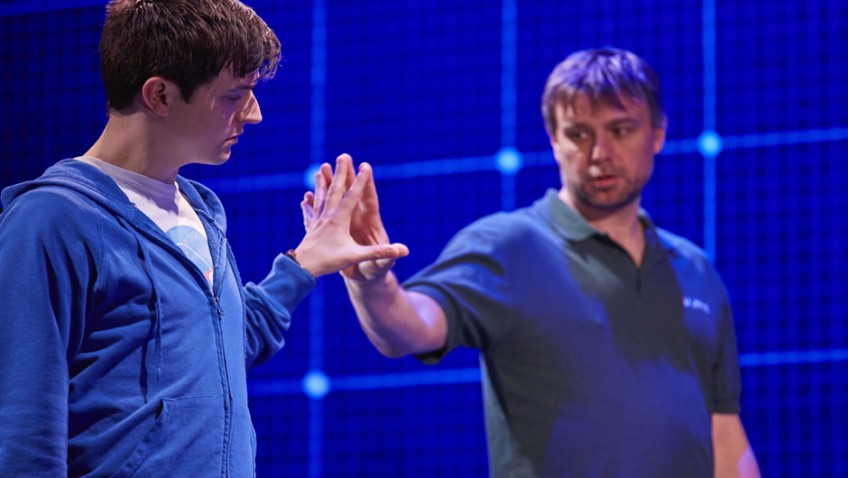 There is nothing ‘curious’ about the success of this production

The Curious Incident of the dog in the Night-Time is a play adapted by Simon Stephens from the 2003 novel by Mark Haddon, which received huge critical acclaim when it was first published.

The story is told in the words of the main character, Christopher Boone, a 15 year old boy with an exceptional, analytical brain who considers himself to be “someone who has behavioural problems”.

It tells of a mystery surrounding the death of a neighbour’s dog, investigated by Christopher and leading him on a frightening journey that upturns the world of a boy who is ill-equipped to deal with everyday life.

Whilst the novel is told in the first person, the play is presented as a reading of Christopher’s book (that he writes during the course of the performance) and is read partly by his teacher and partly through his and the cast’s own dialogue.

Through the quality of the acting, set, music and lighting, the audience is transported into the mind of the complicated teenager, portraying how he copes with all the experiences of the outside world that he has sheltered himself from up to this point in his life. Together they combine brilliantly to represent the rules and regulations he has put in place to cope with the unfamiliar, the emotions he goes through and just how he struggles to communicate with strangers. The set (a mathematical–like grid system which projects maps to portray Christopher’s journey, or lights up a kind of matrix to portray the chaos going on in his head) is extraordinary.

The contemporary music also adds momentum to the panic and confusion in the teenager’s, pulling the audience along in a crescendo, then coming to an abrupt end when at times he has a complete melt down.

The acting is of equal quality, in particular from Joshua Jenkins who plays the lead and is remarkable. The audience is drawn into the difficulties Christopher’s parents have in communicating at times and their ways of showing tenderness and love to him with little physical contact.

The rest of the cast each plays numerous roles and also become part of the set, morphing into various objects such as steps and beds and adding to the depth and movements of the storyline.

This production is outstanding and certainly the audience at the Bristol Hippodrome agreed as they rose to their feet for a standing ovation.

The Curious Incident of the Dog in the Night-Time runs until the 8th August 2015 in Bristol.