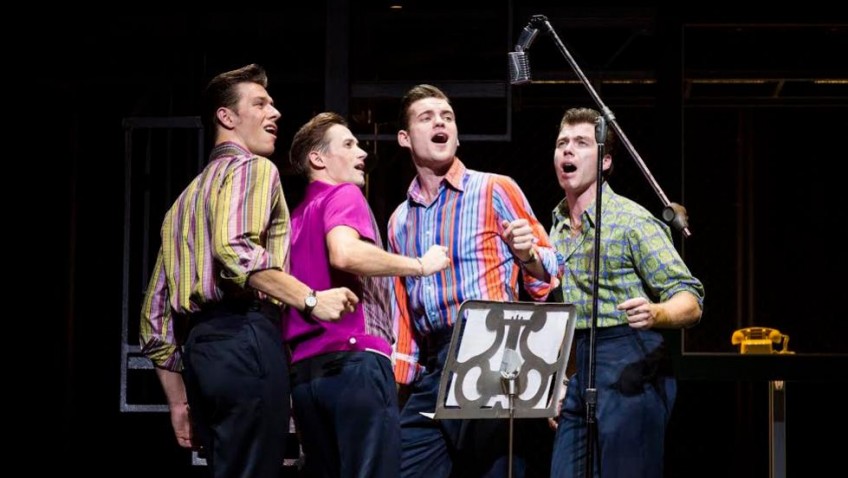 Oh, What a Night!

It’s not late December, 1963, it’s a non-descript Wednesday night in May 2015 in The Hippodrome in Bristol and it’s the West End and International sensation that is the stage production of The Jersey Boys that has hit town.

Based on the life of Franki Valli and the other three members of The Four Seasons it tells the story of a band that has, during its career that now exceeds 40 years, sold in excess of 100 million records – how many of today’s pop stars will ever hit figures like that? According to Rolling Stone Magazine this makes them the most long-lived and successful white doo-wop group of all time.

However, The Four Seasons had a darker side – with prison stretches for the various band members and links to the New Jersey Mob – there are parts of their history that conflict with the clean cut image that their managers and publicists created for them – a history that could well have de-railed their career in its infancy.  All these years on, those parts of the history of the band are not glossed over in the show – they are right there – an integral part of the story.

The show is based around the traditional four seasons of spring, summer, autumn and Winter – reflecting the birth, rise and eventual fall of the band with each season being narrated by a different member of the group.  It charts the early struggles of the group, and showcases their breakthrough with 1962 single ‘Sherry’ before rolling from hit song to hit song – and I guarantee you will know most of them – after all you don’t sell 100 million records without there being some good songs in there!

The individual members of the band all have a large part to play in the production although understandably it is Valli that takes centre stage, played excellently by Tim Driesen – and by the end of the show you realise what an honourable guy Valli was, how hard working he became, how his work ethic affected his family life, how his daughter died of a drugs overdose never really knowing her father and how loyal he remained to his band mates despite the trials and tribulations that they put him through.

If you’re expecting all gloss and the story told through rose tinted spectacles then you’ll be disappointed – if you want to see and understand the real history of the band, be entertained and enjoy some era defining songs then you won’t be disappointed!  Definitely a production for those that remember the sixties, but also one for those that want to know and understand where such great songs came from.

Go and see it – it’s a cracking night out.

The Jersey Boys plays at The Hippodrome, Bristol until 13 June and then at other venues around the UK. For a full tour schedule visit www.atgtickets.com/shows/jersey-boys/