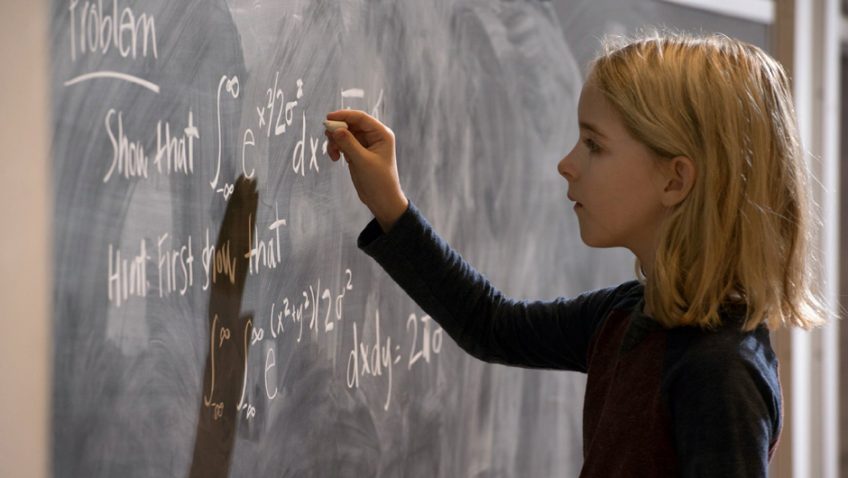 Indiana-born music video director Marc Webb was 35 when he made his first feature film: a quirky, independent, romantic comedy called 500 Days of Summer that struck a chord with the target audience. That calling card got him straight to Hollywood and into the director’s chair of the 2012 reboot, The Amazing Spider Man. Instead of returning to making his own films, he stuck around to do Spider Man 2 and became a fall guy, as no one really wanted to make or see that film. Webb must sympathise with Frank Adler in his latest feature, Gifted

There are no CGI effects, stunt men or superheroes in Gifted

. There is, however, Chris Evans (who plays the Marvel Comic superhero Captain America) as Frank Adler and there is Frank’s niece Mary (McKenna Grace), who has a super power: she is a maths prodigy who, at seven, is solving equations that baffle grad students. If this sounds fun and entertaining, it is, up to a point. If Gifted

were a true story about a mathematical genius, like Hidden Figures or the Man who Knew Infinity, we could cut it some slack. But for a fictional film to be so predictable, so manipulative and lacking in subtlety is as curious as it is unforgiveable.

Mary (Grace) has been living in a cramped, very basic Floridian bungalow with her uncle Frank (Evans) since her mother, a mathematician on the verge of solving the Navier-Stokes Problem, committed suicide. Frank never wanted to be a guardian, with the sacrifices the job entails, but he is better at the job than he thinks. Seeing what happened to his sister, and observing Mary as she is home schooled, he wants to give her the option of having a normal life. This means attending the local school where she can integrate with normal kids of her age.

Mary stubbornly resists, while, in a subtle form of foreshadowing, kindly neighbour and occasional childminder Roberta (Octavia Spencer) warns Frank about opening a can of worms. She is afraid of social services interfering when Mary’s gifts are discovered.

At school, Mary rebels and gets into a fight which almost has the desired effect of having her expelled. But teacher Bonnie Stevenson (Jenny Slate), who is Frank’s age, single and sympathetic, has the perfect excuse to introduce herself to a good looking, eligible bachelor, even if he is not the most welcoming chap. ‘I think your daughter may be gifted,’ she tells Frank, who, of course, was hoping no one would notice. He rejects the principal’s offer to get Mary a scholarship to a ‘special’ school.

Bonnie is on a mission once she gains Frank’s trust and Mary begins to soften to the teacher. This is just as well as Frank needs all the allies he can get. He is soon dragged enter into a big custody battle with his estranged mother, and Mary’s grandmother, the wealthy Bostonian socialite Evelyn Adler (Lindsay Duncan). Last year’s Captain Fantastic will probably comes to mind. In that film a widower who has home-schooled his accomplished children in an alternative lifestyle setting, battles with his wife’s rich grandfather, who wants to normalise the children and send them to expensive private schools. But unlike the grandfather, Evelyn has an ulterior motive for her fierce desire to uproot Mary and live through her vicariously. When the custody battle goes to court the judge urges the parties to agree on a curious compromise.

is completely absorbing, thanks in part to McKenna Grace’s refreshing performance and, let’s face it, our intrinsic interest in gifted kids. There’s a great moment in the film when Evelyn takes Grace to be tested by a sceptical professor friend (Keir O’Donnell) who intentionally designs an erroneous equation so that Grace cannot answer it.

When they exit the test room in disgrace, Grace tells her disappointed grandmother that the problem was wrong. When asked why she didn’t say anything at the time, Mary replies, ‘Frank tells me I’m not supposed to correct old people. Nobody wants a smart ass.’

There is always the risk that the audience will end up more irritated with than enamoured of a child prodigy but, even at the film’s most mawkish moments, Grace confounds our expectations with an inventive, natural performance.

It is Tom Flynn’s script that proves irritating. Frank and Bonnie are saints (and of course, they become romantically involved) while Evelyn is The Devil, a role that Lindsay Duncan clearly relishes. Evelyn surrounds Mary with tutors, pushing her, we are meant to believe, until she does what her mother did! The piano that Frank could not afford appears in the foster family’s house as part of the pact with the Devil, but we never see Mary play it. Presumably, her maths drills take priority. The charming foster parents turn out to be inhuman, too, and then shamelessly, the filmmakers send Mary’s beloved cat to the vet to be put down.