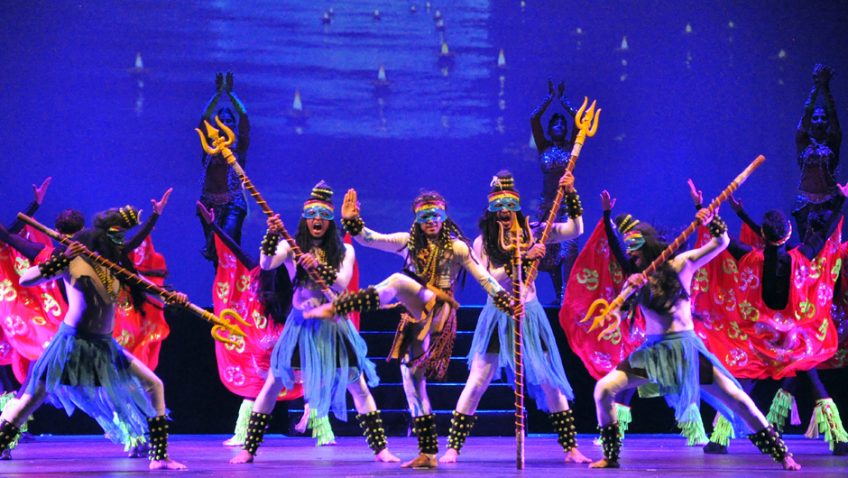 Taj Express is an Asian musical featuring the songs A. R. Rahman

For me Taj Express brings back 40-year-old memories of a luxurious train journey from Delhi to Agra to see The Taj Mahal. The carriage seating was richly cushioned throughout for maximum Mogul comfort. Staffs were in constant attendance with food and drinks. It was like travelling in state. The journey was slow, gentle, leisurely, and definitely not express. I felt I was living in another time, the pre-World War 2 era of the British Raj

The Taj Express musical could not be more different, operating as it does at high speed. The show is given the full Bollywood, vibrant, larger-than-life, extravaganza treatment, and will obviously have a strong appeal for Asian family audiences who were out in force at the Peacock Theatre.

The production, which is touring the world, is by the Merchant dynasty – Shruti, Vaibhavi, Pranav, Salim and Sulaiman – and is a showcase for energetic dancing and swirling costumes in a blaze of bright colours.

The performance relies for its success on the relentlessly vigorous dancing and the loud music which features the songs of A. R. Rahman, who won an Oscar for his song, Jai Ho in Slum Dog Millionaire.

The second half is better than the first half. One of the high spots is the exquisite dancing of a supple-bodied soloist, costumed all in white

Another high spot is the playing of the guitarist Chandan Raina (who has a sense of humour) and the percussionist Prathamesh Kandalkar and the flautist Avadooth Phadke.

The plot is about a young composer who has to write the score for a Bollywood movie. The story is meant to be a satire on a typical rubbishy Bollywood love story but nobody is going to be remotely interested. And as for the Taj Express train it barely features.