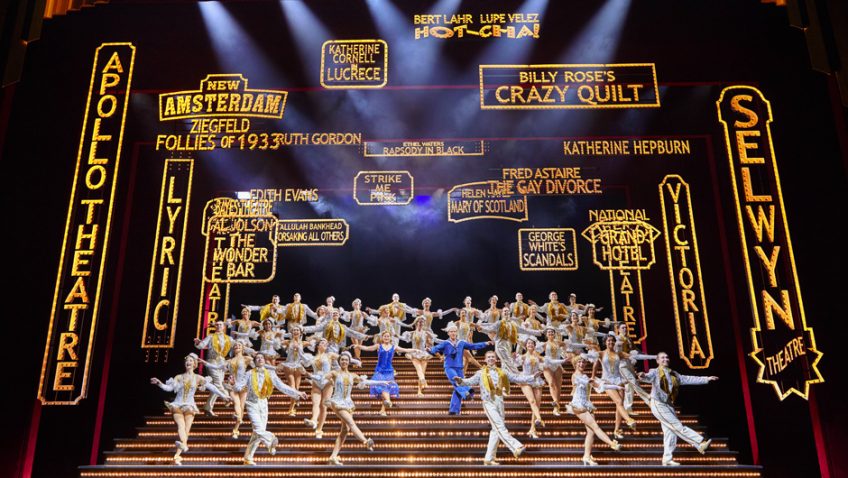 42nd Street – Hear the beat of the dancing feet!

42nd Street, the 1933 film, was the prototype for all backstage Broadway musical films in which the raw kid out of the chorus line takes over from the leading lady on the opening night and becomes an instant star.  It was in this movie that choreographer Busby Berkeley made his debut. 42nd Street, the 1980 stage musical, was brilliantly directed and choreographed by Gower Champion who died on the very day it opened in New York. The show ran for 8 years. The production came to Drury Lane in 1984.

The moment the curtain goes up on the tap “Audition” number you know the show is going to be a huge popular success all over again.

The songs by Harry Warren and Al Dubin are great and include such iconic numbers as
“We’re in the Money”, “Lullaby of Broadway”  I Only Have Eyes For You and “42nd Street”

The book by Michael Stewart and Mark Bramble is a hymn to show‑business and manages to be a parody of the genre and the real thing at one and the same time. It’s great fun, pure escapism..

Randy Skinner’s production is a spectacular no-expenses-barred song-and-dance extravaganza. The glitzy set and costume designs are by Douglas W Schmidt and Roger Kirk.

Sheenah Easton is the singing star who breaks her ankle.  Clare Halse is the chorus girl. Tom Lister (in his role as bully director) delivers the immortal line, “You’re going out a youngster but you’ve got to come back a star!” “Sunny Side to Every Situation”, the dressing-room number, on three levels, with the naked bulbs of the mirrors flicking on and off, picking out the individual members of the chorus, is lit with mathematical precision.

“Dames” is witty pastiche Busby Berkeley and a huge tilted mirror above the dancers enables the audience to see his archetypal geometrics.

The cast, led by Clare Halse and Stuart Neal, brilliant tap dancers, never stops tap dancing and it is the fantastic tap

dancing at exhausting speed which everybody will want to see. The sheer number of dancers on stage is dazzling and they look great going up and down the lighted Broadway staircase.

42nd Street is synonymous with show-biz and here it is show-biz, writ BIG, very BIG.