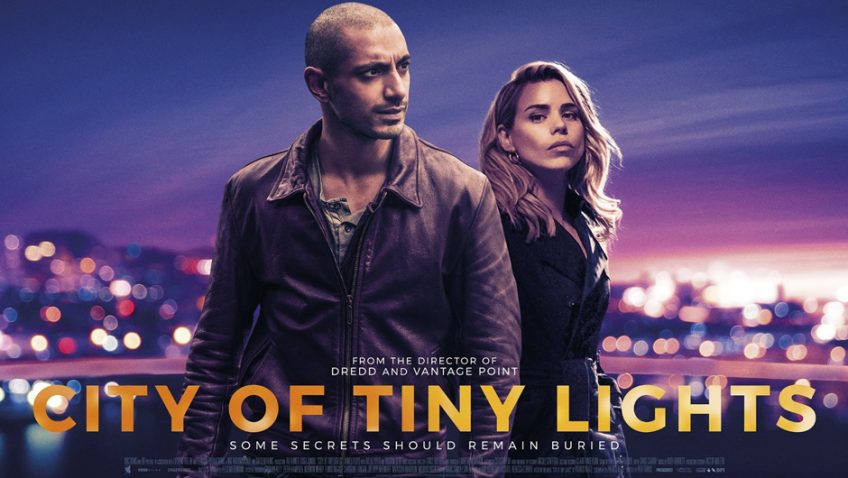 Who doesn’t like a good film noir with a chain-smoking, worn-at-the-edges, wise-cracking, gumshoe trailing some femme fatale in the pouring rain?  City of Tiny Lights has a lot of good will built into it from the genre alone.   Since the city is London and it’s now 2017, however, the film has a bigger trump card up its sleeve.  For the private eye protagonist is Pakistani (Riz Ahmed) and the two women in his life are a black hooker with a heart (Cush Jumbo) and, the love of his life, a white nightclub hostess (Billy Piper) from his past. Full marks for diversity, but Director Peter Travis (Dredd, Vantage Point) is so preoccupied with creating the look of the film that he overlooks the genre’s dependency on character and chemistry.

Private Investigator Tommy Akhtar (Ahmed) is, like the rest of his neighbourhood’s down-market high street, suffering from something more than internet shopping. Still,  he maintains his dingy, solitary office at the top of a flight of dark steps while acting as a live-in carer for his father, Farzad (Roshan Seth).  Farzad, is a first generation immigrant who, despite being diagnosed with prostate cancer, provides some comic relief.  The character of Farzad, who fought with pride in the King’s African Rifles and is addicted to cricket, feels contrived toward the politically correct, but Seth has a blast with the character. And his back-story explains why he has a gun and can use it when he needs to. Into Tommy’s depressing grimy office walks a high class sex worker named Melody (TV’s The Good Wife’s Jumbo), who wants Tony to find her missing flat mate, Natasha.  Scriptwriter Patrick Neate injects humour into the script which had the young audience surrounding me in stitches.  In this scene, he highlights how times  since Philip Marlowe’s day, when  Melody tells Tony that she found him on an APP.

‘I charge £300 a day plus expenses,’ says Tommy, adding somewhat patronisingly, ‘that’s the best I can do.’

Extracting the cash from her bag, Melody replies, ‘I charge £300 an hour.’

Capitalising on their ethnic PI, the filmmakers take Tommy into territory where your average film noir never treads: an Islamic circle and a suspect Mosque. This plot line delivers a scary scene that sees Tommy confronting a touchy Mullah (Alexander Siddig), and hiring a local boy to go undercover in an Islamic youth group.  This subplot might have provided more tension if the outcome were not so obvious.

The investigation also takes Tommy into much more familiar terrain: the London property market.   “I deal in secrets,” says Tommy in his annoyingly erratic narration that disappears for long stretches of the film. “I dig them up or I bury them.”  It’s a good thing he tells us this, because that is just what happens when he digs up some secrets he might have wished had remained buried.

After Tommy’s investigation uncovers a corpse in a Holiday Inn in Paddington Basin, the case becomes personal as two people from his teenage past emerge.  The first is his former best friend Haafiz (Antonio Aakeel/James Floyd), nicknamed ‘Lovely’ for his good looks, now making money in the London property market.  The second is Shelly (Billy Piper), a swanky restaurant hostess who knows some slimy people.

So eager are Travis and cinematographer Felix Weidemann to create a nocturnal atmosphere to rival Nightcrawler, that they add lurid flashes of coloured neon lighting to the nightscape as though we are a Wong Kar-Wei movie set in Hong Kong.  The strobed colours are enough to give you an epileptic fit, even if you have never suffered one.

But the main problem with City of Tiny Lights is that Neate’s script and Travis’s meandering direction fall well short of a tense, satisfying and coherent thriller.

If you’re going to give a star such as Billy Piper top billing, you have to give her something to do. Shelley is not only a nebulous character, but you don’t believe anything about her.   And if you want your film to feel like The Big Heat, you have to ensure there is chemistry between the central couple.  Ahmed has the looks and Piper the sex appeal, and both have the talent, but there are no fires lit under their scenes.  It’s not only their respective physical sizes (she looks like she could accidently eat him for breakfast), but a lack of any connection between the two.

Nor is it sufficient to give us a gumshoe who happens to be Pakistani.  Akhtar is a role that someone like the charismatic Jason Statham or a younger Bruce Willis might have managed to make their own, but Ahmed needs something more out of the script than whisky and an interesting relationship with his father. He produced a multi-dimensional character in his breakthrough role Shifty, a two-hander with foil Daniel Mays and was completely credible as a would-be terrorist in Four Lions. He hit the mainstream running with a supporting role in the Nightcrawler, and has been acclaimed in HBO’s The Night Of.  Here, deprived of action scenes and an interesting character, he’s not enough to carry City of Tiny Lights.